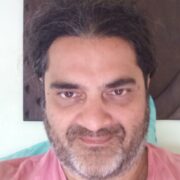 I am an American citizen of Kashmiri origin currently residing in Srinagar, Kashmir. My roots are deep. Both my parents were born here, as were both sets of grandparents, and their forebears. I came here to reconnect with my ancestral roots and meet old friends, some of whom I have known all my life. I am also researching a book and a film project set here.

Walking through the old streets and alleyways, taking in the smells and sounds of the ancient city, it’s bustling bazaars and quaint multistory wooden houses, I could not help feeling a sense of déjà vu, as if this was only one of several lives I had lived as a Kashmiri. It ignited a latent desire in me to do something for this town and its residents. I embarked on an ambitious project, one that would benefit the local artists, writers and craftsmen, and revitalize the cultural life of the city.

It has been a largely pleasant and productive time in Kashmir with only one major hiccup to speak of. Some time back, an old article published almost a decade ago caught my eye. I reached out to the author Azad Essa, a resident of Brooklyn, New York, and complimented him on what appeared to be a balanced piece on Kashmir’s minority Pandit community.

A few days later I saw Azad Essa on Twitter promoting an interview in which he compared Kashmir to Palestine, proclaiming loudly that all non-Kashmiris staying in Kashmir were “settler-colonialists.” It didn’t end there. In Essa’s view, the Kashmiri Hindu minority, which had been targeted by radical Islamists and forcibly expelled in the early 1990s, also qualified as settlers — part of the “India project” — unless they severed all ties with India.

I expressed my dismay at his extreme views on the Kashmir issue. He responded by saying he had always held the same views and then went on to label me a “collaborator” — because I had returned to Kashmir without surrendering my Indian identity. In Islamist terminology, “collaborator” is a person disloyal to the separatist movement and hence marked for elimination.

A few years ago, the veteran journalist, Shujaat Bukhari was murdered outside his Srinagar office by unknown assailants. In the days and weeks prior to his death, he had been marked as an “Indian tout” by anonymous bloggers. Radical Islamists fighting for independence from India clearly perceived him as a threat and had him bumped off. Bukhari’s death was a great loss as he was a sensitive and compassionate soul who knew the fault-lines as if they were scars on his own body and worked all his life to heal the wounds between two communities.

Bukhari is just one of many who had to suffer the consequences of attempting to broker peace in a highly vitiated environment. In 2017, Deputy Superintendent of Police, Mohammed Ayub Pandith was mutilated and lynched to death by a bloodthirsty Islamist mob in Nowhatta, and only a few days ago BJP councilor Rakesh Pandit was gunned down by terrorists in Tral where he had gone for an informal visit. A year prior to his death, a Congress leader Ajay Pandit was killed in a similar manner.

It is incidents like these that make it difficult, if not impossible for Pandits to return to their homeland with a modicum of safety and security.

Interestingly, a few days before my encounter with Azad Essa, an Indian American activist, Sunita Vishwanath, co-founder of a self-styled “advocacy group” called ‘Hindus For Human Rights,’ had characterized me as an agent of the BJP on a news outlet called The Wire. The article was written in response to a critique of controversial U.S academic Audrey Truschke that I had published in The Hindu. My article showed – with evidence and quotes from well-regarded academics – how Truschke’s blatant falsifications and intentionally provocative style were negatively impacting the field of Indology. In the article, I also demonstrated how she was deliberately stoking hatred against Kashmir’s minority Hindu community.

Vishwanath’s piece was full of scurrilous, evidence-free claims that I was part of a nefarious right-wing conspiracy to silence “anti-Hindutva” forces in the West. The founding editor of The Wire, Siddharth Varadarajan, swiftly amended the article when I brought it to his attention, removed the libelous portions and issued a public retraction. It’s remarkable how a government that was elected by over 300 million Indians – same as the entire population of the United States — and its legions of supporters are casually branded as “Fascists.” Their critics are not interested in seeking solutions by listening to all voices in the debate but rather ramming through their own brand of extremism.

On closer scrutiny, I discovered that Vishwanath’s “advocacy group” was a phantom entity not listed on any nonprofit database, had never filed taxes, did not have a physical address and existed solely on FB and Twitter.

I should emphasize that the overwhelming majority of Kashmiris, whether they be Hindu, Muslim or Sikh, only wish for peace and to lead their lives with grace and dignity. This lush and abundant land has blessed us with everything apart from peace. For too long, interlocutors from the media and political class have projected their personal neuroses and agendas on us, leaving a traumatized population in their wake. Numerous fellow Kashmiris have told me how much they loathe self-serving opportunists who advance their careers by exploiting the trauma of Kashmiris while disregarding the damage it does to their families, livelihoods, career prospects and mental health.

Many of the self-appointed allies of Kashmir could care less about the wellbeing of ordinary Kashmiris. For them, my homeland is little more than a political football used for scoring goals against the other side and for raising funds. It is in their interest to keep the pot bubbling. In fact, they would have to shut shop if the situation were to return back to normal.

Long festering wounds caused by historical traumas can be healed only by understanding and compassion, not by hate, vitriol and opportunism. As such those who claim to speak for peace are often the ones farthest away from it.

(Top photo, Vikram Zutshi with a Gujjar family recently at approximately 13,000 feet in a vast meadow encircled with pines and conifers. Grandpa Ali is on far left with Uzma, Shakila, Zutshi and little Sofiya. Gujars are a nomadic tribe of goatherds and shepherds that reside in the Pir Panjal and Himalayan region between India, Pakistan and Afghanistan.)

Vikram Zutshi is a freelance journalist and critic presently based in Srinagar, Kashmir. He is an American citizen working on a book proposal set in the Valley. He writes for a number of publications in India and the West including the Times of India, Rolling Stone, Scroll, The Wire, The Hindu etc.