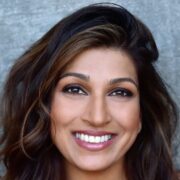 Last Friday night a primarily BIPOC (Black, Indigenous, and people of color) gender-diverse audience stood in line at the Broadwater Theatre where “Noor Inayat Khan: The Forgotten Spy,” written and performed by Almanya Narula was having its extension with the Hollywood Fringe Festival.

Inside the black box theatre with the audience on 3 sides, Almanya brought us into the world of Noor, an Indian princess, whose fierce loyalty to serving humanity led her to save countless lives in 1943 during World War II. She fought alongside her British colonizers and became the first person of Indian descent to be a radio operator in Nazi France and served to aid the resistance. The 30-minute play begins as she is captured during her third attempt to escape Gestapo headquarters and must make the harrowing decision to sacrifice her life or the lives she has been devoted to saving.

Skillfully directed by J. Mehr Kaur, Almanya takes ownership of the full physical space in dynamic ways to propel the audience from capture to torture, torture to exhaustion as information is unsuccessfully beaten out of her, and eventually, we follow her bravery to her execution.

I recommend reading the program beforehand to give you context for the piece which begs of its audience a bit of knowledge about the setting and given circumstances going into the performance. And then let yourself relax or rather, sit tensely at the edge of your seat as you feel fate loom over Noor’s head.

A most compelling moment of the night also happened post-performance when Almanya revealed that she first discovered Noor as a footnote in a book when she was ten years old. Even as a footnote, Noor’s life had a profound impact on Almanya, who has bravely committed herself to amplify Noor’s life and journey.

As we crave a new canon in American theatre where plays spotlight the journeys of people of the global majority and gender-diverse folks, we need to support these types of stories and their creators. There is a significant reason this show is the winner of the Soaring Solo Social Impact Award amongst the other laurels it carries.

It is an imperative story and play that would benefit from further development opportunities to flush out the depth and breadth of its potential. A story that needs to be heard, “Noor Inayat Khan: The Forgotten Spy,” is just scratching the surface of deep and rich history, and a brilliant and bold heroine that never should have been — and will hopefully not be a footnote anymore.

Noor’s heroic legacy has also recently been the interest of Netflix which announced last January in Deadline that actress Freida Pinto, would play Noor, in its soon-to-be-released limited series.

Minita Gandhi (she/they) is a Los Angeles-based multi-hyphenate artist and writer who was born in Mumbai, India. A seasoned stage and screen actor, most recently seen playing opposite Diane Kruger in “Swimming with Sharks” their regional theatre credits include Lookingglass Theatre and Berkeley Repertory Theatre. Her critically acclaimed solo-show Muthaland, was Jeff Recommended for best new work and solo performance and has toured nationally. It has been featured in The Atlantic in a 20-minute Emmy award-winning documentary about the making of the play:muthaland_short.mp4  She has been an advocate and dramaturg for a variety of new works and they are the director/producer for a 5-episode Documentary Series: History is Now. Other directing/writing credits include the digital production of “Hindsight is 2020 or how Raisin Rainbows survived a pandemic” starring Tony Award nominee Cora Vanderbroek. As an activist and speaker, Minita was the keynote speaker for Commit2Change in 2018, teaches workshops on activism, and does work to support survivors. Gandhi is the Founder of IGNITE, a mentorship program for BIPOC women and non-binary theater artists that connects emerging artists to national theater leaders. Learn more about Minita at www.minitagandhi.com