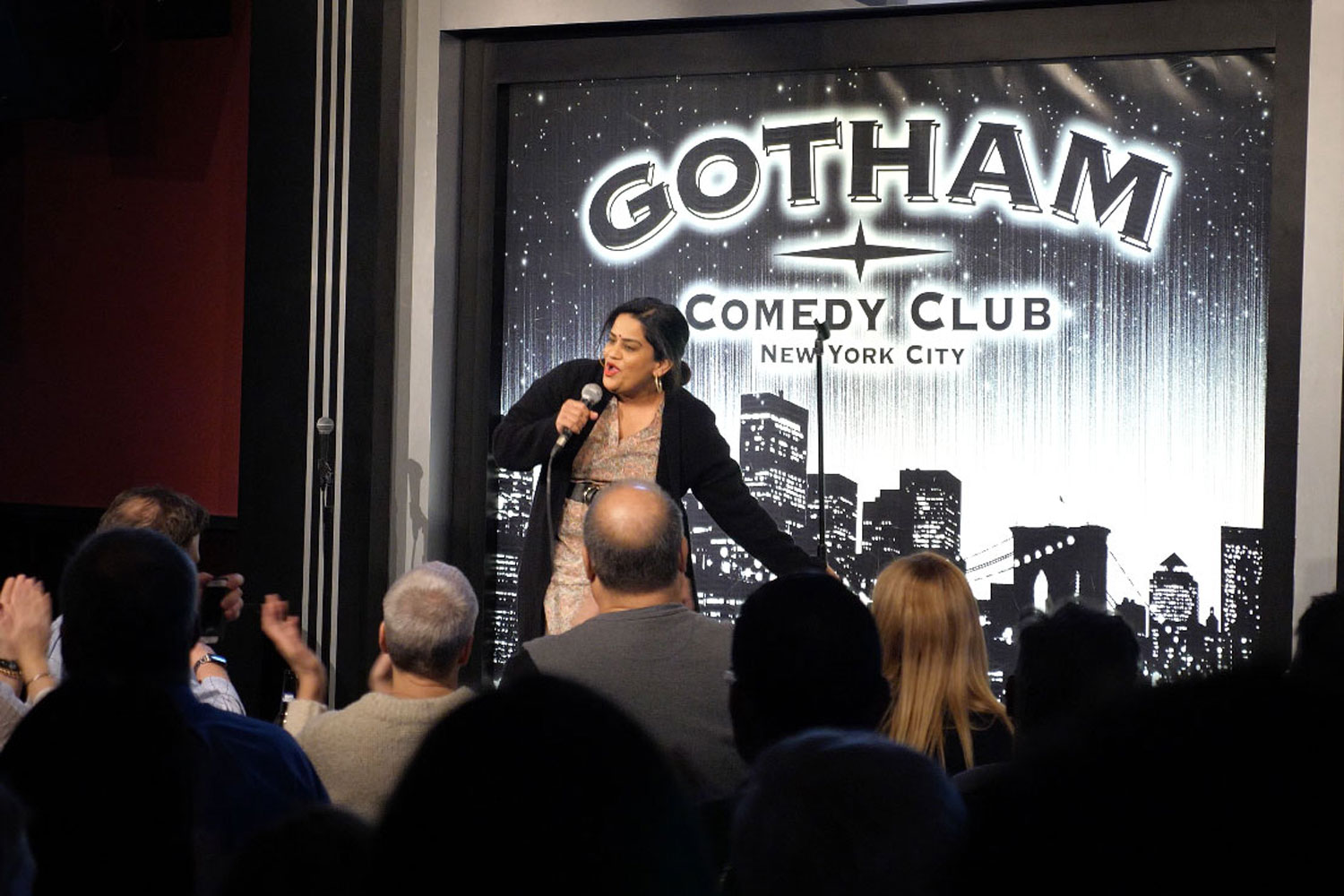 I’m a 45-year-old mother of three who moved from India 30 years ago, settled in New York, and started posting jokes about my experiences on the platform two weeks ago.

Then I got a million views in three days.

Not as shocked as my kids, who only get about 25 views on their videos, but shocked nonetheless.

While I’ve had some success doing standup comedy in the past couple years and had a screenplay I wrote win an award and get optioned, nothing that’s happened in the “real world” made me believe I’d see this kind of traction on TikTok so quickly.

It’s made me wonder…

Why is this happening?

Why does what I say resonate with so many people?

The answer to those questions may have a lot to do with another question I was recently asked.

“Why don’t more brown women do comedy?”
I was interviewed on a Rukus Avenue Radio show recently and when the host asked me that question, it stopped me in my tracks.

I’m a brown woman doing comedy, and until that point hadn’t considered how unusual that may be.

There are a handful of brilliant women out there like Mindy Kaling and Priyanka Chopra, but as a whole we’re seriously underrepresented in the comedy world.

When I struggled to answer the host’s question, she offered a theory of her own:

That really got me thinking.

Did I miss a memo and not realize I’m doing something I’m not “supposed” to do?
I left India at age 16, so it’s possible I never heard the “rules” quietly whispered into the ears of so many brown women by mothers in the hallways.

“Brown women from South Asian countries are supposed to be seen and not heard.”

Renuka Chowdhury, an Indian member of Parliament, recently laughed in public. The House reprimanded her for “flouting moral conduct.”

The vice president also told her to lose weight. Somehow I doubt any male MP has been publicly chastised for laughing or toting a few extra pounds around his belly.

The host of “The Kapil Sharma Show” regularly mocks his TV wife for her looks and weight on national TV — his actions are rewarded with raucous audience laughter.

The woman who’s the butt of his jokes is complicit. She’s laughing too.

We also have the ever-looming censorship issue in brown nations. The few stand-up comedians that exist have been reprimanded, humiliated, even jailed for their comedy.

Indian comedy team AIB (All India Bakchod) have been threatened with jail on multiple occasions for poking fun at Indian politicians. The charges were “unconstitutional humor.”

You can be an artist in India, but if you offend the wrong person in the audience, God be with you (unless you made a joke about Gods, then you don’t even have that).

Like many immigrants to the United States, I straddle two universes at the same time. I was a stay-at-home mom for 15 years, who developed an act that capitalized on three of my core truths: I’m a brown woman (Indian), a wife and a mom of three.

I try to do more than simply make people laugh — I also aim to change this narrative that Indian women are tragic, sad, sidekicks and punching bags. Indian women can be fresh and happy!

I see brown women laugh everyday.
At my shows. In bars. In restaurants.

Not the demure kind of “hand covering face” laughs — I’m talking about head thrown back, guffawing kind of laughs.

Brown women love to laugh, they just rarely see anyone telling stories that represent their reality.

Which leads me back to what’s happened on TikTok…

The social media platform is huge in India with 500 million subscribers in the country. When I started posting videos, I knew my American audience well…but had no clue how an international, online audience would respond.

What would India say about a woman daring to tell jokes about her experiences?

I posted videos about married life, religion, husband, kids, and my mother-in-law… even the pandemic!

And they hit a nerve with women who aren’t uninhibited, but want to be.

People who want to talk freely about things I talk about, but can’t.

My new fans call me “refreshing,” “hilariously relatable,” and “honest.”

The truth is — India is hungry for voices like mine.
And that’s why I got more than a million views in three days.

I’m thrilled to be reaching so many people with my perspective, but that’s not to say it hasn’t come with its share of negativity.

That has also been eye-opening and revealed how deep some of these cultural attitudes run.

A commenter chastised me for being “namak haram” (“disloyal”).

Some wondered, “Can women be funny?”

But I’m thrilled in some small part to be changing the narrative around brown women.

We’re not helpless and alone. We’re not sad and subservient.

I am an empowered Indian woman and I’m far from the only one.

My newfound TikTok fans are calling out the sexists, traditionalists, and the ignorant for me in the comments.

It’s been amazing to see, and I’m humbled by it.

We need to laugh.

An online content provider like TikTok helps me bypass the moral police, cross borders, and share a perspective people want to hear right into their phones.

As an Indian American, a comedian, and a woman, I couldn’t be more excited.

Although I heard that TikTok is going to be banned in India soon. So sign up for my newsletter and follow the journey while it lasts.