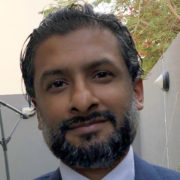 As a Pediatrician What I Learned About Self-deception and Perseveration

I vividly recall, in the early 1980s, as I was turning the dial of our black and white TV, a British-Indian voice came over the airwaves, which caught my attention. I tried my level best to adjust the portable antenna, to get a better glimpse of who this man was. Eventually, I was able to get a clearer picture.  A man was speaking to a massive crowd, primarily to white Americans, enjoying and breaking into laughter at his introduction remarks. It was the first time that I saw a brown person on television, especially in those days, let alone, a brown man speaking of Jesus on TV.

Pastor Ravi Zacharias was a guest speaker for another acclaimed and TV-friendly televangelist Billy Graham. Pastor Ravi spoke for nearly 20 minutes, but I wished him to speak longer, not because I understood what he was saying. I was about 9 years old, and would have needed a dictionary to comprehend his preaching or vocabulary. But I was spellbound by how the white audience was captivated by every word of this Indian man.

As a child of Indian immigrant parents growing up in New York, I  became an instant admirer of Zacharias and Graham. Over the years, my family spent time watching the Rev. Billy Graham Sunday evening specials. Graham became “America’s Pastor” because of his ability to share the Gospel and message of salvation. Then came Zacharias, who complemented Graham’s ministries, which was to validate, extract and break down the Gospel to explain and reflect God’s love for us.

Fast forward to the YouTube era, I have watched nearly all his YouTube uploads. A few things that set Ravi Zacharias apart  from the chorus of other evangelists and apologists is his humility and his compassion on those who came to him with questions. No matter what the question was, Pastor Ravi would embrace the individual and respond with respect, with humility, and with a big smile. One would be hard-pressed to find someone who might have been offended by his style. He would go further to make a connection, by offering his cell number to connect with the folks after the meeting to continue the conversation. He was always aware of his surroundings and remained sensitive and never belittled or condemned the questioner or the questions he received.

Fast forward to November 2019. I learned through a friend that pastor Ravi was holding a business-centered meeting in Abu Dhabi, United Arab Emirates. My wife and I immediately jumped on the opportunity to take part in this event. My wife and I, along with our family friends, arrived early for the event. As we were at the hotel atrium, Pastor Ravi made his way close to where we were. My wife and I introduced ourselves and had the opportunity to chat with him for a few minutes. This chat and meeting with him was a humbling experience. Over the years in my travels, I have had the opportunity to meet great leaders, and celebrities, including the late Kobe Bryant, Derek Jeter, Julius Erving (Dr.J) and Kareem Abdul-Jabbar. However, this moment was very touching for me as Pastor Ravi fed my spiritual needs and was able to address the spiritual mysteries of the universe such as who God is and our purpose in this universe. The sports figures I admired and who are amazing on the courts lived seemingly normal lives outside their arena. But Pastor Ravi’s strength was outside his box, he spoke through this actions.

By most accounts, he practiced what he preached, and loved the Lord with all his heart, mind, strength and soul. The question then is: was he perfect? Absolutely not. But from watching him afar to meeting him in person, I can say he oozes Christ’s love and humility.  The few words  we exchanged will be forever cherished in my memory. A key takeaway from our conversation was, “For me, my retirement would be when I breathe my last breath.”

Each word he shared during that meeting drew my heart closer to God. After all, he was not only the “Guru of Theology” but walked and led the world through his obedience and love of God. It was evident that he had the great wisdom and knowledge of the Word of God, which was certainly an heavenly gift. Well done, servant of God, you fought the good fight, and have finished the race. You have kept the faith! Take rest, you well deserve it.

Peter P. Alexander, currently based in Dallas, Texas, is a self-described New Yorker at heart. He loves sports and traveling, and enjoys learning about cultures and religions.