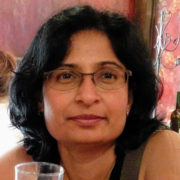 It’s Just Everywhere Already: Recording the Life and Times of the Pandemic

I am a pediatrician and she is about 8, has cerebral palsy, is wheel-chair bound, can stand with support, but does not walk independently. I have known her for over five years now, and for the last two, her mother has been battling with her school to work on her walking.

In the U.S., therapy services are mostly though schools, especially for the poor/ middle class who cannot afford private services. I finally had that hard conversation, “there is little hope of her walking alone. School is giving her as much as they usually do in such situations. Let it go.” She laughs, “just write me that letter.”

I sigh, there is no point, I know when I hit a brick wall. She is as stubborn as they come. So I write…one more in a long line of similar ones that I have done over the years. I suggest, “Please try, may be a stander, a walker, an aide, a gait belt, a few steps around the room with support.” School pushes back, and I have been dodging their weekly phone calls for a year now.

Last week, on the way to lunch, I see them. Mother and child at the front desk, making an appointment to see me. She rushes up and shows me a video on her cell phone. And there she was, taking her first steps alone! I shake my head in disbelief. I am making another appointment, she says. “Oh boy,” I say “what do you want now.” She shakes her head, laughter sparkling in her eyes, “Oh, I have plans,” she says. “I will tell you when I see you.”

I tell families this all the time, I have to give you this news, this may be the worse news you may ever hear, about your child. That is my job, to be factual… but that holding on to hope … that is your job. Hold on to it, fight to make it come true, come back some day to tell me I was wrong and your child did all that I tell you that he/she may never do.

I also know many situations when hope plays you false, and expectations are never met. Some days, however, I think one needs this, this self delusion, this belief that one is capable of more than what the world expects from you. To have dreams.

I was reminded of this , when as usual in my classmates’ WhatsApp, comes the usual morning post of one, who sings. His singing talents are modest, at best. He, however, pours his soul out every day and puts it there, on WhatsApp to face mockery every day. I cant help admiring his perseverance in the face of all that negativity. Takes a special kind I think, to try and try and try again, against all odds.

Well, that noble thought didn’t last very long … later that evening Sanju, my 8-year-old son, showed me his art project. I stared at it for a minute, debating … positive thinking I tell myself yields positive results, so says the inspirational quoter on my Whatsapp group.

On the other hand there is something to be said about toughening up the kid to face the reality of his inadequacies. So, I bite the bullet and give it to him straight. .. You got to be kidding, that is the worst drawing ever. It doesn’t even look like any animal I know.

He, on the other hand, refuses to give up and tries again, and again, now its past 9. Give up already, I tell him, you are never going to get this right. Label the dang thing, at least that way your teacher knows what it is supposed to be.

I sigh.. its going to be another C grade for sure. And I sure am not winning any prize for the Mother of the Year.

Meera Sukumaran is a pediatrician and specializes in the care of children with disabilities. She was born in Kerala, India, and immigrated to  the U.S. with her  husband in the 1990s. They have 2 children and live in the Bay Area of California. Sukumaran likes to write, the genre is what she calls fluff. It is about the small moments in her life, and mostly involves stories about her family or work.