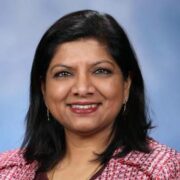 ‘Exterminate All the Brutes’: The HBO Docuseries Sets Out to Unmask White Supremacy But Falls Short

May starts with May Day. However, it wasn’t until I moved to India in my teens that I learned about its significance around the world. In the 19th century, May Day emerged as International Workers’ Day for labor rights. Labor unions are part of why we in the United States have an eight-hour workday. However, we see more and more frequently that workers’ rights are being exploited, or that one needs to work more than 40 hours/week to make enough money to achieve a middle-class lifestyle.

Quality public education is the backbone of the American dream, providing access to opportunity and a path to the middle class. I came to the legislature as a champion for our kids and K-12 schools, but my job has been like playing “whack-a-mole.” Gaps in our policies deny America’s promise of upward mobility to thousands of families — with budgets that don’t reflect our core values or appreciate the dignity of labor. To counter this, my colleagues and I have introduced bills that would restore the right to organize and much needed paid-sick time.

These policies underscore what May Day is all about and help repave a path to the middle class. I am also seeking other ways to fill those gaps: policy in accordance with science and act to reduce the threat of human impact on the climate; stimulate the economy through innovation and invest in EV infrastructure; embrace our diversity, so that people of all cultures and backgrounds feel welcome, at the local, state and national level.

The entire month of May is designated as Asian and Pacific American Heritage Month, to recognize the contributions of Asian Americans to our state and country. The district I represent — and the county I live in — is home to people from around the world, especially immigrants from Asia. The metro Detroit region is home to a wide range of immigrants, with people of Asian and Pacific American background one of the largest groups that make up this diversity.

My hometown, Troy, has been acknowledging its immigrant community in a variety of ways. Over the last two decades, I led a number of initiatives, ranging from our “EthniCity” event in the fall, “Sights and Sounds” programs as part of Troy’s Ethnic Issues Advisory Board, and interfaith dialogue and service projects through the Troy-area Interfaith Group which I co-founded.

This May, I was able to acknowledge Asian Americans in new ways — as a legislator. I introduced HR 102 to declare May as APA Heritage month and held an Asian American-themed toy and book drive for our local children’s hospital. I introduced HR 4835, a bill to help immigrants get their driver’s licenses renewed even if USCIS is taking time to renew their H1B, H4 or similar visa. Along with my colleagues Representatives Abraham Aiyash (D-Hamtramck), Kelly Breen (D-Novi), and Matt Koleszar (D-Plymouth), I introduced a four-bill legislative package that would establish the holidays of Diwali, Eid, Lunar New Year and Vaisakhi as official state holidays in Michigan, recognizing the significance these celebrations hold for Hindus, Jains, Muslims, Sikhs and other Asian Americans to the multicultural, multi-religious American quilt — alongside Yom Kippur, Rosh Hoshanah, and other days already included.

I continued my commitment to bipartisanship and the environment in May, with a bipartisan package of bills, HB 4801-4805, to amend existing law so that EV charging stations are installed in Michigan rest areas off of state and U.S. highways. It would also create the Electric Vehicle Charging Stations Registration Act, to protect consumers and regulate these EV charging stations. On World Bee Day (yes, that’s for real!), my colleague Samantha Steckloff and I introduced legislation to protect pollinators. You’d think these bills to help our environment by enhancing our EV infrastructure or protect bees and butterflies would be easily passed. However, stakeholders — individuals, advocacy groups, corporations — must push for them to progress through the legislative process, or else they’ll just languish.

May ends with Memorial Day to honor those who have fought for the many freedoms we enjoy. On Memorial Day weekend, you’ll find me at the annual event at Troy’s Veteran’s Plaza and also at the 45th anniversary celebration of the Michigan Hmong community. Macomb County Commissioner Mai Xiong, the first Hmong elected in Michigan, organized this year’s event to remember and recognize the many Hmongs who served alongside American soldiers in the Vietnam War. We pay tribute to the memory of those we mourn, and honor those who serve, by engaging our diversity every month, standing in solidarity and preserving the American Dream.

Padma Kuppa is Democratic State Representative for Michigan’s 41st House District and has been just re-elected for a second term. A mother, an engineer from NIT Warangal, and an automotive and IT professional for over 2 decades, and a civic and interfaith leader for years, she is the first Indian immigrant and Hindu in the Michigan state legislature. You can reach her at padmakuppa@house.mi.gov. Learn more at ElectPadmaKuppa.com or Kuppa.housedems.com.

Biden Nominates Jainey Bavishi as Assistant Secretary for Oceans and Atmosphere at Dept. of Commerce