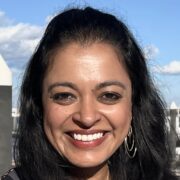 Truth be told, I can’t stop watching “Bridgerton Season 2.” Eyerolll. I know, I get it. Much has been written about how Bridgerton inaccurately depicts Indian culture and completely ignores the harm and devastation caused by colonialism and the mundane plotline. Added to these criticisms, the distinction between North and South India is confusing — the Sharma sisters, Edwina and Kate, call their father “appa” (a Tamil word for father) while Edwina calls her older sister “didi” (a Hindi word for older sister). They speak Hindustani, a mixture of Hindi and Urdu often spoken in the North, but they are South Indian in appearance and on the show. (Side note: It’s baffling to me that while these shows spend thousands of dollars on elegant wardrobes and stage sets, they can’t do a simple desk research to get these aspects of another’s culture correct.)

All of this aside, I rejoiced at seeing somebody who looked like me on screen. It was one of the first times that I’ve seen a dark-skinned, South Indian actress play the lead role and be the object of affection of a White, leading man. This all sounds warped especially in this day in age where you see South Asian representation everywhere and being coveted by a White person no longer carries the same symbolism nor should it. However, I can’t recall a time when a dark-skinned, South Indian actress is the object of desire by a mainstream man not out of some weird, exotic fetish but simply for being her. Kate Sharma (played by Simone Ashley Pillai) is displayed in all her beauty and radiance with complex depth and emotion. She is desired not just for her looks, but for her personality, wit and grace.

Devouring episode after episode of “Bridgerton,” I wonder what this depiction would have done for me had it been available in my childhood. Growing up in the 80s and 90s, I was surrounded by the rom coms like “Sixteen Candles,” “Dirty Dancing,” “Princess Bride,” “Pretty in Pink,” “Sleepless in Seattle,” “My Best Friend’s Wedding” and “Never Been Kissed.” The list goes on but the connecting theme is that of a White leading lady being pursued or wanted by a White leading man. I used to dream about being suddenly noticed and swept off my feet by Michael Schoeffling (The Jake Ryan of Samantha’s dreams). But then I would look in the mirror and realize that there was no way it was possible for an Indian American girl like me.

During this time I also started watching Indian movies, mostly Hindi movies, as those were the ones coming our way. I remember visiting India after “1942: A Love Story” came out. The songs, the dancing, the love story all sucked me in — I dreamt about being Manisha Koirala dancing in the rain and singing Rim Jhim Rim Jhim and of catching Jackie Shroff’s fancy. What is fascinating is that despite being Nepalese, Koirala depicted what was seen as beautiful for that time: fitting a certain mold of beauty of being fair-skinned. All the South Indian actresses that made it in Bollywood up until this point were fair-skinned (and gorgeous)- Aishwarya Rai, Sridevi and Rekha to name a few. Again, the message was clear from Hollywood to Bollywood: beauty was not me.

All these castings left girls like me out of the equation — beauty didn’t include a dark-skinned South-Indian girl with an American accent and hairy arms and legs. And that limited what I could see for my future. It affected my confidence profoundly, who I could see myself with and what I desired. We hear people say this all the time, that representation matters. I can honestly say that it does. It matters for those little girls and boys who are yearning to see people like themselves on screens, in positions of power, and as role models in society. It matters to be able to see what is possible and not be limited by others. It matters who we see as beautiful and worthy of affection. Representation matters.

As We Celebrate Martin Luther King Jr. Day This Month, Remember the Indian Roots of His Nonviolence Movement

I’m grateful that my daughter can now see that beauty includes girls like her and that the only thing limiting her dreams is her own imagination. As a young girl, I would have given anything to see Kate and Edwina Sharma on-screen as leading ladies catching the fancy of a handsome Viscount. Maybe I too would have believed in my beauty and more importantly, myself, as well.

Sucharita Varanasi is passionate about helping people and working towards systemic change. She has led her company’s pro bono program, served as President of the national SABA Foundation, the charitable arm of the South Asian Bar Association, and currently is representing an Afghan in an asylum case. Sucharita is the Head of Public Policy at MassMutual, a Fortune 100 company based in Springfield, MA and lives in Cambridge, MA with her husband and two children.