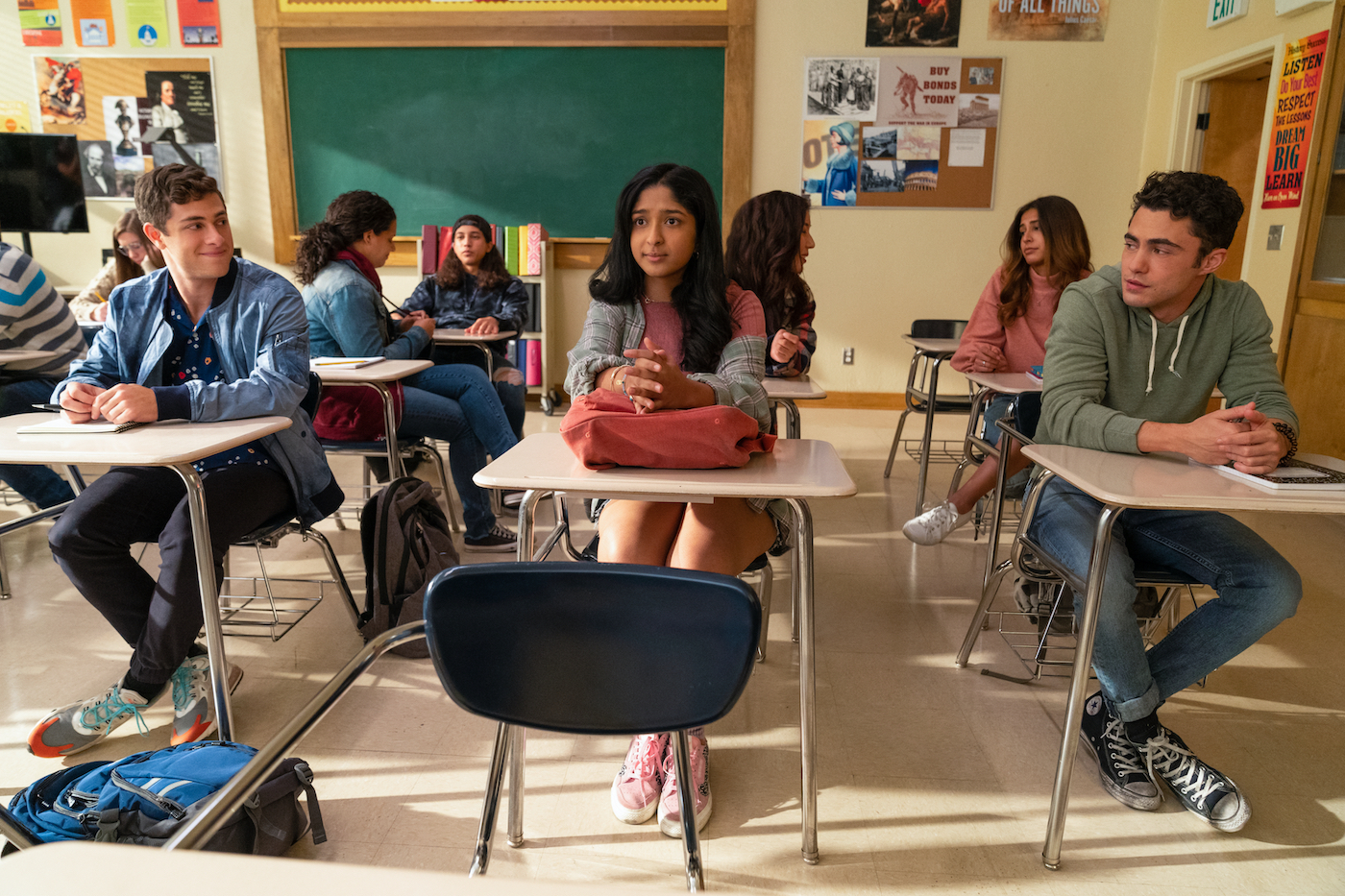 Season 2 of Mindy Kaling’s coming-of-age Netflix rom-com promptly picks up where Season 1 left off – on the beautiful Malibu shores. We see Devi (Maitreyi Ramakrishnan), who reconciled with her mom Nalini (Poorna Jagannathan), spread her dad’s ashes into the sea. His favorite song “Beautiful Day” by U2 amped up the moment as did John McEnroe’s commentary, providing the mood as Devi shares a passionate kiss with her nemesis-turned-crush Ben Gross.

But the kiss is short-lived thanks to her mother, who declares rather dramatically, “When I die, you’ll have sex on top of my grave. I hope it’s a closed casket,” setting the tone for the season. At the same time, Devi also discovers that class hottie Paxton Hall-Yoshida (Darren Barnet) is also interested in her, leaving her to wonder if she can get away with having two boyfriends at the same time. Throw in another cool Indian girl Aneesa (Megan Suri) into the mix, and you have the recipe for a love triangle that is Season 2. We see Devi making some incredibly bad decisions – Devi style — such as outing a secret from Aneesa’s past and then making a ridiculously grandiose apology gesture, making matters worse.

“Never Have I Ever” Season 2 is bigger, better, and bolder, the jokes funnier and the attitude…attitudier (yes, yes, I know that’s not a word, but nothing else did the sentiment justice). It is just as delightful, funny, and relatable as Season 1 thanks, in large part, to its cast and crisp writing by creators Kaling and Lang Fisher. It continues to bring that perfect blend of heart and humor with a little sting. It’s hard to capture the magic of that first season (which was not only a ton of fun but told stories about teenage girls from a unique perspective), but Season 2 has something special all its own.

While last season was primarily focused on Devi’s grief over her father’s death and how she subsumed that in her attempt to get on Paxton’s radar, now Devi discovers that in trying to ignore her trauma, she puts herself out there enough to gain a smidge of popularity — not enough for people to actually look up when she enters a room, but enough that both Paxton and Ben see her as a viable dating option. Such contrasting motivations and outcomes are what make this season so delightful. Devi’s problems are not solved by a long shot. She’s just able to utilize them as a conduit for other things which, in turn, create new problems and leaves the doors wide open for a gripping season 3.

Ramakrishnan and Jagannathan still remain the stars of Season 2. Ramakrishnan has masterful control over not just her emotions but her facial expressions, whether that’s being surprised at Paxton’s attraction to her or her lingering worries that her mom believes she’s crazy. Jagannathan is just as fantastic and her character is more introspective in this edition. Nalini starts to interact more with rival dermatologist Chris Jackson (played by Common), and over their innocent flirting, we start to see her as less of Devi’s mom and more as her own person. A welcome change. And the way Jagannathan emotes with her eyes as she has to close the door on newfound love puts on a poker face when being fed South Indian thalis by a doting mother-in-law, and switches from concerned to stern momma that you realize she deserves a spin-off, all of her own.

But some of the other characters do not fare as well. Take Kamala (Richa Moorjani) for instance, Devi’s hot and brainiac cousin from India. It is certainly novel to place her in a stem cell research lab and battle gender discrimination at the workplace (as Devi says, “People don’t know you’re this smart because you’re so hot”). But that part of the story, along with the arrival of her chauvinistic fiancé never takes off and remains a dispensable segue.

Devi’BFFs Elena Wong (Ramona Young) and Fabiola Torres (Lee Rodriguez) are given minor stories of their own but both pale in comparison to Devi’s. Young has impeccable comic timing but her relationship with out- or-work child star Malcolm Stone (Tyler Alvarez) is never truly explored. The same holds true to an extent for Rodriguez’s character. The idea of a queer girl feeling lost in the lesbian community seems a good conversation starter, but it is not allotted enough room to thrive.

Two Views of Time to Contemplate in 2022: Netflix’s ‘Don’t Look Up’ and ‘Decoupled’

While it seemed commendable that Season 1 was so fresh in terms of its dialogues given that it is loosely based on Kaling’s life in the 1980s, the ‘wokeness’ often gets too overbearing in Season 2, making us want to just yell…stop already.

Despite this, there are some dialogue gems, which seem new and fresh off the taw for me. For example, when Devi’s Black principal tells her, “If you play the race card on me, I’d Reverse, Draw 4, and UNO you,” and the reference to a Ferrero Rocher pyramid as the “Rolex of confection gift boxes for Indians,” are simply brilliant.

And as long as Devi is the pivot, “Never Have I Ever” Season 2 remains thoroughly engaging and occasionally exciting.