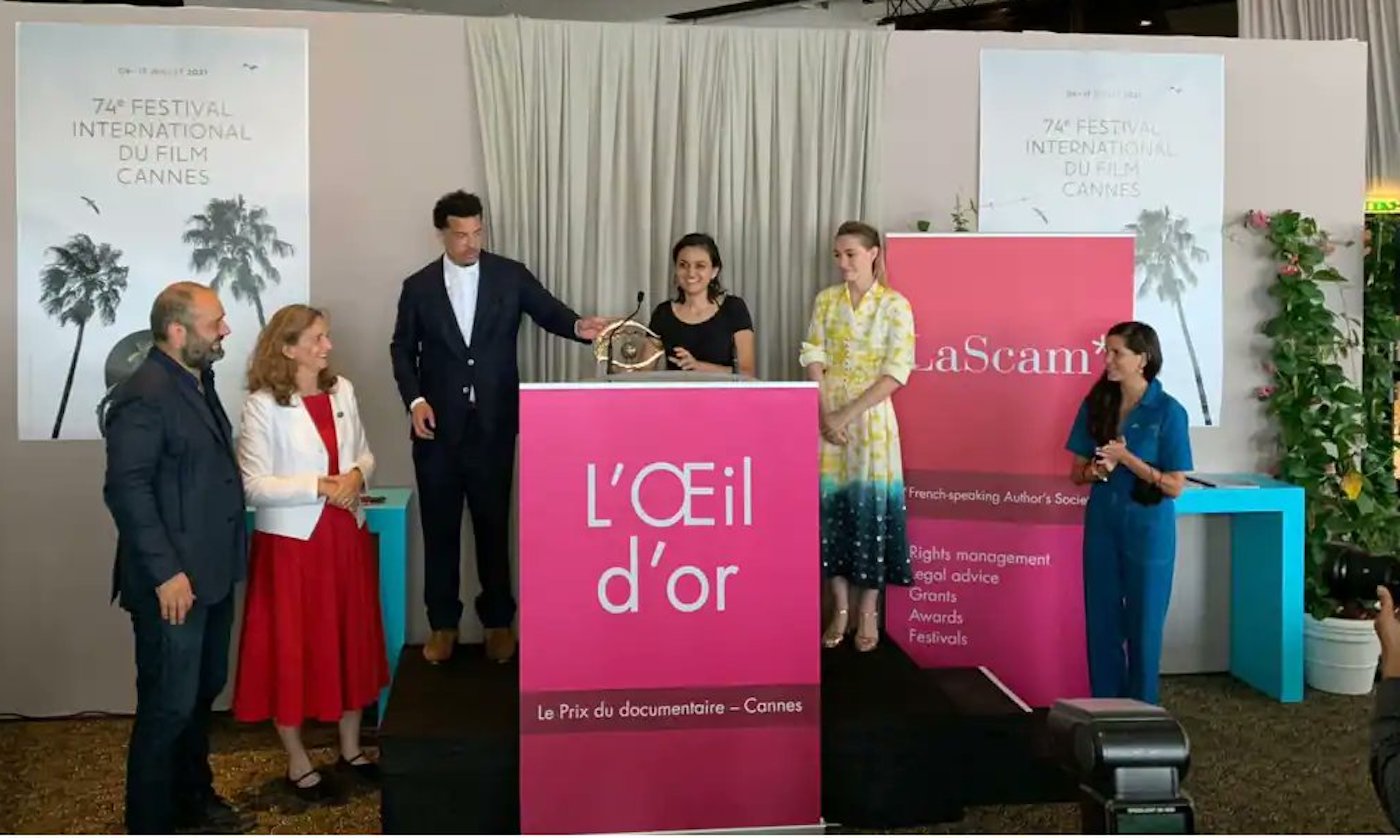 Mumbai-based filmmaker Payal Kapadia has won the L’Oeil d’Or: Le Prix du documentaire, an award for best documentary, at the Cannes Film Festival for “A Night of Knowing Nothing.” The film, which is based on student protests, won on July 17, in a competitive field of 28 documentaries screened throughout the festival’s many divisions. “A Night of Knowing Nothing” was an entry at the Cannes’ Directors’ Fortnight, which runs concurrently with the festival.

The plot of Kapadia’s documentary revolves around an FTII student, named L, who falls in love with K but is separated, as K has to return to his village home. “Through these letters, we get a glimpse into the drastic changes taking place around her (the woman). Merging reality with fiction, dreams, memories, fantasies and anxieties, an amorphous narrative unfolds,” noted the official website of Director’s Fortnight.

“I’m really honored to receive this prize as there have been wonderful filmmakers who have gotten it in the past. Our film is quite experimental, so we were a bit surprised too,” Kapadia told The Sunday Express after receiving the award.

When Kapadia was a student at FTII in 2015, she was charged with disciplinary action after she boycotted classes and spearheaded a four-month-long protest against the appointment of television-actor-turned-politician Gajendra Chauhan as the institute’s chairman. As per news reports, FTII had also cut her scholarship following this incident. According to a report in The Print, an FIR was also registered against her for allegedly “holding then director Prashant Pathrabe captive” in his office as students challenged his decision to go ahead with the assessment of incomplete projects of students from the 2008 batch. Later, The Hindustan Times reported that the institute decided to support Kapadia.

Talking about her choices of themes in her films, Kapadia told the Open The Magazine that she is at an age where apart from her profession “things like marriage, love and commitment are also in one’s face”. “I use these characters to answer some of those questions.”

Kapadia is currently working on “All We Imagine as Light,” which is her first feature film. She developed the film at the PJLF Three Rivers Residency in Rome

“A Night of Knowing Nothing” competed against Andrea Arnold’s “Cow,” Marco Bellocchio’s “Marx Can Wait,” Todd Haynes’ “The Velvet Underground” and Rahul Jain’s “Invisible Demons,” which had its world premiere at Cannes in the cinema for the climate special section.

As per the Cannes website, “Invisible Demons” offers a deeply experiential and new perspective on its subject: the clear and present climate reality. “Jain engages the senses by directly stimulating our desire to live in a world with equitable access to clean air and water,” says the synopsis of the documentary. “Is it possible to imagine this future in Delhi, in India, or anywhere in the modern world?” Variety reported that Participant and French sales agent MK2 Films have teamed up to jointly represent worldwide rights to the documentary.

Jain is currently prepping “Falling Star,” a limited fiction series, which is likely to consist of six or seven one-hour episodes, via his Jann Pictures. It will see him reunite with Heino Deckert’s Ma.Ja.De. FilmProduktion, who co-produced “Invisible Demons.” Jain told Variety that “the series was born out of Jain’s ongoing obsession with the concept of Anthropocene, a reference to the current geological age, during which human activity has been the dominant influence on climate and the environment. Jain’s specific target is the smartphone.”

While technically not a part of the film festival Suman Sen’s debut feature “Eka,” was selected for La Fabrique Cinéma de l’Institutfrançais 2021, a program tailored for young filmmakers across emerging countries to network with distributors and agents across the world during the festival. The socio-political drama set in Kolkata, currently under development, centers on the issue of the spirit of resistance of the common man.

Also screened at the Cannes Court Métrage was a short film, “Divide-Time to Breathe,” co-produced by New Jersey-based filmmaker Vijaykumar Mirchandani. With the Black Lives Matter movement in the background, the short film, written and directed by Anthony Paulino, tells the story of an African American teenager, Gerald, who believes in taking a stance against the injustice to his people, and rebels against his father, Jerome, a retired police officer, who does not agree with the methods implemented by the BLM supporters.

Adding glamour to the festival were Indian beauties who scorched the red carpet with their exclusive and out-of-the-box outfits.

Indian influencer Diipa Khosla made a mark on the red carpet in a stunning black and yellow off-shoulder gown, and breast pumps to boot. The new mother, who welcomed her daughter Dua in April, took to Instagram to share why she chose to pose in the look. “I chose to shed light on this topic due to the countless messages or comments from people who’ve questioned and judged my decisions as a mother – An issue I’m certain that most women endure on social media.” Noting that mothers are usually subject to unwarranted scrutiny, the new mom wrote: “There is no rule book to motherhood, it takes experience and learning to understand the ins and outs of what is appropriate for YOU as a mother and not anybody else. Being a new mom holds enough self-judgment as there is constant worry if your actions are right.”

Her other red carpet outfits included a traditional, printed lehenga, inspired by historical paintings by designer duo Falguni and Shane Peacock, and a yellow gown by Studio NK.

Also rocking the red carpet was fashion blogger Masoom Minawala Mehta in her shimmery Manish Malhotra sari with trailing cape sleeves that followed her on either side. She completed her dazzling look with a pair of studs and ear cuffs from Boucheron while opting for minimal nude makeup.

National Award-winning Marathi actress Usha Jadhav attended the festival with her partner and director Alejandro Cortés, with whom she is working in a Spanish film “Nueva Normalidad.” The National Award winning actress wore a greyish gown featuring a long plunging line from Esther Noriega’s Sanger collection. Sharing the picture, Jadhav tweeted “#Cannes2021#CannesFilmFestival#Cannes74 with @cortescalahorra the dress is from #EstherNoriega#SangerCollection.”

After walking a red carpet, the actor posed with the director on the stairs when they were all set to watch Leos Carax’s “Annette” and Mahamat-Saleh Haroun’s“Lingui.” Cortés retweeted the images and wrote: “Opening nights at the Palais des Festivals. After passing the red carpet, inside you can breathe for a few seconds. The big-screen Lumière awaits with the Official Selection: Annette, Lingui.”

In 2012, Jadhav won the prestigious National Award for Best Actress for the Marathi film “Dhag.” In 2019, she received the IFFI Best Actor Award (Female) at the 50th International Film Festival of India for her work in “Mai Ghat: Crime No 103/2015.”