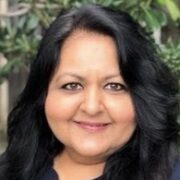 “Madame Speaker, Madame Vice President…No president has ever said those words from this podium, and it’s about time,” said President Joe Biden at his first address to a joint session of Congress. I was watching this historic moment with my 87-year-old mother and my 22-year-old daughter. The three of us burst into cheer, tears and applause for the President’s most accurate wording of the moment, “it’s about time!”

As I sat there watching the rest of the speech and taking in every bit of seeing Vice President Harris and Speaker Pelosi at the dais, I kept saying to myself, “it is about time!” This powerful moment was brought to you by women across the country, whose tireless efforts and sacrifices over many years, got us to this point.

That story stuck with me as I started to work on political campaigns 30 years ago, and it gave me motivation to always be involved in the political process to make the change that I wanted to see — a woman as president.

In 2007, I still remember the goose bumps I had when George W. Bush said he had the honor to be the first U.S. President to begin his State of the Union address with, “Madam Speaker.” It was a huge moment for women and girls to see U.S. House Speaker Nancy Pelosi in the third-highest position in the country. And it gave us all hope that one day, a woman would be the one giving the speech.

In 2016, when Hillary Clinton became the first female presidential nominee of a major U.S. political party, hope finally started to set in that we were going to elect our first female president. Many of us who worked tirelessly for decades, could hear that glass ceiling starting to crack. But then the loss was devastating. And women responded in full force. That loss fueled another important moment in U.S. history when in 2019, the most number of women were sworn in the U.S. 116th Congress — and that number continues to grow.

We all know and agree the historic election of Vice President Kamala Harris truly changed the game. A woman of color, who didn’t go to an Ivy League school, didn’t have millionaire parents, and who just worked hard all her life, elected on her own merit to the second-highest position in the land:  That is representation on so many levels, it’s mind-blowing. The glass ceiling that seemed more like a concrete ceiling for women of color, had finally cracked.

I glanced over to my daughter, who is half Black and Indian, who was watching last night’s presidential address with such intent, as I’m sure many young women and men were, the impact was clear and the future seems very bright.

Before writing this, I looked up women leaders around the world. The United States is glaringly missing from that list. After last night’s inspiring and powerful viewing of the two top women in our country, I am certain that it will be just a matter of time when all ceilings, glass or concrete, will be cracked, smashed and broken — and America will never look back — and I am here for it.

Shikha Hamilton is a national grassroots organizer for a national gun violence prevention organization, an attorney and has worked on political campaigns for the past 30 years. She received National Congressional Record Recognition for her work on gun violence prevention. Shikha is a proud, long-time supporter of Kamala Harris since her first run for California Attorney General, then U.S, Senate, then President.  She also served on the National Finance Committees for several presidential campaigns including, Kamala Harris for President and Joe Biden for President.