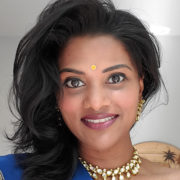 I’m Half Indian and Half Black, Yet I’m Made to Feel Only Black, Within My Own Family

As South Asians, what brings us to America? It is the simple fact that it is truly, the “land of the opportunities.” Nowhere else can a little girl from a rural village in Karnataka, India dream of becoming a United States Army officer and doctor. It is no wonder that people from every part of the world flock to the United States to build a better life. My story is that of achieving the American dream.

Forty-two years ago, in India, my mother was faced with a life or death decision when she was pregnant with her third child. Due to prior illness and a lack of healthcare infrastructure in place, she fought to bring me into this world. But died hours later. Her younger sister, who barely knew my father, saw three motherless girls. That inspired her to marry my father and sacrifice having her own children. She is the only amma I know. My father had completed his Ph.D. in Chemistry in Mysore, Karnataka, and had an opportunity to come to the U.S. for a temporary position in Norfolk, Virginia. My father and amma, brought my sister who was two years older, to the United States.

My immediate family faced first-generation immigrant struggles such as employment opportunities, housing placement, transportation issues, cultural differences, and, overall, prejudice. I, on the other hand, grew up in my father’s remote village till the age of five. I then moved to the city of Mysore with my mother’s family for a year before coming to the U.S. at the age of six. Before I arrived in the U.S., I pictured a place so wealthy that roads would be paved with gold. However, growing up here, I observed a different scenario. Starting work, my parents were isolated and alienated from anything familiar to India. As years passed, my family entered a low to middle income family bracket. We were fortunate to have food to eat, clean clothes to wear and a roof to protect our heads.

However, as a child, I recall questioning my parents over why we had to live differently from my peers and the way they grew up. Wearing hand-me-downs was a constant in my youth.  Frequent visits to the Salvation Army were not remiss of me bending my head, in constant fear and shame, that classmates would catch me with a bag full of clothes for 50 cents. Forget Sunday brunch at IHOP. We never went out to eat. And I thought that was the norm? As an adult, looking back on her childhood, I realized that we could not afford to dine out. Let’s just say, back then, snacking on McDonald’s French fries twice a year was a big treat.

Although these were some of many challenges facing our family and other South Asian families hailing from a similar background,  I cherish our times as a family. Listening to hours of storytelling over homemade meals is where I learned the core values of my Indian cultural roots, including the importance of knowing my mother tongue, hard work, and helping others less fortunate. Along with lessons learned, I fondly remember long drives taken to visit family members and relish those quirky moments like sneaking rice cookers into small hotel rooms as a way to stay on budget. These fruitful experiences taught me the value of money and hard work.

Speaking of learned values, I learned many from my father, who, as a child, I admired to the highest degree. For me, he was my God who I worshipped.  Which is why, at the age of 10, my world crashed. My father was only 43 years old when he underwent a quadruple coronary artery bypass graft surgery. For the next 30 years, he was able to lead an active and fulfilling life right until he died on May 8, 2019.  Learning about my biological mother’s passing and witnessing my father’s medical ailments, inspired me to become a doctor. I wanted to help others in the same way that my father was helped.  Quality medical care found with therapeutic intervention prolonged his life. I knew my calling.

Though I hail from a family of farmers who didn’t receive any schooling, except for my grandfather and father, the importance of education was heavily ingrained in me. My heritage, my humble background, and my traditional father pushed me to hold exceedingly high expectations about what constitutes success. On many occasions, expectations from my father were almost impossible to meet. For most of my childhood, we lived in the rural Midwest. I grew up in a small town, surrounded by cornfields, with very few people of color, let alone Indians. I turned to sports to fit in with my peers as I seemed to excel in it. I immersed myself in long-distance running, tennis and later dance.

Throughout the years, I endured many emotional ups and downs in my struggle to validate myself to my father. I never felt good enough in his or my eyes. These inner roadblocks led to many self-esteem issues that I needed to overcome. This was further complicated by the common Indian misconception that, lighter skinned children can do no wrong.  I was of a darker, duskier, complexion. I channeled these complexion demons, my isolation and emotionally turbulent moments into running. Sports were my saving grace.

With my desire to go to medical school coupled with limited financial resources, I opted to join the U.S. Army. Through the Army Health Professional Scholarship Program, I received a monthly stipend, coverage for the cost of books/ supplies, and complete tuition payment for two years. As part of the agreement, I enrolled in an Army residency training with Walter Reed Army Medical Center (WRAMC) in Washington, D.C. This was a great opportunity for me to serve this great country that my family called home in addition to easing some of the cost burdens associated with education.

The Richness of Earthly Realm: What is the Real Meaning of Wealth That We Seek When Celebrating Diwali?

I recall wearing my Army Combat Uniform and having mixed emotions as I walked down the hallway of the hospital. I felt pride that I was representing my country, but also fear since I had never met an Indian female officer before. Initially I felt isolated and different, but this was not an emotion that was foreign to me and the embracing culture of the nation’s military helped me get over my fears.  Subsequently, a few years after I finished my medical school at Pikeville College School of Osteopathic Medicine, I was diagnosed with Juvenile Myoclonic Epilepsy. This diagnosis caused my residency to come to a screeching halt.

Over the years, I have worked in multiple leadership positions including serving as an assistant medical director, being one of two physicians in the Quality Improvement and Patient Safety Committee at WRAMC to later serving as the medical director of the Army Medical Management Center at Kimbrough Ambulatory Care Center in Fort Meade, Maryland. After being honorably discharged from the U.S. Army in 2013, I finished my civilian residency and took up a job in the D.C. area to be close to my family.

Through benefits from the Post 9/11 GI Bill, I obtained an Executive Master’s in Health Administration from The George Washington University in 2017. Over the years, through sheer grit and hard work I have accomplished much and I have been voted as a Washingtonian Top Doctor both in 2018 and 2019 back to back.

The future is yet to be determined.  However, I do plan to continue my clinical duties and expand to philanthropic initiatives that inspire me, such as improving worldwide women’s healthcare and education. As you have read, my story is an example that the American dream is real, tangible, and achievable.  It is the land of opportunities, after all.

Once we internalize this, we must seize all given, and ungiven opportunities and create our own unique path. Not unlike the South Asian Americans who have come before us.

Dr. Pallavi Gowda, an U.S. Army veteran, is an osteopathic internal medicine physician who lives in Rockville, Maryland. She was stationed in Fort Meade, MD at Kimbrough Ambulatory Care Center, where she served as a Chief Medical Officer in Force Health Protection. She received numerous awards such as the National Defense Service Medal, Global War on Terrorism Service Medal, and the Army Superior Unit Award. Now she has her own private practice and divides her free time doing community service projects as well as with her two children.