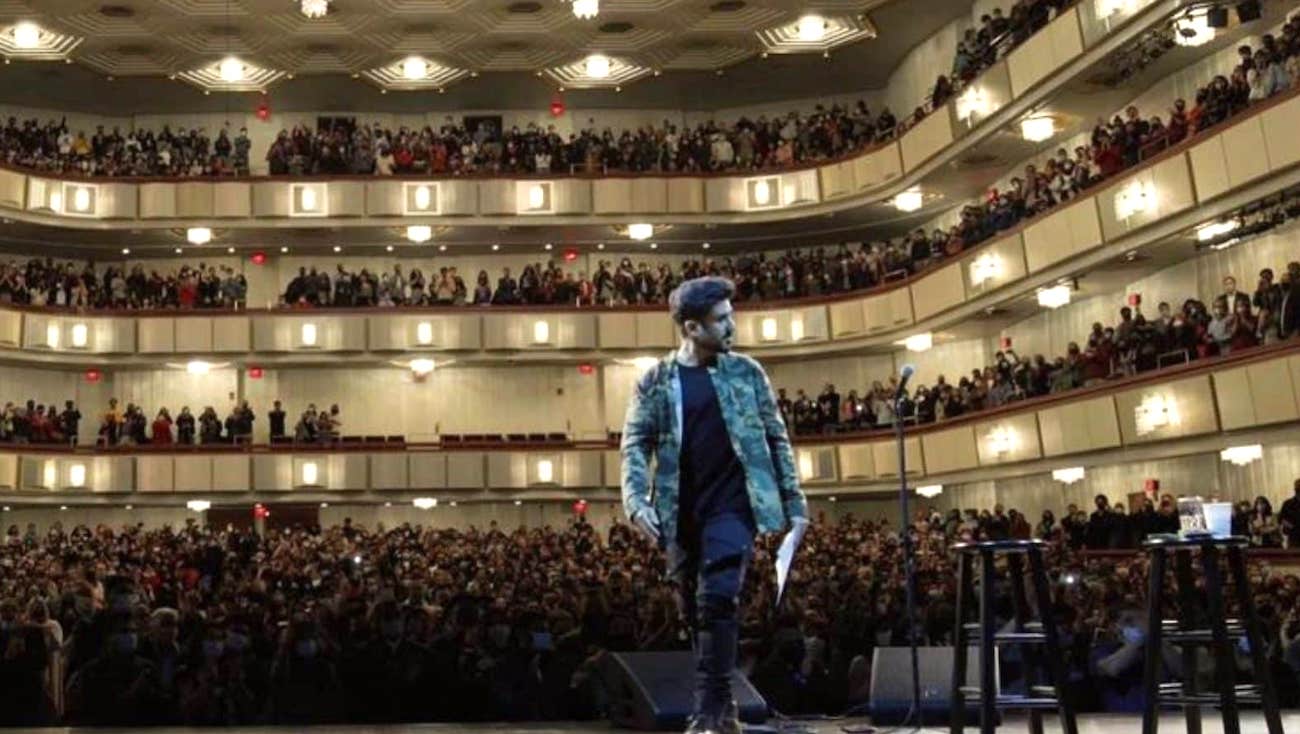 Indian comedian Vir Das has stirred the hornet’s nest with his controversial monologue sparking a debate online. The now-viral routine — “Two Indias” — delivered by Das at the end of his Nov. 12 performance at the Kennedy Center in Washington, D.C., has outraged some in the country, prompting complaints to police and backlash on Twitter. Others have shown support for the comic, who received a standing ovation at the D.C. performance. Das uploaded the seven-minute video online this week and it quickly went viral, creating a Twitter storm.

In the video, the 42-year-old stand-up comedian acknowledges that many people will not find the video funny, while others would see “that there is a gigantic joke” which isn’t funny. “I leave you tonight, and I go back to India,” he said. “Which India will I go back to? Both of them. Which India am I proud of? One of them.”

Finally, he asked members of the audience to cheer for the India that they believed in, and “make some noise for the India you want to live in,” and walked off stage to a standing ovation.

Two complaints have been filed against Das in India so far. One was lodged with the Mumbai Police by High Court lawyer Ashutosh Dubey, who serves as the legal advisor of BJP-Maharashtra Palghar District. The other was in Delhi, by Aditya Jha, a Delhi spokesman for the BJP. Jha, who is accusing Das of making “derogatory statements against women and India,” told BBC that since Das’ comments were made in the U.S., he is maligning India’s image intentionally. “I want police to conduct an investigation.”

Das defended his performance in a social media post that warned critics to not get “fooled” by edited snippets. He said his show was about “two very separate India’s that do different things. Like any nation has light and dark, good and evil within it. None of this is a secret,” he wrote.“It ends in a gigantic patriotic round of applause for a country we all love, believe in, and are proud of,” he said. “I ask of you, the same thing I asked that audience…to focus on the light, remember our greatness, and spread the love.”

Das’ critics called him a “scum” and called him out for his “deplorable” comments on India.

“Highly deplorable of @thevirdas in spreading confusion about India in a foreign land,” tweeted BJP leader P. Muralidgar Rao. “With his so-called satire through which he is mocking great Indian civilization, he is aiding anti-India forces.”

Some criticized Das and his supporters for calling his monologue a comedy, while others objected to the way he generalized and labeled India.

Entrepreneur and author Vin Nair tweeted: “I finally had the misfortune of watching the #VirDas video – running down your country internationally must count for the lowest self-esteem possible and an impossible craving for acceptance. Utterly shameful and those supporting him in the name of free speech are scum.”

Similarly, a Twitter user named Rosy wrote: “This is Comedy?? Vir Das at Kennedy Center USA: “I come from an India where we worship Women in the morning & G@ng г@ре them at night” He might possibly be doing that BUT What gives him the right to generalize & label India like that??”

However several opposition politicians stood up for the comedian.

Writing on Twitter, Shashi Tharoor, a member of the Congress Party called Das “a stand-up comedian who knows the real meaning of the term ‘stand up’ is not physical but moral.”

Congress leader Digvijaya Singh called Das’ monologue “an excellent satire.” He tweeted: “To add to his list I would like to add. Two Indias One who Robs and other Which gets Robbed.”

“Thank you to @thevirdas for speaking truth about Two Indias,” tweeted Mohua Moitra, Lok Sabha MP from Krishnanagar, West Bengal. “Reactions also from 2 Indias- one having a laugh & other filing complaints with police!”

“I live in a country where parents gut themselves to give the best education to their children but elect an illiterate criminal to run it,” tweeted actress and activist Mona Ambegaonkar.

Joining Ambegaonkar was journalist Rohini Singh. “I come from an India where greater accountability is demanded from a comedian and none from an elected minister whose son mowed down protestors,” she tweeted.

Some drew comparisons between actress Kangana Ranaut and Das, who recently created a controversy with her statements on India’s freedom. She took to her Instagram and slammed Das’ monologue, and asked for strict action to be taken against him. She also shared an old post by Das and called him creepy. “When you generalize all Indian men as gang-rapists it gives rise and encouragement to racism and bullying against Indians all over the world,” she wrote on Instagram. “Such creative work targeting an entire race is soft terrorism… strict actions must be taken against such criminals @virdas.”

“I come from an #India where…#KanganaRanaut calls our freedom ‘bheek’, mocks Gandhi & says ‘ahimsa’ will get you ‘bheek’ & @BJP4India Govt keeps awarding her state honors,” tweeted user Micky Gupta. “But #VirDas jokes about the dichotomy of India & we want to book him under anti-terror laws.”

SEBI Research Analyst Ashok Jain also shared his two Indias. “One that crabs around and revels in #virdas like rhetoric. And the other that is genuinely trying to make a difference. My view only. Go find yours.”

And so did author and satirist Shefali Vaidya. “I come from #TwoIndias too, an India where people prostrate in front of life-giving rivers and call them mothers, and the other India where woke misogynist turds like @thevirdas live, where they look at a nursing mother and think, ‘boobs’!”

A user named Darshan Mondkar complimented Das for touching “beautifully upon the two Indias that we have,” and pointed out to a third India that he missed out on. In a series of tweets, he shared what third India is. “The third India which toils daily to get their meals and goes to bed on a pavement dreaming of waking up in an Antilia someday only to be mowed down by a privileged drunk.”

Das got support from several actors as well.

Actress Taapsee Pannu took to Instagram stories and shared Das’s video. “Because I come from India which not only swells with pride and happiness to see a fellow countryman reach that respectable stage but I also come from an India who believes we shall get through this time too,” she wrote.

Reacting to a tweet criticizing Das for his performance Richa Chadha tweeted: “Gentle reminder that the pursuit of azaadi must also free us from all-season RWA presidents masquerading as politicos. The ‘national image’ argument is irrelevant, when brutal crimes make global headlines and the country has fallen several ranks in ALL indices.”

Pooja Bhatt replied to Mehta’s tweet. “You said it Hansal,” she wrote. “I was not amused as much as I was moved more by the audience that cheered with their heart for the India that chooses love over hate & shows great dignity & decency in the face of suffering & despair. One that can unashamedly cry for itself yet laugh at itself.”

“I felt I was in that room. I really did. Thank you for your art @thevirdas,” tweeted actor Nakul Mehta.

Also taking to Twitter was actress Shruti Seth, who shared the video. “I’m so proud to call myself your friend @thevirdas,” she tweeted. “This is bloody brilliant.”

A tweet by digital marketer Paushali Sahu summed it up well on behalf of Das’ supporters. “If you are offended by Vir Das’s Two Indias, you know which India you belong to.”