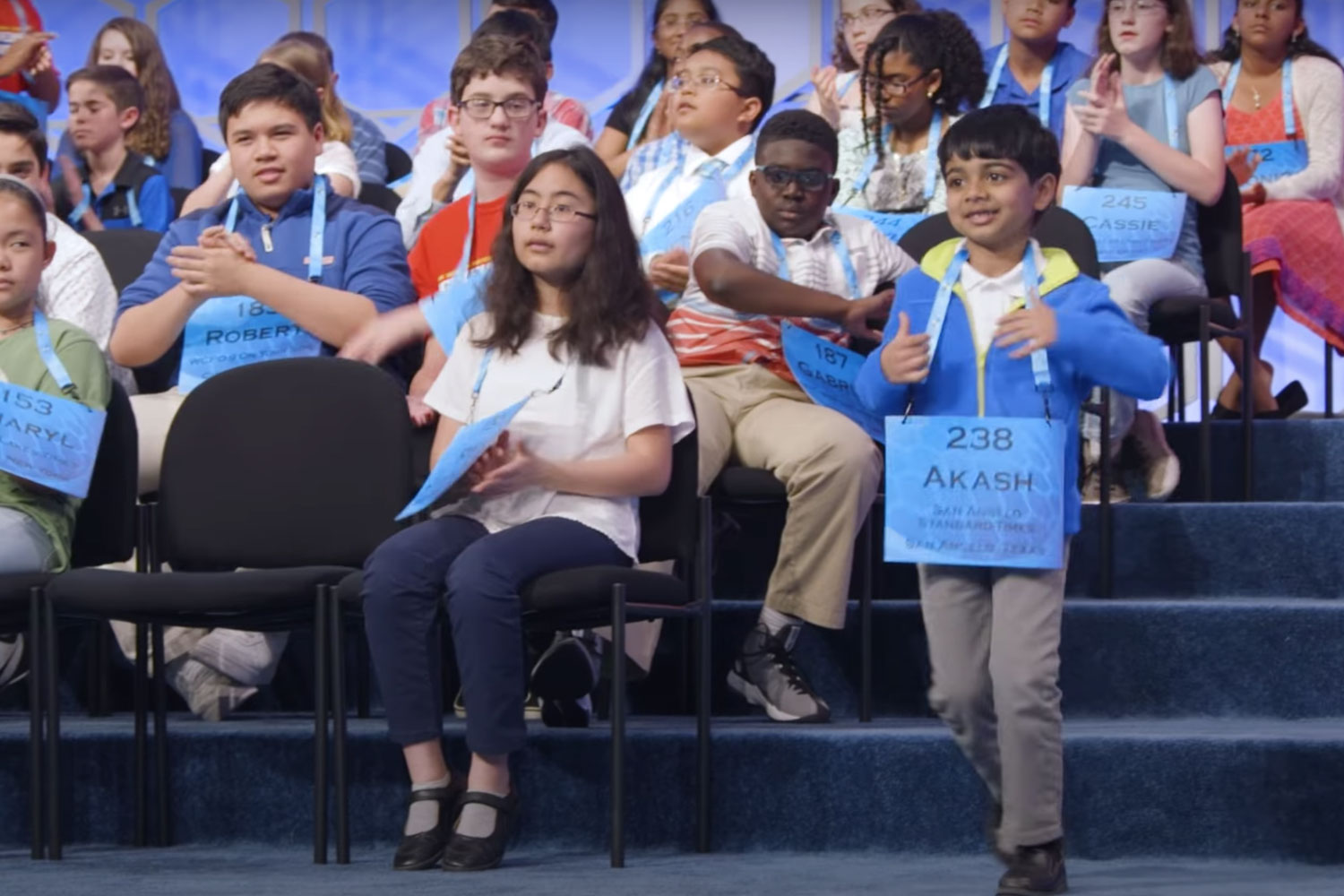 For over a decade, Indian American kids have been ruling the national spelling bee circuit and claiming the championship trophy. In fact, Scripps National Spelling Bee data shows that 27 of the last 35 winners were of Indian origin.

Last year, eight kids — seven of them Indian Americans — were declared co-winners at the coveted bee in Washington, D.C.

Rishik Gandhasri, 13, of California; Erin Howard, 14, of Alabama; Saketh Sundar, 13, of Maryland; Shruthika Padhy, 13, of New Jersey; Sohum Sukhatankar, 13, of Texas; Abhijay Kodali, 12, of Texas; Christopher Serrao, 13, of New Jersey and Rohan Raja, 13, of Texas — closed the bee with 47 correct spellings in a row in a final that went into 20 rounds. Each speller displayed his or her command over words and etymologies.

This was the first time that more than two co-champions were named in the national bee.

Rega’s 90-minute documentary not only highlights these and other accomplishments, it tries to look into the reasons behind the phenomenon. Closely following the four families, he examines various factors which could contribute to the expertise and success Indian American kids have been displaying at the national spelling bees. Is it genetics, is it the “tiger parent” syndrome, or a combination of intelligence, dedication and hard work?

Viewers are first introduced to Akash Vukoti, a precocious and highly-animated then 7-year-old from San Angelo, Texas. Akash has been spelling since he was two. He was inducted into the American Mensa when he was three. He made his first appearance at the National Spelling Bee when he was 6-years-old. Since his first bee appearance, Akash, now 11, has gained a lot of fame, and has appeared in “Little Big Shots” hosted by Steve Harvey as well as on “Dancing With the Stars: Juniors.”

Then we meet Shourav Dasari, then 14, of Woodlands, Texas. His friends describe him as being “like Michael Jordan … consistently the best speller in the school, in the state and probably the nation.” Known to be one of the fastest spellers, Shourav’s secret weapon for his talent is his family’s involvement in his bee journey, and a ‘secret’ database they’ve perfected over the years.

2017 was Shourav’s last attempt at the bee. However, the then eight grader faltered at “Struldbrug,” one of a class of imaginary persons who can never die but who are declared dead in law at the age of 80 and live on wretchedly at state expense. The 90th Scripps National Spelling Bee was won by Ananya Vinay, a sixth grader from California.

After finishing his run at the Scripps National Spelling Bee in 2017, Shourav and his sister Shobha, also a Scripps alumni, ran an online bee this year, in lieu of the national bee. They ran it through SpellPundit, a paid spelling bee prep service the two run.

This year’s Scripps National Spelling Bee which was planned for May 24, was canceled “due to the ongoing concerns about the spread of the novel coronavirus.” The only other time the event was canceled was from 1943 to 1945 because of World War II.

Although the SpellPundit Bee was not the same as the Scripps, it gave an opportunity for retiring eighth graders to have the last shot.

One of them was Navneeth Murali, an eighth grader from Edison, New Jersey, who won the contest by correctly spelling “Karoshthi,” an ancient cursive script used in Central Asia. Navneeth finished in the fifth place as a sixth-grader and 11th place as a seventh-grader at the earlier editions of the national bee. This was Navneeth’s last shot at Scripps.

Last year, Navneeth also won the 2019 South Asian Spelling Bee finals by correctly spelling “flipe” meaning to strip off by or as if by peeling.

Tejas lives in Henrico County, Virginia, and has attended the Scripps National Spelling Bee finals for four consecutive years. 2017 was his final year at the bee, where he finished tied for fifth place.

Ashrita, who has been participating in bees since she was 5, lives in Ashburn, Virginia. She competed in the 2018 and 2019 Scripps National Spelling Bees, where she finished as high as 42nd. In the virtual spelling bee hosted by SpellPundit this year, she tied for 7th place. She has one more year to compete.

Also included in the documentary are clips from participants’ families as well as their extended families from India. Whether it’s Tejas’ cousin vouching for him from Bangalore, or Ashrita’s parents finding new ways of calming their daughter before a contest, Rega shows how preparing for the bee is both an individual as well as a family affair.

Interspersed with these are commentaries and perspectives from comedian Hari Kondabolu, Scripps National Spelling Bee anchor for ESPN Kevin Negandhi, Balu Natarajan, the 1985 first ever Indian American winner of the national bee in 1985, Nupur Lala, winner of the 1999 bee, as as well as CNN Chief Medical Correspondent Dr. Sanjay Gupta and journalist Fareed Zakaria, host of CNN’s “Fareed Zakaria GPS.”

Zakaria delves into history. “[There’s this notion] that it’s somehow genetic or even ethnic,” says the journalist and TV commentator Fareed Zakaria, “but the Indians who do well in spelling bees in America are drawn from Indians who were very adventurous and decided to take advantage of the relaxation of immigration laws in 1965.”

Zakaria is referring to the Immigration and Naturalization Act, which President Lyndon. B Johnson signed in 1965, which allowed skilled South East Asians, Africans and Caribbean professionals to put down roots in the U.S. or rejoin family members already there.

Just as preparing for the bees takes months and lots of hard work, Rega told People magazine that he took months to research and document the spellers and their families. “We spent a lot of time with our spellers and families,” Rega told People. “We got to know them well. By the end of production we felt like family and you couldn’t help but want them to succeed. We felt the joy of winning and the pain of defeat.”

“Spelling the Dream” was well received by audiences and critics alike, but many argued that the documentary chose to ignore complexities of the immigrant experience and the pressures the children face to compete at a young age and the sacrifices the kids and their families make.

Some also drew comparisons with “Spellbound,” the Oscar nominated 2002 documentary which followed eight children competing in the 1999 finals, including winner Nupur Lala. It is even referenced in “Spelling the Dream,” as a piece of great inspiration for this later generation of expert spellers.

Reviewing the documentary for The New York Times, Bilal Qureshi writes that “Spelling the Dream” is missing “critical examination of South Asian parental pressure, competitive child sporting or the long-term value of rote memorization.” He writes that the documentary is a “sort of streaming-era reboot” of “Spellbound,” but “lacks the deep characterization, narrative complexity and critical distance of Jeffrey Blitz’s feature.”

According to IndieWire’s Kate Erbland, along with attempting to “address the question of why Indian American kids are such spelling stars,” “Spelling the Dream” also “gracefully moves away from that sort of monolithic thinking by introducing its four central subjects, plus various talking heads, on their own terms,. It also highlights how each speller is very different, Erbland says.