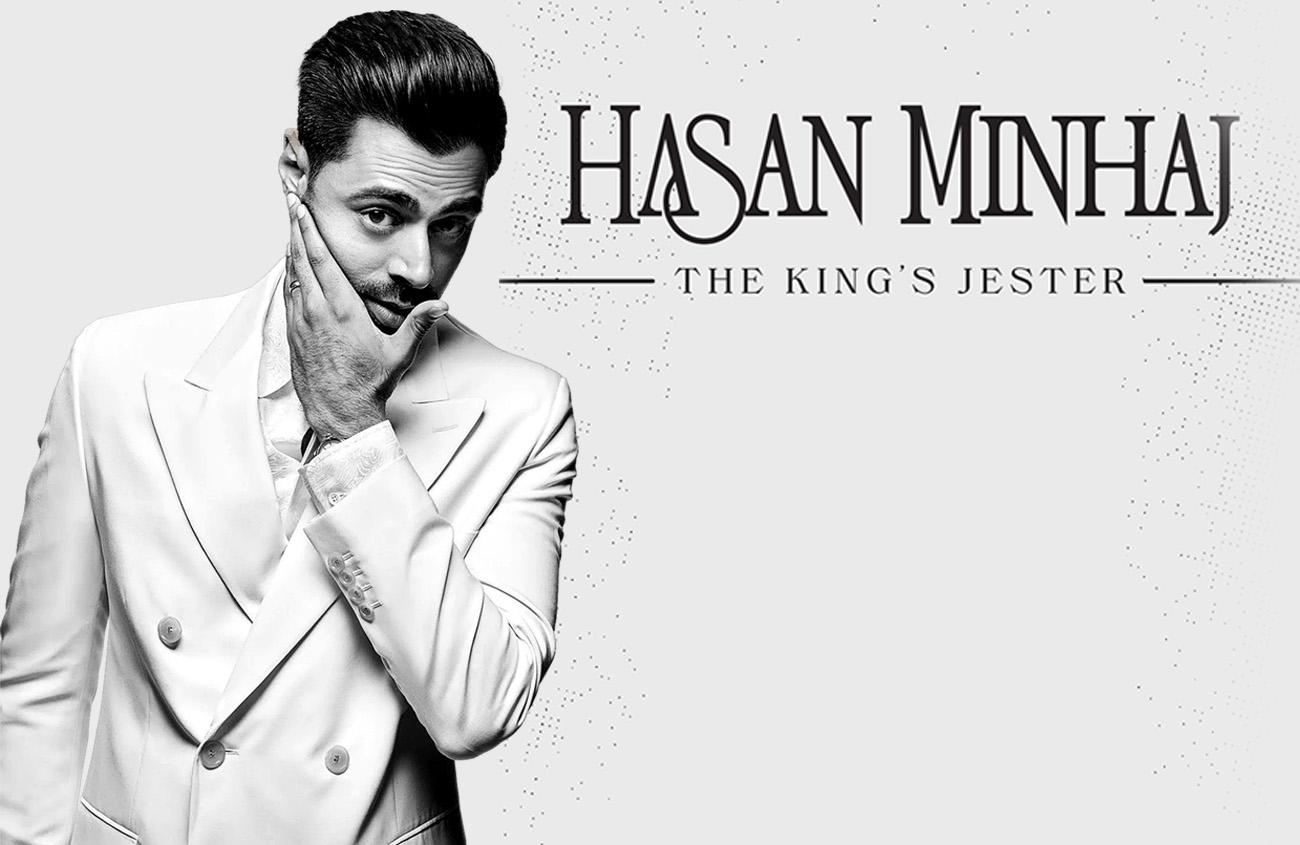 After losing his Netflix show “Patriot Act,” Hasan Minhaj is back on the comedy circuit, his primary claim to fame. His one-man show — “The King’s Jester” — is currently touring the country with shows in several cities including Detroit, Minneapolis, Chicago, San Francisco, Los Angeles, Washington, D.C., Austin, Philadelphia, Nashville, Durham, and New York City, among others. The show marks Minhaj’s return to his “storytelling roots four years after the global success of his Netflix comedy special ‘Homecoming King,’ which garnered rave reviews and won a 2018 Peabody Award,” his website says.

“We have liftoff,” Minaj tweeted on Sept. 18. “The tour is officially underway. We’re finally back in the theaters. Miami, I loved seeing all of you. Tampa and Orlando, let’s do this. Join me on the spaceship.”

Minhaj has also returned to acting, and stars in the second season of Apple TV’s “The Morning Show,” where he plays the role of new UBA anchor Eric Normani. The series tells the story of what goes down behind the scenes of your favorite morning news show, alleging that “the smiling, folksy anchors who greet you every morning aren’t just faking their friendships; they’re backstabbing one another at every turn.”

He told Decider that his earlier shows — “The Daily Show” and Netflix’s “Patriot Act with Hasan Minhaj” — have prepared him for his role in the Apple TV series. “I’ve been playing a fake TV anchor for seven years, so this wasn’t a stretch for me.”

In an interview with CNN, Minhaj said knowing how to read a prompter and read a copy directly to the camera made the role easy. “I could do all of my takes in one take, which is really lovely.” Minhaj, who was “already a fan of “The Morning Show,” told CNN that “getting to join the show and then stretch my own limitations, and start to do drama and start to do bigger, deeper pieces outside of comedy was really fun.”

Speaking about choosing “The Morning Show,” Minhaj told Entertainment Weekly that after “Patriot Act,” he was looking for something that he felt would be a really fun world to play in. “I really wanted to join an ensemble cast and be a part of something that still allows me to have the flexibility to tour and do the projects that I’m doing, but then also stretches me a little bit rather than doing a traditional single-cam comedy..” He said his role as Eric “seemed like a really fun world to play in, and the cast this season is just crazy. It’s like I died and went to the bar at the Golden Globes. And I’ve never been invited to the Golden Globes, so I’m like, ‘This is great!’’

Also the fact that Eric was “coming in to shake things up on a well-established institution,” was an added bonus. Minjah told Entertainment Weekly. “When you see where the show leaves off in season 1 and where it picks up in season 2, so much of what we’ve been talking about in the background of what’s happening right now socially and politically in this country when it comes to race relations in America, who gets a seat at the table, the backdrop of the 2020 election and COVID, it’s a really fun sandbox to play in.”

Prior to shooting his scenes in “The Morning Show,” Minaj called Chris Rock. When he told Rock that he was nervous, the comedian and actor told Minhaj that he needn’t worry as he already looks like a news anchor. “You look like someone who should be telling me what the five-day forecast is,” Rock told Minhaj, per Entertainment Weekly. “Everybody else on that set actually has to act. Reese Witherspoon has to act.”

He told Entertainment Weekly that he loves “the meta social commentary that’s happening right now, where there’s a lot of performers of color that are coming in that are joining these otherwise established franchises and putting their fingerprints on the American story and the American dream.” Noting that these roles speak to him, Minhaj said he “loves that I get to do scenes where I piss off both Reese Witherspoon and Jen Aniston. It’s pretty cool. My mom was calling me while we were shooting, she was like, “Did you get to do scenes with Rachel yet?”

“Season 2 of @themorningshow is now streaming,” Minaj tweeted. “I gotta thank Mom for helping me get cast on the show. Sure, everyone loves @reesewitherspoon, but America’s sweetheart is really Seema Minhaj.”

The new season of “The Morning Show” starts streaming on Sept. 24.

However, Minhaj doesn’t want to host a morning show just yet. “I don’t think I’m at that point in my career just yet, but I do have the experience,” he told Cinema Blend. “Look, if I ever have that point where I want to get up at 4 o’clock in the morning, do song and dance numbers, do a cooking segment, and then have a pet segment to close it out, I think I could do it. I just – I’m at this point in my life where I don’t wanna do the full Michael Strahan schedule just yet.”

Additionally, Minhaj will voice the Riddler in “Batman Unburied,” a forthcoming scripted podcast from Spotify in partnership with Warner Bros. and DC Comics. The Indian American comedian joins the cast of the superhero thriller from executive producer David S. Goyer, along with Lance Reddick, Toks Olagundoye, John Rhys-Davies and Ashly Burch. Variety reported that Spotify hasn’t provided a release date yet for “Batman Unburied,” announced last fall. “The series is the first project under a multiyear pact inked by the audio streamer with Warner Bros. and DC for narrative scripted podcasts,” the report said.

Described as a psychological thriller, Variety says “Batman Unburied” will take listeners “on a new journey deep into the mind of Bruce Wayne — introducing dark twists and turns with a number of classic Batman Super-Villains.” At the start of the story, Wayne is a forensic pathologist working in the bowels of Gotham Hospital and tasked with examining the victims of The Harvester, a gruesome serial killer preying on Gotham’s citizens. Wayne overcomes his mental demons in order to save the citizens of Gotham as Batman.