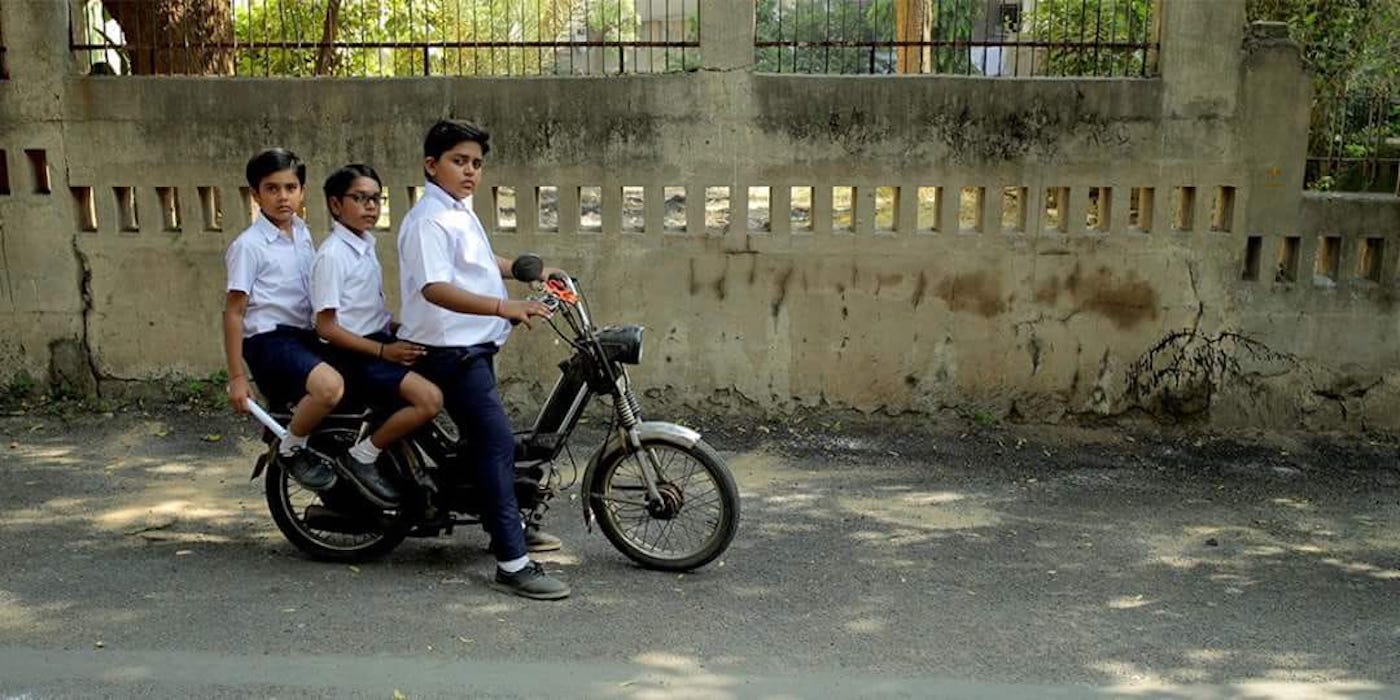 Last night I watched a really cute, “feel-good movie” streaming on Netflix. The title was cryptic, “Dhh,” and the film was in Gujarati but the subtitles and a smattering of Hindi were just fine. Once the cameras rolled, I was fully committed. Watching the movie was looking through a kaleidoscope and I was happily plunged into the magic of childhood. I am so glad that Manish Saini wrote the script and found funds to make “Dhh.”

It is an adorable narrative about three school friends. Gungun, the bespectacled Vakil and the nonchalant Bajrang. I was enthralled by the boyish trio but my heart was stolen by the insouciant young lad who was stuck in the same grade for three years. I have not had to repeat a grade but I have aspirations of being a backbencher. My school days tumbled out of the ziplock of memory. Many “bachpan ki yadein” floated around me like dazzling dragonflies. I found myself on the hard fabricated benches in classrooms with the boys. The nodding, giggling, messaging, and the chorus of “Good Morning” teacher made me smile.

Trying to make sense of interesting teachers (Brijendra Kala was the typical Hindi teacher who talked in riddles), their education styles and quirks were reproduced in the movie’s classroom. The well-enacted scenes subconsciously made me frown. Remembering a missed test, a poor grade, the flurry of anxiety about taking a report card home for signature was fresh again. Saini was marvelous in keeping the classroom drama real. The kids heroically faced the onslaught of pop quizzes, raising hands slowly, trying to avoid the teacher’s eye, solving math problems on the chalkboard or blackboard as we called it. Standing out in the hallway.

The three boys in “Dhh” were unable to wrap their brains around memorization of random facts. They faced the ridicule of teachers and classmates daily but they had a strong bond. It was heartwarming to see them scamper off together and scale the dusty roads on Bajrang’s small bike. The tension hits the roof when the headmaster summons Gungun’s grandpa to his room and shares their deplorable grades. The boys feel dejected and are plummeting in a downward spiral. They see a poster of a magician Surya Samrat and skip school to bury their study-woes in a magic show.

Naseeruddin Shah is the Bengali magician who holds the entire room in a spell with his legerdemain. The show was a classic Indian magic show. Simple but full of surprising props, drama, light, and smoke effects to engage the senses of a child’s brain. They were convinced that the powerful magician might help them with their midterm exams. They write and mail a letter of request in a shabby but functional mailbox in the village. The act of writing a letter was a sine qua non with childhood innocence. How many of us have written letters to Santa Claus and imaginary friends?

To their utter surprise and delight, they receive a reply and a magic doll with instructions to teach him to help with their examinations. The doll is a ‘bobblehead’ owl and they take turns teaching their “Birbal”. Soon by their conscious exam prep and collective dedication, their school performance improves. I started laughing out loud when the slackers started asking for more sheets. I had two friends in grade school. We were called the “three musketeers” or the “ghostly trio”. Long hours in school became more bearable by the simple hanging out, sharing lunches, walking back together from school, competing with the teacher’s pet for every mark. Pretending to be cool even though we were really nerdy!

It’s not a surprise that this 2017 Gujarati children’s film won the award for Best Feature Film in Gujarati at the 65th National Film Awards. The film was selected for 2018 Toronto International Film Festival in the kids category and was “India’s childhood film” entry for the Oscars. It won the Audience Choice Award at 2018 UK Asian Film Festival. This is a familiar but original story with a twist. We all have had our minds manipulated by agonizing curriculums pushed down our throats. There are so many bright kids who have been unable to cross the threshold of their own intellects because of tired methods of instruction.

Childhood education is crucial in imparting knowledge, critical thinking, and life skills in school but let us make it more effective by teaching it in a playful way. I will never forget how the three underdogs pull up an all-nighter studying for the quiz contest aided and abetted by one another and a thali of motichoor laddoos. We all need a bit of magic in our lives.

With one foot in Huntsville, Alabama, the other in her birth home India and a heart steeped in humanity, writing is a contemplative practice for Monita Soni. She has published many poems, movie reviews, book critiques, essays and two books, “My Light Reflections” and “Flow through My Heart.” You can hear her commentaries on Sundial Writers Corner WLRH 89.3FM.