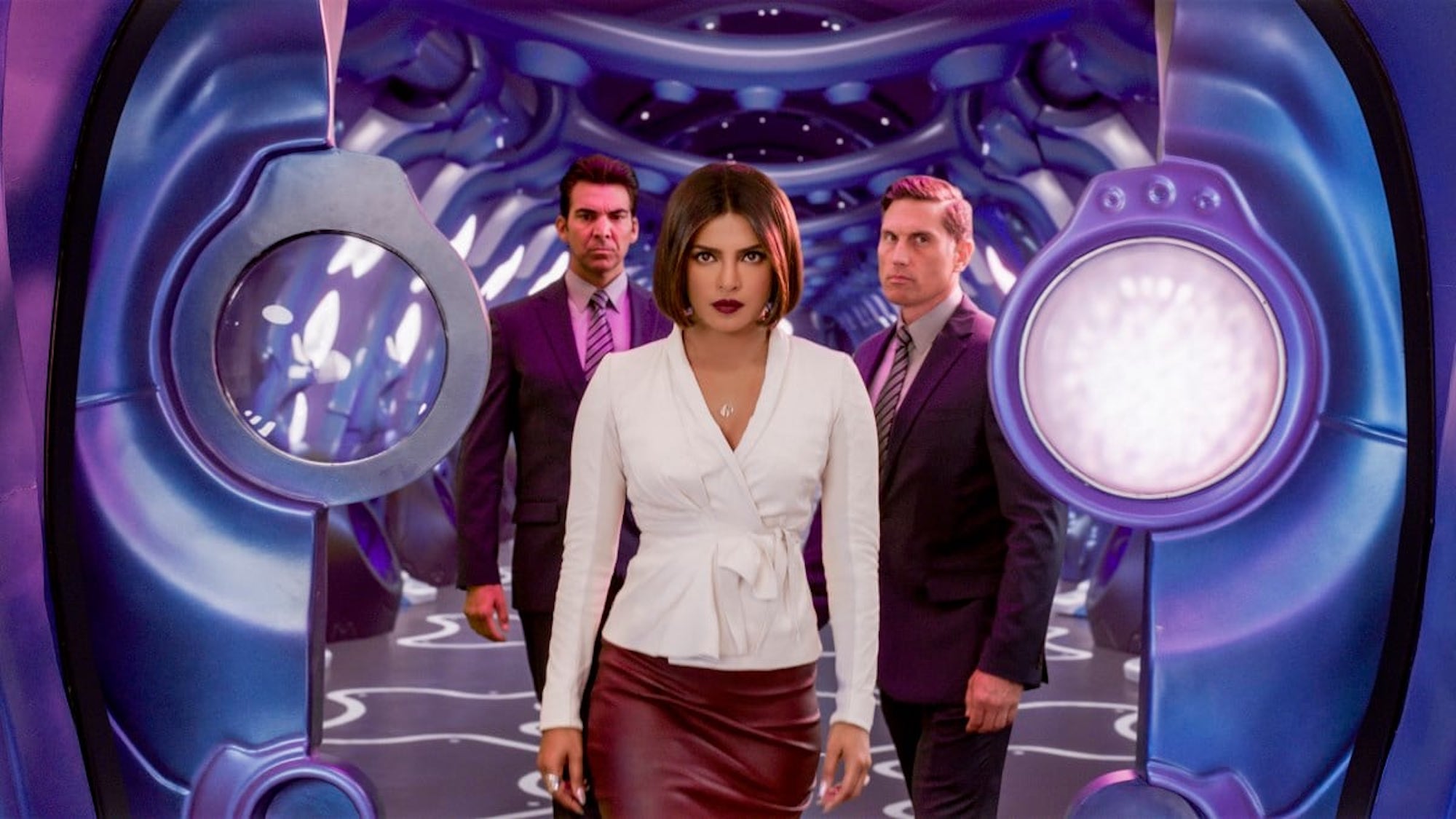 Sitting down on a Sunday morning to watch a sci-fi kids movie with my girls, was probably a recipe for a yawn-fest, but I was pleasantly surprised.

A group of superhero offspring team up to save their parents and the world in Robert Rodriguez’s Netflix fantasy adventure, “We Can Be Heroes,” which was released on Christmas Day. And it has amongst its stellar ensemble none other than B-Town’s A-list heroine, now a Hollywood transplant, Priyanka Chopra, in leather mini-skirt and high heels that lends a certain je ne sais quoi, to this superhero caper as a boss lady gone-bad.

From the director that gave us golds from “El mariachi,” “Desperado,” “From Dusk Till Dawn,” “Once Upon a Time in Mexico” to “Spy Kids,” and “Sin City,” “We Can Be Heroes,” both written and directed by Rodriguez, is a stand-alone sequel to his 2005 film “The Adventures of Sharkboy” and Lavagirl” and reminiscent of a children’s version of the “Avengers.”

Fast-paced and relatively funny enough, albeit in a children’s film sorta-way, to satisfy even those sleep-deprived adults on a Sunday morning, this wholesome family entertainment centers around adult superheroes, aptly dubbed the “Heroics,” who are kidnapped by giant purple tentacle-waving alien invaders and it is left to their quick-thinking children to save the day.

Among those captured by aliens is Marcus Moreno, played by Pedro Pascal, who with this movie, and the recently released “Mandalorian” (Disney Plus) and “Wonder Woman 1984,” is firmly cementing his status in the fantasy/sci-fi genre. Moreno, having retired from being a superhero in order to raise his motherless young daughter Missy (YaYa Gosselin) with the help of her loving abuela (Oscar nominee Adriana Barraza) is ordered out of retirement as leader of the “Heroics.” Unable to save the world from a potential alien invasion, Moreno and his team of superhero do-gooders find themselves taken captive. But, fear not, Moreno is in good company in confinement, what with Miracle Guy (Boyd Holbrook), Tech No (Christian Slater) and yes, Lavagirl (Taylor Dooley, returning to the role after 15 years) and Sharkboy (JJ Dashnaw, filling in for original Taylor Lautner) who join him in his imprisonment.

After her father is taken, Missy is escorted to a secure underground government facility headed by the officious Ms. Granada (Priyanka Chopra Jones, who seems to be relishing her authoritarian role). There, Missy, although without super powers herself, is introduced to a roomful of superhero kids equipped with a wide variety of superpowers. There’s Rewind (Isaiah Russell-Bailey), who can turn back the clock a few moments; his twin Fast Forward (Akira Akbar), who can speed up the clock, but can’t seem to stop fighting with her brother; A Capella (Lotus Blossom), with her telekinetic voice who can do amazing things like lift objects, people and even a whole train compartment with her singing voice and; Noodles (Lyon Daniels), who can stretch his body in some very peculiar ways; Facemaker (Andrew Diaz), who can alter his appearance at will; and even Sharkboy and Lavagirl’s progeny the chubby-Guppy (Vivien Blair), a cross between Groot and a shark on Jaws, who can shape water and has super human shark strength along with a pair of chompers that can eat through metal!

There’s even a brilliant wheelchair-bound kid whose muscles are too strong for his legs to support them, and a goth-like girl who draws the future on her iPad like some kind of Surf Ninja but refuses to speak till the very end, when she delivers the message of this whole film (but I don’t want to give away the ending quite yet!), and Slow-Mo, the constantly smiling kid who’s stuck in perpetual slow-motion; and if he is worried about disappointing his super-speedy father (Sung Kang), you wouldn’t know it, by the smile on his face. Quite a medley of skills that sure come in handy as the film unfolds.

Missy is naturally the brains behind the operation, but she often takes a backseat to the insecure Wild Card (Nathan Blair), who has every superpower in the world but no ability to control them — at one point he even turns into a toaster, complete with fresh bread. He finally learns to believe in himself (a sub-message of the film) thus harnessing his super powers and helps his team and Missy win the day.

There’s even a nod to President Trump. One of the characters is a golden-haired, simple-minded though clandestinely evil U.S. president (Christopher McDonald) whose nonsensical ramblings cause one kid to complain, “How did this guy ever get to be president? He can’t even put two sentences together!” Nicely put Mr. Rodriguez!

Figuring out that they are the only ones who can save the day and the planet, the kids escape from the detention like holding pen of a facility, team up and train under the tutelage of Missy’s grandmother, who has trained all the parent superheroes, and still has a secret training area in her beautiful begonia-laden backyard. Eventually, the squabbling kiddos harness their powers, learn to work as a unified team in order to take down the aliens aboard their fancy giant spaceship. The somewhat over-extended, elaborately staged action sequence at the end provides the film’s biggest set piece and will probably inspire many future alien battles.

The adult part of the cast is certainly the draw, but it’s the kids who keep you invested in the movie.

You know what you’re here for. You want to see Pedro Pascal and Boyd Holbrook reunite after “Narcos.” You want to see Christian Slater, Sung Kang (#JusticeForHan), Haley Reinhart, and Priyanka Chopra be awesome. And you want to see Taylor Dooley reprise her iconic role as Lavagirl. But they aren’t the stars of the show. That doesn’t mean they aren’t good in their cameos. Pascal is on a roll right now. He can slip into any role that you throw at him and you know he’s going to give it his hundred percent. Christian Slater and Sung Kang have their funny moments. Reinhart is magnetic. Dooley is good and Chopra is tolerable, but barely in a hammy kind of way. Chopra delivers a 90’s version of Cruella DeVille in her role as boss-lady-gone-bad with fair skill.

But the real stars of the show are definitely the kids. Vivien Lyra Blair as Guppy is definitely the star and if someone hits upon the idea of a spinoff starring Guppy, they may have a winner on their hands because she is the most adorable superhero! This five-year-old girl whose adorable Hulk-like freak-outs inspires one panicked character to utter the film’s finest line: “Look out, she’s got shark strength” will make you go awww for sure with her pouty-pouts and karate kicks.

YaYa and Nathan’s performances could’ve easily become annoying but they keep it under control and make them an interesting pair to watch. Walken, Blossom, Lau, Isaiah, Akira, and Lyon are brilliant and knock it out of the park when it’s their turn in the spotlight. And the only person who comes close to being as good as Guppy is Facemaker i.e. Andrew Diaz, which is yet another character that in the hands of any other director may not have worked but left me entertained.

Much like Rodriguez’s “Spy Kids” films, “We Can Be Heroes” proves to be silly, light-hearted fun for its target audience, blissfully free of unwieldy, clumsy acting and enlivened by some antic humor. The filmmaker also once again proves he’s a technical whiz with a relatively small budget, infusing the proceedings with brightly colored special effects that resemble a hybrid between comic books and videogames and making them effective despite their so-obvious artificiality.

The movie also delivers a wholesome message as most children’s movies do – the need for the older generation to make way for the younger generation because the system needs an overhauling.

After 90 minutes of using superhero tropes to suggest that every generation of kids is more evolved than their parents, Rodriguez brings things home with a reveal that could hardly be any more explicit about the message it is trying to imparts: Adults are inciting young people to fight amongst themselves instead of working together against the real enemy, and America’s future depends on its children finding a way to harness their diversity and self-belief into a weapon strong enough to defeat…..the Republicans (oops, I should have said shape-shifting purple squid aliens…).

Although most kids might be too young to connect the dots, it’s never too early to start making a little good trouble.

Unabashedly aimed at an audience who’s more familiar with Disney characters, “We Can Be Heroes” is an enjoyable, low-budget, high-energy, feel-good movie with heart, meant for all ages.  Featuring some decent performances, this “Avengers” for kids is definitely worth a look-see!

Tags
Lavagirl Netflix Priyanka Chopra We Can Be Heroes