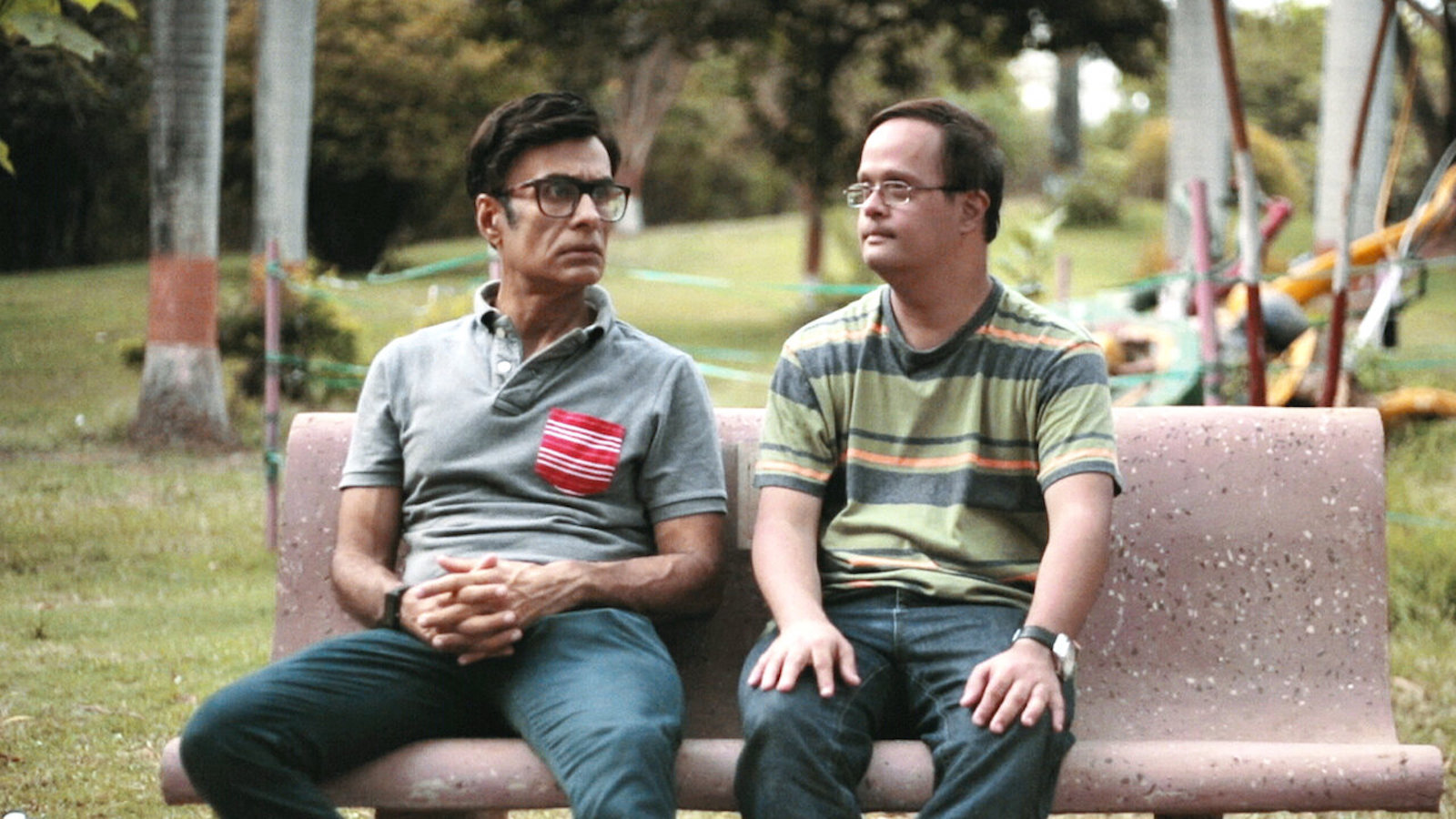 Rarely does one come across a genuine, feel-good movie, full of warmth and heart, that will leave you with that warm fuzzy feeling, cheering for the lead protagonist. “Ahaan,”  a film about a 25-year-old with Down Syndrome, by first time writer-director Nikhil Pherwani will do just that. Down Syndrome is a genetic disorder that causes physical and developmental delays and disabilities.

Ahaan (Abuli Mamaji), like many young men and women, dreams of a steady job, a nice house, a wife and two children – one girl and one boy. But for now, Ahaan lives in a housing complex for the well-to-do in Mumbai and along with his trusted friend and caretaker Hari (Haresh Raut), helps his overprotective, chef mama (Shilpa Mehta) with her home-made brownie business. His father (Kaizaad Kotwal) is a stern, no-nonsense individual, who finds it hard to relate (maybe even love) his Down Syndrome son. His peers in the building find him irritating and often pokefun at him, addressing a deep-seated societal issue – disdain for those suffering from a mental illness.

Amongst the building aunties to whom Ahaan delivers the mouth watering brownies to is Anu aunty (Niharika Singh) and her OCD, germaphobe of a hubby Ozzy (Arif Zakaria). This childless couple is having troubles of their own, stemming mainly from Ozzy’s obsessive-compulsive disorder, which has even led him to not want children (coz we all know how messy little people are) and his inability to seek help, which strains the marriage. In Ahaan, Anu sees her much-longed-for child, a sweet boy, whom she loves to feed, he delicious chicken biryani and gajar ka halwa to. Ozzy doesn’t feel the same. Rattled by Ahaan’s disregard for his cleanliness protocol, the clean freak and his wife have it out, resulting in Anu leaving Ozzy.

Jolting him out of his stick-to-itiveness, Ozzy befriends Ahaan, first as a ploy to get his wife back and enjoy her cooking (both sharing an appreciation for it) and then genuinely, as Ahaan’s childlike guilelessness breaks down his defenses, reconnecting Ozzy with his softer, paternal side. Through the unlikely friendship between Ozzy and Ahaan, Pherwani has scripted and directed a charming, funny and sweet story of a camaraderie that develops between the two men and the unlikely, life-changing bond that develops between them. In Ozzy, Ahaan finally finds the father figure he has sorely lacked and is searching for someone who can guide him in matters of the heart and give him the confidence to get out into the real world and find gainful employment, all of which Ozzy does.

Ahaan is shown developing a romantic interest in a young HR professional called Onella (played by the lovely Plabita Borthakur from “Lipstick Under My Burkha” and “Bombay Begums”). She is warm and friendly and loves Ahaan’s company, but the film steers clear of exploring the question of what might happen if and when he expresses his feelings for her. Something, I personally, would have liked to see the movie deal with, in trying to portray the normalization of a person with a disability.

Ozzy also enlists an unconventional therapist (Rajit Kapur), who uses exposure therapy to help his patient overcome his OCD, all contributing to a happily ever-after for Anu, Ozzy and Ahaan.Pherwani’s film, drawing inspiration from Pranay Burde’s real-life story, is supported by an earnest cast.

The sweet and uncomplicated tale gets its soul from Abuli Mamaji’s authentic performance as someone who has lived the experience of navigating a world with Down Syndrome, delighting in all of life’s little joys. Mamaji is a Mumbaikar who, like Ahaan, was born with Down’s Syndrome. Mamaji’s acting is so impressive that he is all the proof naysayers should need for the representation of persons with disabilities in stories, films and in the acting profession too.

Persons with disabilities are rarely leads or even significant supporting players in Indian films.

Not only does “Ahaan” make an adult with Down’s Syndrome its central character, there is no melodrama, and no clichés – maybe there’s hope for Hindi cinema yet! Our films usually introduce a specially-abled person as a comic relief or to draw sympathy, side-lining the real issues they face, because the film is never about them. But “Ahaan” is about them, and for those who ‘handle them’ as caregivers, parents, and friends. The film is praiseworthy for its clean, unpretentious script with a logical approach. It, thankfully, deals with real issues, without being preachy or in your face.

As Firstpost says in its review: “When seen through Pherwani’s lens, Ahaan is a man with massive challenges but is never an object of pity. The camerawork by Saket Gyani and Dipankar Sikder is at no point exploitative, and not a single shot is designed to invoke pity or contrived to make its viewer tear up.”

However, the film does not do quite as well with the writing of Ozzy as it does with Ahaan. The script is unable to go much beyond the vague public awareness of Ozzy’s disorder that results in the casual reference to the term “OCD” to signify anyone who is particular about cleanliness and orderliness. As many of us know, that is a very simplistic view of a serious mental condition.

There is also a lack of awareness of any caste and class concerns, and they are glossed over.

For example, as part of the exposure therapy, the therapist pushes Ozzy to shake hands with a stranger on a train, implying that that man can indeed justifiably be deemed dirty and untouchable, because he seemed to come from an impoverished background. The hand-shaking scene misses the extreme complexity of that situation in caste-ridden India. Do note that other things Ozzy is made to do in that passage include walking barefoot on a filthy beach and being forced to visit a stinking public toilet, also seems to overly simplify the issue of OCD.

Still, Zakaria is wonderful and takes to the role ably, proving his mettle once again. His irritation, frowns, anger, frustration as a man obsessed with cleanliness, his unpretentious way of delivering dialogues makes the film look very natural, as if the role was tailor-made for him.

And Ozzy’s learnings through his interactions with Ahaan somewhat compensate for the over-simplification of his condition and the politically problematic treatment of his circumstances.The scripting of Anu too lacks depth. She goes out of her way to be kind to Ahaan, but her exasperation towards Ozzy comes off as lack of empathy, and we know she is capable of so much of it. Reasoning provided here is that this is largely because she is already at the end of her tether with him, but we are never given a chance to understand the years-long journey that brought this woman who was probably once a loving wife to this juncture in her marriage. Quite simply, no effort is made to bring home her pain and stress in that period to the audience, she unfairly ends up seeming unfair to Ozzy.

The handling of Ahaan’s difficult father is far more plausible and thoughtful: Ranjit (Kotwal) is not painted as uncaring, but rather shown at the end as afraid and uninformed. Kotwal gives a realistic performance, despite his limited screen time, which honestly could have been increased to explain the father-son dynamic and Ahaan’s search for a father figure.

However, it would be remiss of me to ignore Rajit Kapoor, who otherwise a fine actor, seems to have forgotten how to act in his short cameo. Haresh Raut needs special mention for the flavor and comic relief he brings to his role. Raut seems to be a very natural actor and is a pleasure to see. Plabita Borthakur as the neighborhood girl and “love-interest” of Ahaan, deserves a nod for her essaying of the role. Niharika Singh, within her limited range to play with emotions, impresses as a responsible wife, a kind human being, who though tired of her husband’s OCD, has enough empathy to embrace his change.

According to Firstpost, Pherwani (who assisted Amole Gupte on 2011’s “Stanley Ka Dabba”) met Mamaji in 2013. A considerable part of the director’s research for the script included observing the young man and spending time with him. The actual shooting was a slow process and was done in 2016-17. The outcome of this investment of time and attention to detail, is a well-detailed and authentic depiction of a person living with a disability on the Indian screen.

With a well-paced narrative, “Ahaan” is an optimistic, entertaining, insightful poignant film that works towards normalizing mental disabilities and mental health issues. Ahaan is streaming on Netflix.