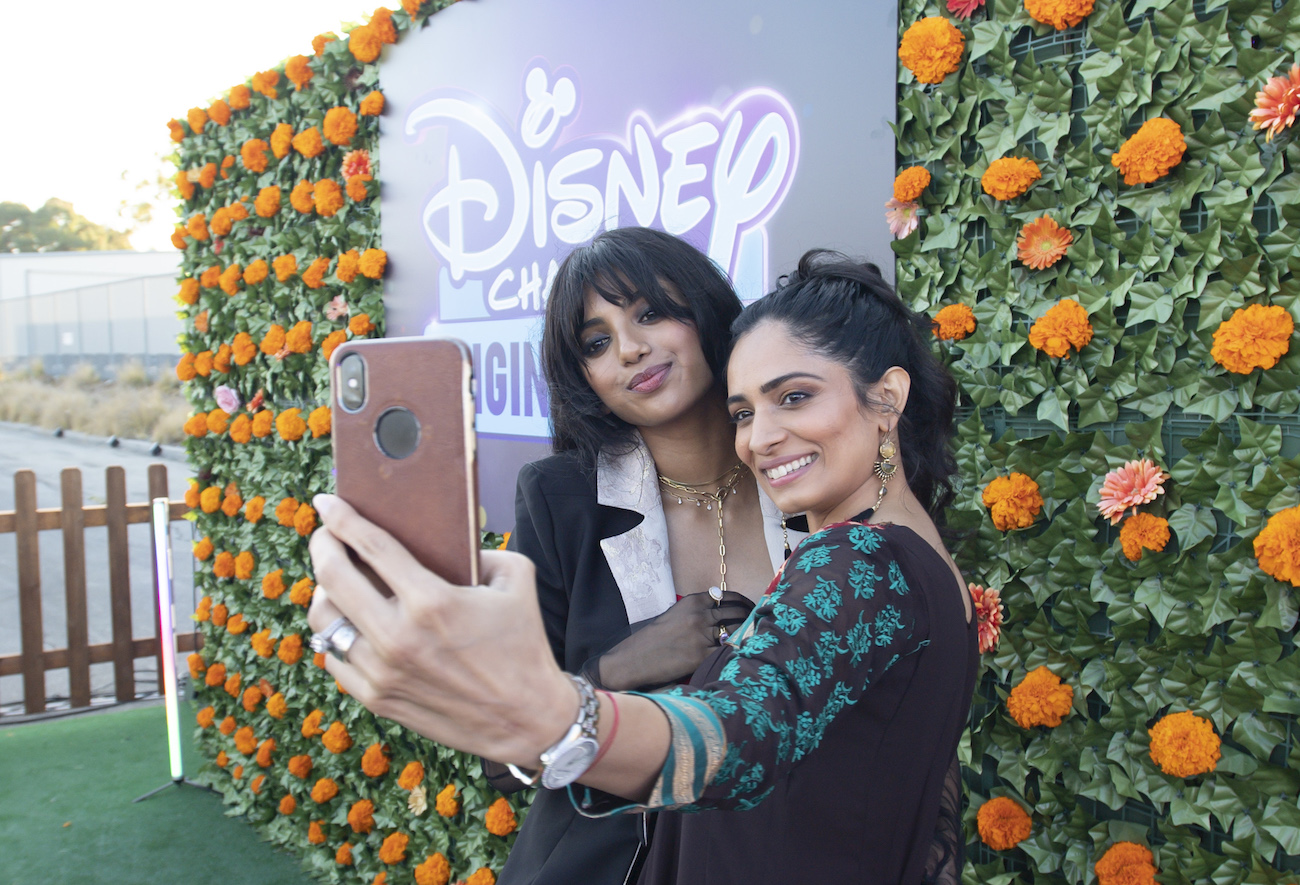 I Plan to Vote ‘No’ for the Recall of Gov. Newsom and Pick a Candidate to Replace Him. Here’s Why

Close on the heels of the success of “Skater Girl,” filmmaker Manjari Makijany’s second feature “Spin” was released on Disney earlier this month, becoming the channel’s first movie featuring an Indian American lead. It follows 15-year-old Rhea Kumar (played by Avantika Vandanapu), who lives with her tight-knit multigenerational family, and her struggles in navigating her dual identity — Indian and American. Makijany describes “Spin” as “a coming of age story about how Rhea goes and makes this beautiful music that makes her who she is.”

In a Zoom interview with American Kahani, the 34-year-old Los Angeles-based filmmaker spoke about both her feature films, challenges of shooting during the pandemic, and diversity and representation in Hollywood.

Makijany was excited when she read the script for “Spin,” as she saw it as “an opportunity to present our Indian culture to the mainstream audience.” She saw it as a medium for mainstream audiences “to take a slice of life of India, to experience its spirit and flavor “in such an accessible way,” with “an eclectic palette of colors, music.”

Deep diving into “Spin,” Makijany was confident that the mainstream audience is “more than ready” for an all-Indian cast. “I think we are long overdue on having stories about Indian Americans as protagonists and in leading roles,” she says. “And it’s a story not just for the Indian diaspora,” but is “universal and relatable across different backgrounds.”

There was also a sense of familiarity with the coming-of-age theme of the film, having previously explored it with “Skater Girl.” However, she’s quick to point out that it was a coincidence, because “these are the stories that speak to me, the triumph of the human spirit against all odds. And it’s exciting to follow that journey, it’s inspiring.

Set in a remote village in Rajasthan, “Skater Girl” is a coming-of-age story about confidence, courage, and the profound impact of blazing your own trail. It follows Prerna, a local teen living a life bound by tradition and duty to her parents. But when London-bred advertising executive Jessica arrives in the village to learn more about her late father’s childhood, Prerna and the other local children are introduced to an exciting new adventure thanks to Jessica and her friend Erick who cruises into town on a skateboard.

The kids get hooked on to the sport, skating through the village, disrupting everything and everyone around them. Determined to empower and encourage their newfound passion, Jessica sets out on an uphill battle to build the kids their own skatepark, leaving Prerna with a difficult choice between conforming to society’s expectations of her or living out her dream of competing in the National Skateboarding Championship. The film, which was released on Netflix, in June, has been receiving rave reviews.

With both “Skater Girl” and “Spin,” having somewhat back-to-back releases, Makijany describes it as “a lovely joyride exploring these two different stories. One set is rustic, rural India and the other one is vibrant and sort of colorful and fresh and modern.”

For “Skater Girl,” Makinjay and her sister, Vinati Makijany, threw themselves totally, not just into making the film, but also constructing a skate park in the remote village in Rajasthan where the film was shot. “We were there every day when we constructed the skate park, in the trenches with the team that was constructing.” They employed over 350 locals from around the state. “It was just incredible,” Makijany says, “because it’s very rare that you get the opportunity to have art imitate life and life imitate art.” They made the skate park “as sort of a centerpiece for the film,” she says. Things that were happening at the park found their way into the script and similarly, things that were being seen in the film were happening on the ground with the children. So it was just beautiful. It makes you realize that as a filmmaker there are moments when you realize that what you are creating and putting out there can be quite a powerful tool.”

There was a different kind of involvement with “Spin,” when she made a pitch to Disney to open up the casting to a global ensemble. “The studio really supported that vision when they saw that it would make for a more authentic cast.”

“Spin” has a diverse cast, with mostly Indian American actors and an established Abhay Deol from Bollywood, along with Meera Syal, Kerri Medders, Aryan Simhadri, and Michael Bishop.

About Deol’s casting, Makijany says “it was amazing to get somebody who didn’t have to put on an Indian accent and play the dad.” And Avantika, who played Rhea is herself an Indian American, “so she naturally has that accent.” But the diversity was not just limited to the casting, it was present “across the board,” which “is a reflection of the world we live in,” she says. “And that was important to have in both on-screen and have it also off-screen.”

The film had representation as well, in both casting and the crew. Noting that “times are changing,” Makijany credited “the people in leadership positions in studios like Disney and Netflix, who have taken it upon themselves to make sure that it [representation and inclusion] is part of the conversation.” When people in power hire someone like her, “it speaks volumes of how the narrative is changing around diversity and around sort of who’s behind the lens.” And when she comes on board as a filmmaker, “that decision automatically translates into who I am casting, into who I am hiring.”

And along with representation, Makijany says they made sure that with “Spin,” the barrier of stereotypes was broken, because we didn’t want to have a typical Indian caricaturish family.” Makijany herself knows “a lot of families” in the U.S., “who are pretty contemporary, they celebrate their culture and they celebrate their heritage. It’s part of our ethos; it’s part of who we are and that was important to represent on screen.” And this went beyond characters that weren’t Indian, like Rhea’s friend and confidante, Ginger, “who would otherwise be a mean girl, but she’s actually a cheerleader and is a support system for Rhea.”

“Spin” was shot entirely in the pandemic, which Makinajy says has been a setback for independent films. “A lot of festivals were canceled; a lot of festivals went online, so it’s definitely affected the industry in sort of a larger perspective.”

But Spin” was shot in Toronto, with a lot of care. “Protocols were in place, there was a whole covid team in place, and we were in masks and shields, and testing three times a week, and making sure that there’s sanitation everywhere. “Filmmaking is anyway a challenging process and on top of that you are doing it during a pandemic and it becomes difficult sometimes; just pure communication becomes tricky, so we all had to recalibrate. So the crew began using Boleros (NFL/Olympic style com tec) to communicate with crew on set, “and that became sort of our savior.”

Makijany notes how the OTT platforms have given filmmakers the ability to reach 200 countries the day of the release. “That’s something that you didn’t have before.” She harks back to the time when filmmakers would be “waiting nervously on a Friday evening and seeing what the box-office reports would be.” Noting that now things are “so fast-changing right now, it’s no more about anticipating the distributor will come back happy.” Of course “you lose some of the upsides that theatrical gives you,” she admits, “but I do think that it’s [OTT] an incredible opportunity for news filmmakers to explore new stories and for producers and studios to take more risk in dabbling with things that they wouldn’t have otherwise. It also gives filmmakers the freedom to open up the casting, like in “Spin.” And “even if it’s theatrical, I think audiences are much more open to a diverse cast,” she adds.

Makijany is the daughter of actor Mac Mohan. Growing up, she was exposed to a lot of theater, and that’s where she got her love for filmmaking. “We were exposed to a lot of theater and got to experience the different stage plays and the different worlds come to life,” she says. “I was always fascinated by the fact that here is the audience, literally, and there is sort of the world being created,” she continues. “With celluloid, you have that screen and you have that difference, but with stage, you are right where you are experiencing.” She found that process “fascinating very early on,” although at the time she had “no clue” that this is what she wanted to pursue.

She recalls her father being “always encouraging,” when she confessed to wanting to become a filmmaker and choose a different path. Those early conversations with her father “greatly influenced and shaped” Makijany’s first job. Her father discouraged her from going to university to learn filmmaking and instead be on set, and learn what it’s like to be on set, which became her film school.

She didn’t get any advice from her father or her cousin, actress Raveena Tandon. “They never really sat me down and gave me any sort of advice,” but were always there to support her. “I was brought up in a protected environment and it was more about learning, about being grounded, humble, and putting in the hard work and making sure that you learn on the job.”

It was only after coming to Los Angeles that Makijany formally learned filmmaking and screenwriting, “after years of assisting and learning on the job.” She eventually became one of eight directors selected for the prestigious American Film Institute’s Directing Workshop for Women Program (AFI DWW) and the second Indian woman to be part of the program since its inception in 1974.

She began her journey as a director with her critically acclaimed short film “The Last Marble,” which won Best of Fest at the Clermont-Ferrand International Short Film Festival. It was followed by “The Corner Table and “I See You,” which won Best Short at the Asian American International Film Festival and was showcased in Cannes at the Emerging Filmmakers Showcase. Along with her husband and partner Emmanuel Pappas, she heads the boutique production company Skatepark Films.