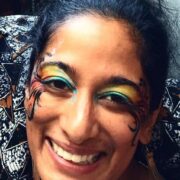 I moved to New York City on September 4, 2001, after living and working as a journalist in my native India. A week later, the city and country changed forever and then turned viciously on the most vulnerable South Asian New Yorkers. As I reported my first book on Muslim immigrants facing violence across the Western world, often in cities they had helped build or kept running, I saw South Asian women thrust into vulnerability across this city I love – dragged from their homes in the middle of the night, their doors battered down without warnings or warrants, their husbands and fathers and sons disappeared without a trace. And I saw South Asian feminists standing bright and strong like lampposts, raising their voices to organize and hold each other up. Now, when we commemorate occasions like Women’s History Month and International Women’s Day, we have a chance to stand with powerful South Asian feminists across New York City and the international feminist movements that gave rise to them.

When I was a child, I thought Indian womanhood meant serving – men, elders, respected guests. Everyone but yourself, really. I saw the women in my family touch the feet of people who sometimes humiliated and disdained them, cook and feed others while swallowing their own feelings and ambitions. It was only when I moved to India as a young woman, reporting for a daily newspaper on the teeming city of nine million that lay beyond the walls of my staid family home, making girlfriends outside of my insular community and watching my aunts and cousin sisters not just at home but at work, that I discovered another version of Indian womanhood: Indian feminist womanhood.

It was in Chennai, my father’s home city by the sea, that I began to see that Indian womanhood – South Indian womanhood especially – meant resisting. My aunt’s husband forbade her from working, so she volunteered to give vocational training to blind and disabled women, so that they could work and support themselves. My other aunt, an abuse survivor, held a free weekly literacy class for poor domestic violence survivors in her living room.

Their resistance was an echo of the powerful South Indian feminist movements led by historically marginalized and oppressed women. It was only by stepping outside of my family home and into the city streets that I came to see these traditions all around me. One night, my newspaper sent me to cover the launch of a women’s health initiative, and just outside of the stuffy meeting stood a woman at the center of a circle of seated women, speaking in a clear, bright voice through a loudspeaker. She was a sex worker, unionizing other sex workers. Through her, I met other women leading efforts to organize migrant workers, domestic workers, disabled women from poor families, and unhoused women fleeing violence. On paper, the city’s most vulnerable, in the flesh these women were using their voices to build power and stand tall.

Indian feminism, especially South Indian feminism, has been a driving force in Indian liberation struggles both at the local and national levels. My father’s home state is Tamil Nadu, located at the southern tip of India. It was there in 1925 that a man named E.V. Ramaswamy Periyar founded the Self Respect Movement, which radically critiqued caste- and gender-based oppression in Tamil society, ultimately transforming politics and governance in the state forever.

Durgabai Deshmukh, a former child bride from the South Indian state of Andhra Pradesh, went on to become a lawyer. In 1938, she founded the Andhra Mahila Sabha to empower a young nation by empowering its women. Emerging from the leadership of feminist, anti-caste, and anti-poverty thinkers, the original Indian Constitution remains to this day one of the world’s most revolutionary pro-liberation documents.

In this same tradition, South Asian feminists in New York City are working within their own communities to dismantle the barriers that hold South Asian women back. As I saw in Chennai, some of the most transformative community-based organizing in South Asian communities is led by women from communities that have been historically oppressed in South Asia and marginalized here, including undocumented people and domestic workers, women from caste-oppressed or religious minority groups in India, and women from Bangladesh, Nepal, and Sri Lanka.

A year after 9/11, I found myself in a plain room with a slightly sloped floor on the second story of a mixed-use building in Jackson Heights. A group of undocumented workers, largely from Bangladesh, were making signs and flyers for a protest against the mass deportations unleashed by a new U.S. policy called Special Registration. A dry-erase board presented objectives, organizing theory, and upcoming dates written in different colors and at least three languages. The organizers were with Desis Rising Up and Moving (DRUM), established in 2000 by Monami Maulik in response to the civil and human rights crisis rapidly unfolding in South Asian New York. DRUM worked alongside peer organizations like South Asian Americans Leading Together (SAALT), led by lawyer Deepa Iyer in the years after 9/11 to organize against the targeting of South Asian Muslim communities with political and physical harm. In the months and years afterward, sitting on folding chairs in wide circles under fluorescent lights, speaking over the clatter from the elevated train tracks outside the window, South Asian women continued to tell their stories – not just to support and comfort each other, but to find common threads and set shared agendas.

After 9/11, cultural spaces became critical in rallying and comforting a bruised community. DJ Rekha’s iconic Basement Bhangra dance parties brought together South Asian New Yorkers from all over the subcontinent, spanning the entire political and socioeconomic spectrum, to sweat together in joyful catharsis every month at the beloved downtown venue, SOB’s. Desilicious, created for and by LGBTQ+ South Asians, celebrated proud queerness that was deeply, culturally South Asian, even as queer communities faced open persecution and terror in their South Asian homelands. The South Asian Women’s Creative Collective, founded in 1997 by feminist artist Jaishri Abichandani, helped launch the careers of dozens of important South Asian American women artists like Chitra Ganesh and Yamini Nayar, and protested sexual violence in South Asian communities in countries of origin and the diaspora. These cultural institutions, created in living rooms and kitchens across South Asian New York, gave us spaces to find personal liberation and build collective power. And in these spaces, our communities became visible to ourselves and our city.

This year, New York City Council welcomed its first two South Asian New Yorkers, both of whom are rooted in South Asian feminist and progressive community-based organizing. Shahana Hanif, the city’s first Muslim woman city council member in a city with nearly 800,000 Muslims, came up through such groups as the Bangladeshi Feminist Collective and Bangladeshi Americans for Political Progress. Shekar Krishnan – whose family, like mine hails from Tamil Nadu – came to politics through his work as a housing justice advocate (in my own Brooklyn neighborhood, in fact).

Feminism for My Family

I have now lived in New York City for more than 20 years myself, and for the last decade, I’ve raised my children here. As those two young, biracial Black and Indian New Yorkers grow up and learn to see themselves in a society that often reviles Black people and erases Indian people, I have struggled to find meaningful ways to connect them to both of their rich cultures. Despite the interpersonal and patriarchal violence that women in my family have survived, we belong to an upper-caste family with access to education, power, and high-status legal immigration to the U.S.

My father may have come here with the proverbial thin wallet, but as my dear friend and South Indian feminist Suchitra Vijayan says, he also came with a steamer trunk full of social capital. Moreover, many of the cultural practices I was raised with are steeped in caste-based oppression. I am loathe to inculcate in my children – who are also descendants of people who have survived slavery, the genocide of Native peoples, and Jim Crow – any supremacist values. At the same time, I am unwilling to appropriate the culinary and musical traditions of Black and diverse South Asian cultures that are not my own. Perhaps the purest way I can find to connect my children to their heritages – and connect those heritages to each other – is through feminism.

In seeking to name and respond to trauma – and moreover, in gathering to create spaces for liberation through art, music, dance, and joy – South Asian feminists have also been influenced by the foundational work of Audre Lorde, Bell Hooks, Kimberle Crenshaw, Tarana Burke, and other Black feminists. And so, while I will certainly teach my children to read the feminist teachings of great thinkers from both Black and South Indian traditions, I will also teach them to celebrate their existence as Black and South Asian feminists have taught us to do.

As my husband drops the needle on a recording of Gang Starr’s “Manifest,” bringing Nadaswaram and Thavil notes under a sample from James Brown’s “Hipster’s Avenue,” I am transported back to our shared youth in the clubs and basements of New York City. Our kids turn off the living room lights and fling themselves about in wild abandon. On the table, a Tamil-style salty mixture and Utz chips sit side by side in bowls. The goddess Meenakshi stands on our shelf beside a statue of Black woman in a headwrap and apron that we found in a Botanica shop in Flatbush, both visages peering down at our kids’ writhing bodies. I join my family, dancing, grateful for the feminist leadership, dreaming, and radical love of Black and South Asian New York.

(This piece was originally published as part of The WNET’s Group’s Community Connections series.)

Kavitha Rajagopalan is a writer and the community engagement manager at the Center for Community Media at CUNY’s Newmark J-School. She is the author of “Muslims of Metropolis: The Stories of Three Immigrant Families in the West,” and a contributing author to several edited volumes on migration. Her writing has appeared in The New York Times, The Nation, The Atlantic’s Citylab, among others. She lives in Brooklyn, New York, with her husband and two children.