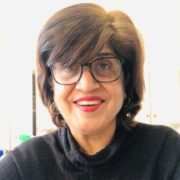 The recent horrific death of an unarmed Black American, George Floyd has once again confirmed the strong grip of colorism on this nation’s psyche. Unfortunately, racism is not exclusive to the U.S. Discrimination based on color is ubiquitous in varying degrees all over the world including my own home country, India. Growing up in New Delhi in a newly independent India, I often heard stories from family elders about the inhuman treatment of the native Indians at the hands of the British imperialists in colonial India. Yet, curiously and rather inexplicably, the Indians themselves are guilty of discriminating against each other on the basis of color. Otherwise how is it that the “Fair & Lovely” beauty cream still reigns supreme in the world of beauty products in India? Consider it a rhetorical question.

When I recently saw an online ad for Fair & Lovely, I couldn’t believe my eyes. Somehow, I had assumed that this most popular skin-whitening product from my childhood days with what I consider a most demeaning name, had by now become defunct in India. You would think that with the great strides in education and fulfilling careers made by the women back home, this kind of cosmetic would have no meaning today. But apparently not. Far from languishing, this name brand, the prototype of future skin whitening products in India has, in fact, even expanded its beauty line from years ago. India has an unfortunate obsession with light skin. Period. Fair skin is the hallmark of beauty. Period. Fair is beautiful and dark is not. Period. Sad but simple as that.

During my childhood years, being the only daughter with six sons in a North Indian family, I grew up feeling that I was the ugly duckling because unlike my brothers, I was not as fair skinned. I often recriminated with my poor mother, that I didn’t inherit her rather white complexion and instead took after my father who was a lot swarthier. My wise mother would reassure me that I was not dark but wheatish. Of course, I was convinced that she was consoling me. And she was. “Wheatish” is the polite term used for various shades of brown in India. You could be light wheatish or dark wheatish or anything in between, but you were sadly just not fair-skinned. So, it didn’t help that I a wild tomboy who insisted on doing everything with my outdoorsy athletic brothers was woefully a rich deep brown.

While my own immediate family didn’t make a big deal about this supposed beauty lapse, I recall with amusement now (it wasn’t funny then) how the relatives especially the elders tried to hastily suppress their pity or horror (okay, I am exaggerating a tad to make a point) when they were told that this rather scrawny girl, was the only daughter in the Bhandari family of tall strapping and mighty handsome brothers. Remember they were fair. Oh, I was certainly doomed in the eyes of these so-called well-wishers. Heck, there was no way I could snag a good matrimonial match (the ultimate goal for girls in those days) because the girls who had the greatest chances of finding the best spouse had much lighter skin. You see a girl’s prospects as a matrimonial catch grew better in direct proportion to how fair she was. You often heard foolish remarks like, “She has good features but she is dark.” I am not kidding, a girl could be as plain looking as a doorknob but if she was light skinned, she was considered undeniably gorgeous. So apparently, my matrimonial prospects with a wheatish complexion, that too buried under shades of a rich brown tan were close to zero.

In all seriousness, Indians especially in North India, though I believe this is true of most India but to a lesser degree, are inordinately proud of their fair skin. Whether this feeling of superiority is due to the fact that Northern India was repeatedly overrun by foreign invaders through the passes in the mighty Himalayan mountains, ultimately setting and intermarrying with the dark-skinned natives leading to lighter skin tones or it is the legacy of British colonization that contemptuously and inhumanely deprived the Indians of their basic rights due to their dark skin, I am not sure. But this abnormal fixation on skin pigmentation was real — very real in my time. And I believe it continues today though probably not as blatant.

However, unlike me who was generally immersed in the make-believe world of books and playing outdoors, the average young Indian girls with my affliction were focused on bleaching their skin in every which way possible. Remedies ranged from daily applying lemon juice, yogurt, milk and you name it any natural ingredient they were told could help them in their obsessive mission to become fair. So acute was this misguided preoccupation with lighter coloring that many mothers would not allow their daughters, especially the ones blessed with fair skin, to have tea which as you may know is as critical in India as coffee is in the West.

The rationale was that the color of tea would darken their complexion. To this day, I have girlfriends who are unable to have tea as they never got into this habit in their childhood. And I won’t be surprised if it’s because they secretly still adhere to that rather odious logic. We are talking about black tea here not the green and other vapid herbal teas that are so popular in the U.S. For us Indians, well-brewed black tea is the real deal. The rest are just fads. Thankfully, having a sane mother, I wasn’t deprived in that respect and am a tea fiend today.

And it was in those years in the early to mid-70s, capitalizing on the fair skin craze that the astute major companies came out with the brilliant idea of whitening creams and such products with revealing names like “Fair & Lovely” and even “Fair & Handsome.”  Yes, this market was now becoming gender-neutral. It is indeed a sad reflection on our Indian society that these beauty products caught on like wildfire. This was a society that in its matrimonial ads (yes arranged marriages were beginning to use a bit of technology now) wanted brides who were “fair-complexioned” even using asinine phrases like a “milk-white complexion.” It was a culture that instead of focusing on an expectant mother delivering a healthy baby, privately worried that the newborn if a girl might somehow inherit the family’s dark skin genes. So obviously these whitening beauty products were akin to magic.

It was against this background of an unhealthy preoccupation with skin color that I landed in the U.S. in the mid-80s as a young bride who by now thanks to the taming of my outdoor lifestyle due to constant nagging, was now a lighter brown or as well-wishers diplomatically stated, a true wheatish complexion. As a young high school teacher in my very early twenties, some well-meaning older colleagues would admonish me often to get out of the blazing sun when I was working with the students in outdoor extra-curricular activities. Not because they were worried that I would have a heatstroke, an entirely plausible reason, but because I would become black. I could provide innumerable examples of such scoldings over the years premised on the dire threat of me remaining an old unmarried maid if I didn’t get out of the infernal Indian sun.

Anyway, this “wheatish” term was truly my saving grace in the U.S. When initially much to my amazement many of my new Caucasian friends complimented me on my skin tone, I was secretly convinced that they were just being kind to a new immigrant, until I ultimately realized they were truly appreciative of my natural complexion. Thereafter, I took great delight in explaining to them even somewhat smugly, that I was the golden color of wheat the staple food in northern India.

But honestly, to see these very white friends slathering themselves with sun protection while roasting in the blazing sun for hours to achieve my skin shade or even a darker hue was true irony. It was then that I started appreciating myself fully and in fact, basked happily in the admiration of my white friends. I was privately thrilled that I didn’t have to bake myself in the unrelenting summer sun. Rather I felt immensely blessed to have been born with my natural golden “tan.”

On my first visit back home in New Delhi after many years in the U.S., I recall clearly the first reaction of my Indian friends and family. They were stunned to see me. All they could exclaim initially was as to how clear and fair my skin had become relative to my early years in Delhi. Needless to say, my former mother-in-law was truly thrilled. Now her only daughter-in-law was truly a suitable match for her prized fair-skinned only son. In all seriousness, due to living in a cold climate, free from pollution along with a sedate lifestyle as a young mother, I had lost all vestige of any tan.

And apparently, I had now the proverbial much sought-after fair complexion by Indian standards. While flattered, I truly didn’t care at this point but was actually disillusioned that even the most educated and professional people were still mired in this kind of puerile thinking.

The good news is that today there is growing awareness and resistance against this obsessive color mania in India due to movements like “Dark is Beautiful” endorsed by many enlightened celebrities. These anti-colorism feminist movements are doing much to help against this shameful color bias in many arenas including advertising. Dusky Indian beauties winning national and international beauty pageants are hopefully changing the somewhat stubborn Indian mindset.

But clearly, a lot still needs to be done to correct what I consider to be deep-rooted inbuilt racism in the Indian society. Hopefully the movement against this the dark skin stigma will gain even more momentum and women themselves will realize that each is unapologetically beautiful in her own right — this message being ingrained right from childhood.

Raksha Krishna started as a high school teacher at Delhi’s historic Modern School, where she worked until she immigrated to the U.S. in 1987. Serving in progressively more responsible positions, she moved from legal research and case management at fast-paced, corporate law firms, to a leading energy trade association in Washington D.C., where she served as Director of Federal Regulatory Analysis and Editor of numerous industry publications. As a single empty-nester, Krishna is now living life on her own terms, following her passion for creative writing and giving back as a liberal grassroots political activist.

A Manthan On the Move: Visiting India, the Vast Land of Multitudes and Contradictions

A Plea to My Fellow Indian Americans: We Should Not Bring Indian Socialist Ideas to the American Shores

Girl Child in the Big, Bad World: What We Sow in Our Children Today Society Will Reap Tomorrow