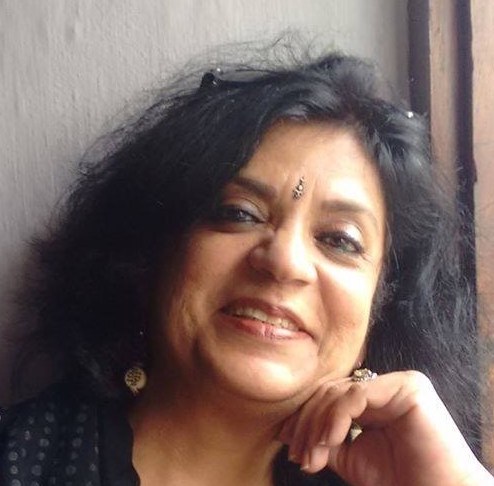 Kamla Bhasin had covered a lot of ground in her 75 years on the planet when she passed away a couple of weeks ago. As her numerous compatriots claim, she may be no more here in person but her spirit will love on in her fiery chant, “Hum Bharat ki Nari hain, Phul nahin, Chingari hain!” (We are the women of India. We are not flowers but sparks of change.)

With her infectious laughter and boundless energy, Bhasin disproved the myth spread by right-wingers that feminists are dry, humorless, frustrated women who hate men. Through her numerous books for young girls as well as her poetry and talks, she proved that the women’s movement is vibrant and fun, as well as enormously important to the lives of women the world over. During the half-century of her work in the diverse fields of women’s rights, gender training and human development, she has inspired thousands of feminists across numerous countries.

Bhasin’s funeral was worthy of the veteran feminist. It is appropriate that it was full of music, for this was a woman who used songs to transform lives, and she was carried to the electric crematorium on the shoulders of two generations of feminists. This too was revolutionary, for in India the body of the deceased person is usually carried on the shoulders of male relatives and women do not participate actively in it in public, often banned from entering the cremation grounds as they are considered too weak to handle the stress.

Born in 1946 in Punjab, in a village that is now a part of Pakistan, Bhasin went on to study in Rajasthan, and then at the University of Munster in Germany. She started her career as a lecturer at the Orientation Centre of the German Foundation for Developing Countries in Bad Honnef, Germany, but later came back to India to work for Seva Mandir in Rajasthan. Here the main emphasis was on mobilizing marginalized rural groups for their own development and she worked with them to organize agricultural, economic and educational activities for their economic progress.

In this period, Bhasin wrote extensively for newspapers on the impact of development programs on people in the rural hinterlands. Her publications number over 19 books that include “Borders and Boundaries: Women in India’s Partition,” co-authored with Ritu Menon, “Some Questions on Feminism and Its Relevance in South Asia,” “Ladki Kya Hai, Ladka Kya Hai,” “What is Patriarchy?” and numerous books for young people.

It is noteworthy that she reached out to all age groups, from her peers to small children, introducing them to concepts of feminism and women’s empowerment in a manner that few feminists have been able to do. The veteran feminist combined her perspectives as a women’s rights activist as well as a mother herself to spread the awareness that both the father and the mother need to share childcare instead of leaving that entirely to women.

When leafing through books on poetry for young children she had been dismayed by the patriarchy and androcentrism of many of the nursery rhymes and that led her to pen her own memorable rhymes in a book titled “Housework is Everyone’s Work – Rhymes for Just and Happy Families.” A poem in the book is titled “Geela Chotu” (Wet Chotu) about a father changing his infant son’s diapers.

How many feminist theorists can pen such appealing lines, lines that speak to little children and their parents alike? Kamla Basin reminds me so much of Kerala’s Sugathakumari. Two great icons of the feminist movement who have moved on leaving us to carry the torch. Her work was not just for her peers but people of all ages.

Upon her return to her homeland, Bhasin went on to found the South Asian feminist organization Sangat, which works with women from marginalized rural and tribal communities, often using theater, songs and art to spread the message of gender justice. This South Asian feminist network was started in 1998 in Bangladesh at a meeting of Gender Trainers. They named it the South Asian Network of Gender Activists and Trainers and they work on many issues related to gender equality, class equality, democracy, pluralism and diversity, human rights, communal harmony and peace and organize training programs for women across Asia.

Bhasin played an integral role in what is described as the Second Wave of feminism, for she has been a prominent voice in the women’s movement both in India, as well as in other South Asian countries from the 1970s. In 2002 she quit her job at the United Nations to work full-time with the underprivileged in India.

House Impeachment Drama: The Republican Zeitgeist and Can We Bridge This Divide?

Indeed, she often denied the notion that feminism was a Western concept, stating, “We didn’t become feminists by reading Western feminist theories. We became feminists by looking at the realities of women in the example of the village what was dowry doing to women, about domestic violence, how women were being treated at home and in society.” She maintained that feminism is not a war between men and women but rather a fight between two ideologies, one that elevates men and gives them power, and the other, that advocates for equality between the two genders.

Her work focused on women’s rights as human rights, long before Western feminists made this their credo. It is all the more relevant in today’s world where regressive religious movements have made inroads across South Asia, targeting women as the custodians of the honor or izzat of the community. In fact, the nationalist chant of ‘Azadi’ (freedom) which echoed across protest sites in India over the past year had been popularized by Bhasin as a feminist slogan against patriarchy. She had first come across it in her travels in Pakistan in the mid-1980s, where feminists used it against the dictator, General Zia Ul Haq, but she gave it her own unique spin in chants that she led at feminist gatherings across the nation.

The eminent activist has been interviewed across the world, and one of the most noteworthy was in the last episode of the popular TV show “Satyamev Jayate” anchored by Aamir Khan. The episode, as they describe it, was on toxic masculinity, and with her unique wit and insight, she made viewers aware of how toxic masculinity lies at the root of all the horrendous violence taking place worldwide in the form of war, terrorism and religious fundamentalism and urged the viewer not to love power but to pursue the power of love. Her comments were bold and forceful and made people sit up in shock.

“If I am raped, people say that I have lost my honor. How did I lose my honor? My honor is not in my vagina, it’s a patriarchal idea that my rape will defile my community. I’d like to ask everyone why your community’s honor is in a woman’s vagina? We never did that. It’s the rapist who loses his honor, we don’t.”

She believed that women in South Asia are falling behind because of three problems, patriarchy, right-wing politics and religious fundamentalism. One of her most famous poems is the one she penned on the girl child, a poem that is all the more relevant today, in a part of the world where women and children are increasingly under threat.

Dr. Shoba Sharad Rajgopal is Professor of International Feminist Studies, at Westfield State University in Massachusetts, where she works as Chair of the Dept of Ethnic & Gender Studies, and teaches courses on Gender, Race, and Sexuality. Her doctorate is in Media Studies from the University of Colorado, Boulder. Before she arrived in the United States, she worked for seven years as a broadcast journalist for the Indian TV networks based in Bombay (Mumbai), India, and has also done in-depth news reports for CNN International. Her journalistic work focused on the struggles of women and indigenous people in the postcolonial nation-state. Her work has been published widely, in academic journals as well as newspapers in the U.S and India.