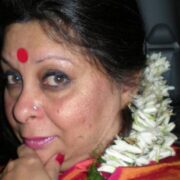 It is my endeavor to explore in a series of articles, how Hindu sensibilities intersect with Muslim artistry to create unique saris/artifacts in the Indian subcontinent. How, for example, the sari, a quintessentially Hindu/Indian garment, is taken to its height of beauty by Muslim weavers; in effect, I wish to explore our integrated cultural history. This is relevant in the context of the multicultural richness of South Asian culture when we are being torn by political polarization along communal lines. I start with the Jamdani sari which is a perfect example of the two traditions coalescing to create a thing of beauty.

A Jamdani sari belongs in the domain of the ethereal. The ‘Jamdani’ is the surviving variety of the world-renowned muslin. In my grandmother and mother’s closets were fine muslins from Dhaka and their rustle told of untold secrets. Their colors were pale like the waning moon, fiery like the setting sun, and every other shade in between. They enchanted and bewitched. Even today, this sari satisfies Aquinas’ three elements of beauty: proportion, clarity, and integrity (consonantia, claritas and integritas.) It claims its own stakeholder rights not only in Bangladesh, where it is handwoven but around the world, where it is exported.

The name ‘Jamdani’ comes from Persian words, ‘jaam’ which means ‘flower’ and ‘daani’ which means ‘vase.’  The name suggests the floral motifs woven into these saris. These motifs, like the bergamot notes in a perfume, are meant to uplift the wearer’s senses and aesthetics.

What about this fabric, which originated in Mosul (Iraq), made the Sufi poet and scholar Ab’ul Khusrow wax eloquent? He wrote, “the skin of the moon removed by the executioner-star would not be so fine … it is so transparent and light and it looks as if one is in no dress at all but has only smeared the body with pure water.”

Ancient Roots of the Weave

This fabric was woven in ancient India. The earliest mention of the origin of Jamdani, and its development as an industry can be found in Kautilya’s Arthashastra, published around 300 AD. Alexander the Great and his general Seleukos Nikator sought it out. Queen Nur Jehan patronized the production of this cloth to fashion her fineries. Most notably, Indian muslins were favored by the Sultans of the Ottoman Empire — the word ‘turban’ is derived from ‘tulbent’ the Turkish name for muslin. People from grand empires, from Italy, Egypt, Greece, Arabia, and of course, England, came to India to trade in muslin. The Romans were so ecstatic about this diaphanous fabric that they said was like ‘woven air.’ Pliny, the Elder, the friend of the Roman emperor, Vespasian, lamented the money that was being spent on Indian muslin.

The new incarnation of that famous fabric is the Jamdani. The fabric is woven much like tapestry work. Small shuttles of gold, silver, or colored threads are passed through the weft. (The warp is the threads held longitudinally on the loom, while the transverse weft is drawn through and inserted over and under the warp.) It forms an intricate pattern in the body of the fine material.

Different patterns have different names. A diagonal pattern of floral sprays across the sari is called a ‘tercha.’ The end of the sari, the pallu, is decorated with bold corner motifs called the ‘jhalar.’ What is lust-worthy is a sari called “panna hazar” (thousand emeralds) the floral patterns are enhanced with gold and silver thread flowers that are encrusted in between like real gems. One of my personal favorites is the nilambari, which is a sari dyed in indigo.

There are three ways to judge an authentic jamdaani — by thread count, by the quality of the thread, and by its design and execution. The sari looks diaphanous but its tensile strength is high, befitting the sari wearer, who may look fragile but is strong inside.

Most of the weavers who make the Jamdani saris are Muslim. Islam is a monotheistic religion that doesn’t believe in idols (more generally, figures) which allegedly challenge the omnipotence of Allah. Hence, there are no figures in Jamdani saris as we have, for example, in baluchari saris in West Bengal. Jamdaanis have floral or geometric patterns but weaving is not easy. It is a laborious and time-consuming process. Many Jamdani weavers, Jiaul, Tutul, Ashraf, Munni, Iqbal, Zayed, et al, tell me that it takes one month to one year to weave a sari depending on the complexities involved.

Many women have a curious fascination with Jamdani saris. They love the way they look but they wonder about the stiffness of a new Jamdani sari. Will it drape well? Will it be too revealing?

The Making of the Sari

These saris are made from locally grown cotton. Bundles of thread are dyed in many colors. Then they are strengthened and softened by soaking overnight in rice water starch. The starch still remains even when the sari is completed. Once the starch is removed, the sari is very pliable, ensuring an elegant drape. These saris come to us from the Muslim culture, where the dress code for women is decidedly conservative. Most Bangladeshi women wear Jamdani saris; even those who wear hijabs. I’ve found that darker colors, saris with intricate designs, half silk and cotton saris are not as transparent. The prime minister of Bangladesh, Sheikh Hasina, is seen in most international gatherings in her special 200 count Jamdani.

The Jamdani is produced in the greater Dhaka area, but the term is very loosely used in the Indian subcontinent sometimes to mean a Jamdani kind of weave. The copying of the Jamdani weave does far less damage to the genre than did the British, whose self-aggrandisement ruined India’s agricultural and handloom textile industry. We are fortunate that the industry has been revived by the government and NGOs. The problem is that the weavers are still very poor; much of the margin is usurped by middlemen. While social entrepreneurs like myself figure out how to correct these imbalances, at least the looms are humming.

The categorical imperative to buy a Jamdani is not simply because of its aesthetic value or its value as an heirloom. It is to protect the weaver community from going extinct just as one protects a rare or endangered species. And further guarantee the weavers and their associates continued livelihood to enable them to live above the poverty line, free of corruption. In these days of sustainable fashion, it is gratifying to wear a garment that comes to us through a common cultural heritage, from the fields of Bangladesh, colored by the weaver’s experience of rain and rainbows, and built by the love of an entire community.

Pia Ganguly is the CEO of Pia Ka Ghar, a haveli in the hills of Los Altos in Silicon Valley. (www.piakaghar.com).  She is a social entrepreneur and the primary mission of PKG is to promote inclusive growth in the Indian subcontinent and make someone’s next day a little bit better.  She loves dogs and works to feed 250 street dogs in Calcutta everyday.

The Other Side of Interracial Marriage: What’s it Like to be Married to an Indian