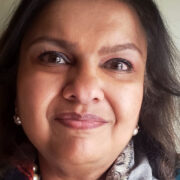 In 1995, shortly after I graduated college and started working as a software engineer in New Jersey, I recall a visit by relatives from India. It was my aunt, Sunita (my mother’s younger sister – my chitti) and her husband accompanied by her in-laws. I vividly recall a conversation where Sunita masi’s mother-in-law noted my independence and expressed her envy, saying that I was lucky. When I inquired why she felt that way, she replied, “You have a job where you earn money. You are self-reliant and therefore your husband must show you respect.” That conversation has stayed with me.

Growing up in India, I had seen many women of her generation living in large joint families, seemingly content with their prescribed roles within their households. I had always assumed that the feminist idea of independence was something that only ‘modern’ women like my peers at an elite girls’ school in Kolkata aspired to. Hearing a woman from my grandmother’s generation express that same sentiment, I was struck by the universality of the basic human need for freedom. Freedom to be yourself, to express yourself, to be respected for the person you are. For women all over the world, that has been especially challenging.

Moving to New Jersey as an undergraduate, I experienced freedom that felt like homecoming. I finally felt like I fit in. I often say that I was a Democrat before I could vote. It means that I embraced the values of the Party and its platform. I loved the Democrats’ big tent: their ideas of inclusion, equality and equity. As a feminist who loved her independence, I applauded their support for women’s rights, including the right to abortion and birth control; their values respecting bodily autonomy, pay equity, universal child care, and the list goes on. I did not want the government to interfere in my private decisions: I wanted the government to ensure that I had equal and fair opportunities that matched those of my male peers.

We have seen some progress with respect to equality, but have also felt backlash. Many states have tried to roll back Roe v. Wade, and in Burwell v. Hobby Lobby, the Supreme Court authorized corporations to deny coverage of birth control to their employees. In addition, rights for immigrant spouses have been severely curtailed by the Trump administration’s decision to halt the issuance of H4 visa work authorizations. Thus, the sole avenue for spouses—mostly women from India—to obtain employment and achieve independence, is no longer available.

Make no mistake: this is a war on women. This is not about small government or being pro-life. If it were, they would not be advocating for regulating women’s healthcare, nor would they oppose measures to contain the Coronavirus. It is about controlling women and their bodies. And the last four years under the Trump administration has brought us closer to the dystopian society presented in Margaret Atwood’s Handmaid’s Tale.

In fact, we are now on the verge of appointing to the Supreme Court a woman who actually belongs to the group that Atwood based her novel on. A group which preaches women’s subordination to men and until recently called female advisers to other women “handmaids.” She herself has served as one. A woman who failed to disclose two prior speaking events for anti-abortion groups, nor did she mention signing her name to a paid advertisement criticizing Roe v. Wade. A woman who is being handpicked to repeal the Affordable Care Act, a law that has saved countless lives. A woman who not only has troubling views, but has demonstrated her callous indifference to the health of her family and those around her by participating unmasked at the White House super spreader event announcing her nomination.

Maya Angelou famously said, “When someone shows you who they are, believe them the first time.” Amy Coney Barrett and the Republicans have shown us who they are: believe them. They would like nothing better than to reverse the progress that women have made. I am not casting judgement on women who love to cook or who choose not to work outside of the home and raise their families. I chose to do that myself for fifteen years until my own twin daughters started college. However, it was my CHOICE. They want to take America backwards to a time where women were expected to obey the men in their households, and the ONLY role for them was to stay ‘barefoot and pregnant,’ and in the kitchen.

The Wire v Meta: How Facebook Caters to Fascists and Authoritarian Regimes, Including India’s

Let us send a message this November — we are not going back. Stand with me and vote for Vice President Joe Biden and Senator Kamala Harris, as this proud Indian American, immigrant, feminist will do.

Anjali Mehrotra is on the National Communications Team for South Asians for Biden and also serves as a leader of the Indians for Biden National Council. The thoughts expressed in this piece are Anjali’s own personal views; she does not speak for groups affiliated with the Biden/Harris campaign, or the campaign itself. Anjali is active in New Jersey Democratic politics and an advocate for women’s rights as President of the National Organization for Women of New Jersey.

Roe v. Wade in Jeopardy: Let’s Vote Like Our Daughters’ Lives Depend On It