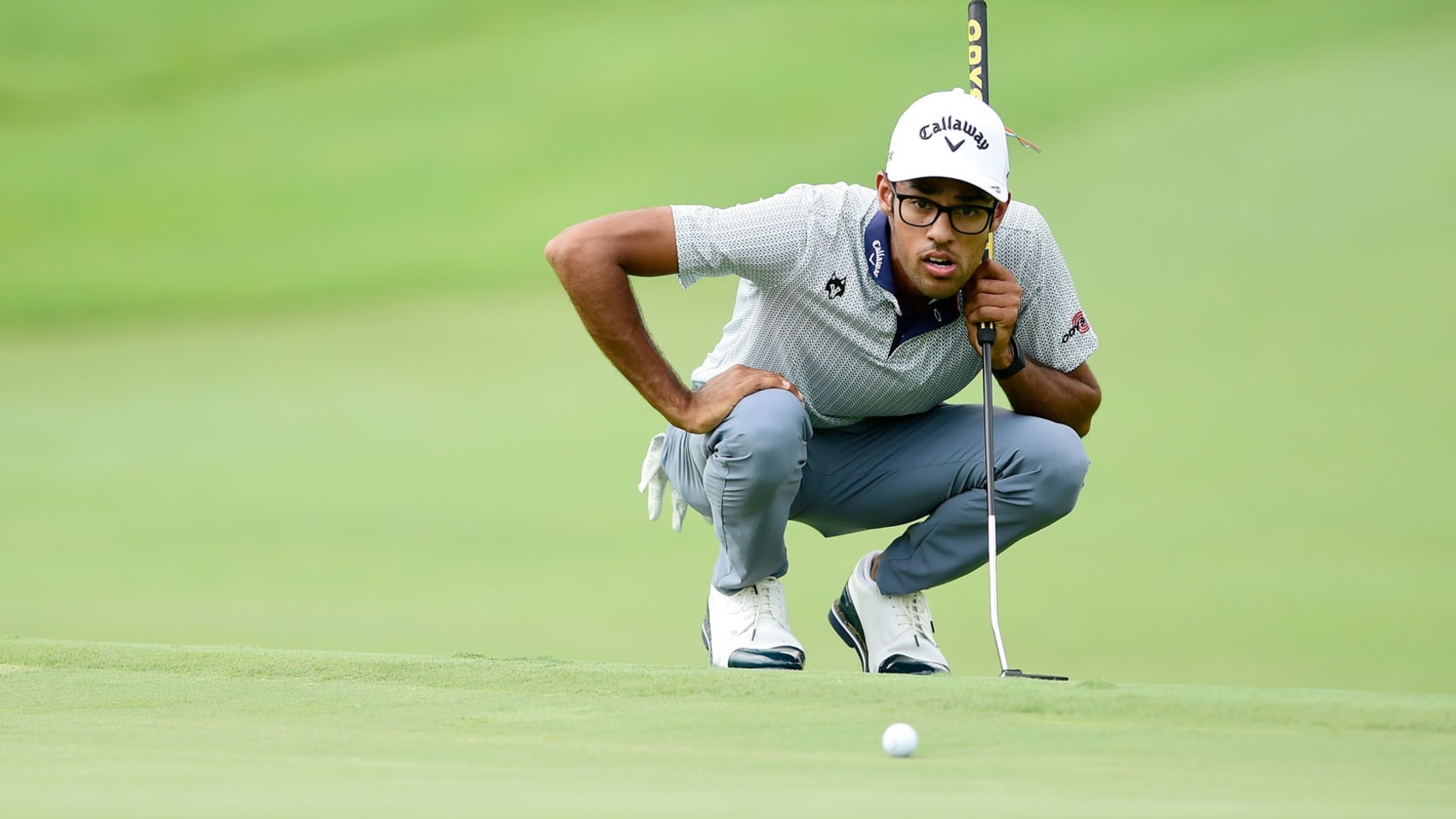 Earlier this month, Akshay Bhatia became one of four players in the last 25 years to hit all 18 greens in regulation in a tournament round at the Pebble Beach Golf Links in California. The 19-year-old Indian American from Wake Forest, North Carolina, was playing the AT&T Pebble Beach Pro-Am “on a sponsor exemption,” as per Golf Digest. He became the first golfer to accomplish this feat since Ryan Palmer in 2008. He’s also the youngest player to shoot 64 or lower on the PGA Tour since Joaquin Niemann did it at the 2019 Greenbrier Classic.

Bhatia, who’s just “Shay” to his family and friends, had a rocky start when he turned professional in September 2019. He made his PGA Tour debut at the Valspar Championship on a sponsorship exemption, but he missed the cut. That season (2019-2020), Bhatia missed making the cut in six tournaments. Right before turning professional, Bhatia won the 2019 Jones Cup Invitational.

However, he had better luck at the mini tours. Bhatia made his mini tour debut in April 2019 on the Web.com Tour, at the Robert Trent Jones Golf Trail Championship, where he made the cut and finished T-42. The Web.com Tour, also known as the Korn Ferry Tour, is the developmental tour for the PGA Tour.

“I just gained a lot of confidence playing mini-tour events,” Bhatia told Golf Digest. “I won my first one and that was a huge stepping stone for me. Then I made my first cut, finished top-10, which was great. Just doing that over the course of a year was really big for me, and I just know that I’m progressing every time I’m teeing it up.”

On March 20, 2019, the PGA Tour tweeted a video of Bhatia playing a shot. “What were you doing at age 17? Akshay Bhatia is making his PGA TOUR debut,” the post said.

Late summer last year, things started looking better for the North Carolina teen. His foray into professional golf came right after he competed in the 2019 Walker Cup. He was the first high school player to make the Walker Cup team for the United States. The Walker Cup is a golf trophy contested in odd-numbered years by leading amateur golfers in two teams: United States, and Great Britain and Ireland.

That was followed by his professional debut at the Sanderson Farms Championship in Jackson, Mississippi in September 2020. “That feeling when the time has officially come,” Bhatia wrote then on Instagram. “A special thanks to everyone on my team that has helped me get here this week, especially my family for supporting me all the way. Let’s do this!”

After his debut, he played the Safeway Open, where he won his first top-10 on the PGA Tour, a T-9. Before his pro debut, Bhatia won the ST 11 @ Old South Golf in Hilton Head, South Carolina, an event on the Swing Thought Tour, by three strokes. The Swing Thought Tour is the oldest developmental golf tour in the U.S.

Although Bhatia has just begun his professional career, Golf Digest says “he has already earned a net worth of $200,000 from his short professional career.” He didn’t “make a penny” in his first six events in the 2019/20 season, the Digest notes, and adds: “In the on-going season, Akshay has played in four events in which he has made cuts in three games and finished in the top 10 in one event.”

This March, Bhatia finished in the top 40 of qualifying for Canada’s Mackenzie Tour “to earn conditional status, but the start of that circuit’s season was postponed and a restart date has yet to be announced,” the Digest says. He also was scheduled to play in the Hero Indian Open in March on a sponsor’s invite before the European Tour cancelled that tournament.

Bhatia was born on Jan. 31, 2002, in Northridge, California, to Sonny and Renu Bhatia. His interest in golf started with his sister, Rhea, who is about four years older than him. Bhatia was a child when he first saw his sister play. “He wanted to play really badly at first but was too young,” his father Sonny Bhatia told the Raleigh News and Observer. He advised his son to “watch his sister,” he told the paper. “Your time will come,” he told his son at the time. Rhea Bhatia, the 2015 4A Regional champion as a high schooler, played two years on the women’s team at Queens University of Charlotte. The family moved from California to North Carolina when Bhatia was 9.

Bhatia’s appearance can be deceptive. The lanky, tall teen, with his trendy glasses (he cannot put the contacts in, Bhatia told Walter magazine), has a powerful swing. Golf Digest says Bhatia’s “swing speed teetering on 125 mph” is about 5 mph more than the “the high 120s” which “is among the fastest on the PGA Tour.” Bhatia stands six feet tall and 130 lbs.

And it is not just his swing that makes Bhatia a golf phenomenon. His entry into the professional league is rare as well. Bhatia turned down college for a chance to live his dream, a discussion he first had with his father in eighth grade. Bhatia, who has been homeschooled since eighth grade, graduated in 2018.

Golf Digest says, Bhatia’s decision to turn professional at age 17 was “a controversial choice, as virtually every great American player spent at least some time on a college campus.” Jordan Spieth played a year-plus at Texas, Justin Thomas did two at Alabama, Matt Wolff did two at Oklahoma State, Collin Morikawa stayed a full four at Cal-Berkeley. “And despite a decorated junior career that saw him emerge as the consensus top junior in the country, many felt Bhatia would be well-served by the increasingly competitive college game,” the Digest says.

When Bhatia was in eighth grade, his father noticed that all his son wanted to do was to concentrate on playing golf, practicing golf, competing in golf events. “You know what – lets just not go to college. Let’s not do it,” Sonny told his son. Bhatia quickly agreed with the move. “I’m an 8th grader,” he said. “Of course, I’m going to say no to school,” he said in an interview with pgatour.com. “I have never liked school,” he explained. “I’ve never been very smart going in, sitting in a classroom — and I have the worst attention span when it comes to it. I just love being outside. I love playing golf and I love competing.”

That said, he did visit a few colleges, and spoke to a few college coaches, including at Oklahoma State. He told pgstour.com that if he had gone to college, it would’ve been either in Stillwater, Oklahoma, or in Palo Alto, California at Stanford. “I’m not saying college is a bad thing, because so many great players have come out strong,” he said. “Playing four years at college and trying to win a national champion is probably one of the best feelings and one of the greatest things.”

In an interview with pgatour.com, Bhatia recalled telling his father prior to the Junior PGA tournament that he had “just never played good enough to win a big event… I don’t think I’m ready to be good enough.” But he adds: “That week, it changed my whole outlook on my game.” Several amateur wins followed including two silver medals at the 2018 Summer Youth Olympics playing the Junior Ryder Cup. At the time, he ranked in the top 10 in the Junior World Ranking.

With a great game, a powerful swing, talent,  the right attitude and age on his side Bhatia is lighting up the fairway and creating a stir in the PGA circuit.