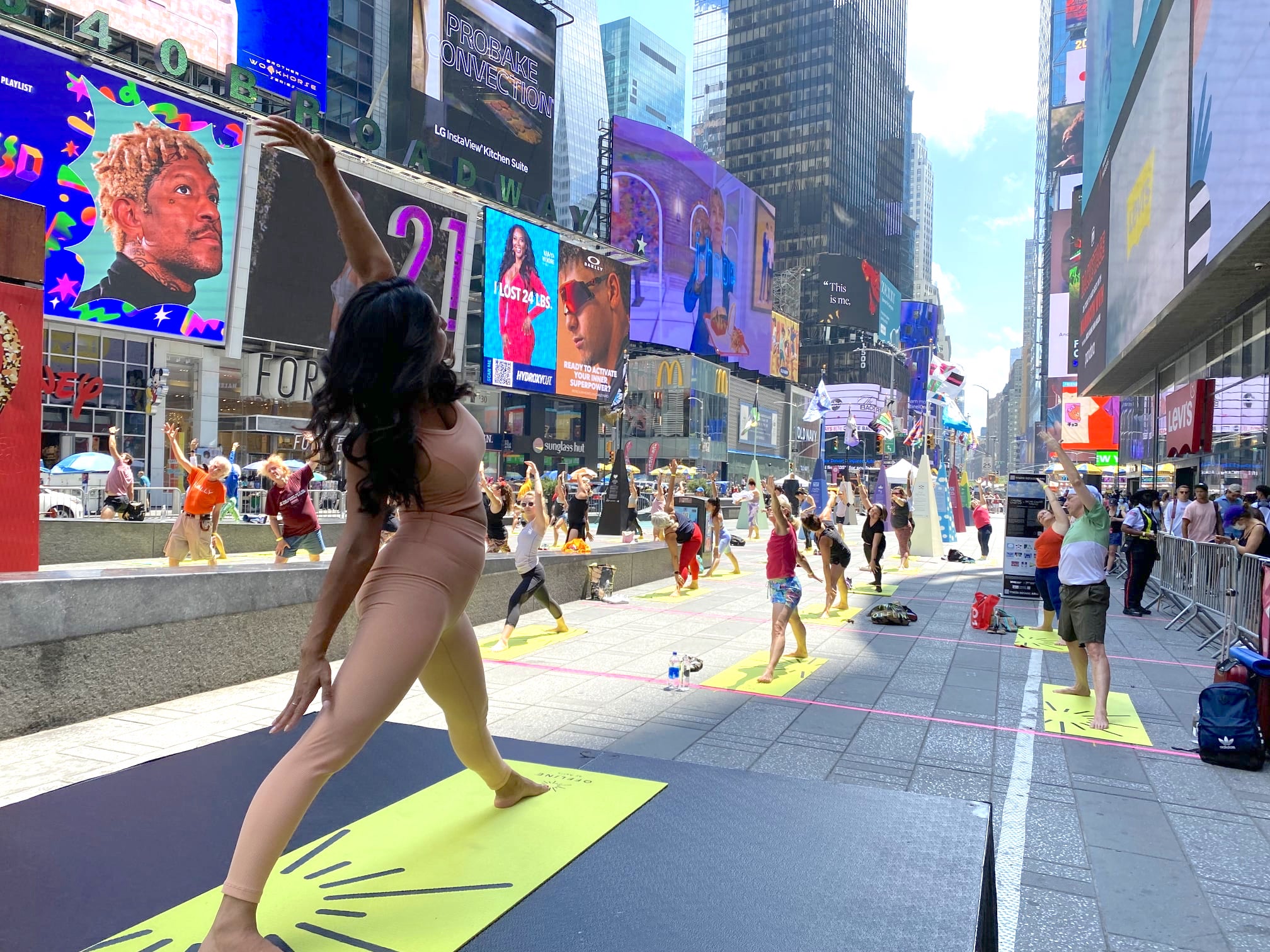 Yoga enthusiasts across the country rolled out their mats and braved the heat as they stretched, twisted, and turned to perform yoga and sun salutations at various venues across the country to commemorate the 7th International Day of Yoga. As the summer solstice fell on Monday, June 21, the events were held a day earlier. Most of the celebrations this year were in-person, due to the lifting of restrictions related to the COVID-19 pandemic. Some events were hybrid — in-person and virtual.

The celebrations coincided with the International Day of Yoga, proposed by Indian Prime Minister Narendra Modi in 2015. This year’s theme — as designate by the United Nations — was “Yoga for well-being,” with an emphasis on the holistic health of every person.” The Day will be marked at a time when the COVID-19 pandemic continues to upend lives and livelihoods of people globally.,” the UN says on its website announcing the theme.

The message of yoga in promoting humanity’s physical and mental well-being has never been more relevant. A growing trend of people worldwide embracing yoga to stay healthy and rejuvenated and to fight social isolation and depression has been witnessed during the pandemic.

In New York’s iconic Times Square, the day-long yoga festival with the theme of ‘Solstice in Times Square 2021’ was attended by more than 3,000 people. The Consulate General of India in New York partnered with the Times Square Alliance to host the celebrations.

“After going virtual in 2020, we’re grateful to once more have had yogis unrolling their mats in person for the 19th annual Solstice in Times Square 2021, with seven free yoga classes throughout the day from fantastic teachers including Tim Tompkins, Douglass Stewart, Ruchika Lal (presented by the Consulate General of India, New York), Phyllicia Bonanno (presented OFFLINE by Aerie), Koya Webb, Crystal McCreary Yoga, and Alex Silver-Fagan,” the Times Square Alliance said on its Facebook page.

In keeping with this year’s global theme – Yoga for Wellness – the Times Square event showcased holistic health, Ayurvedic, and nature-based wellness products from Tribes India (TRIFED) and other Indian companies.

Across the Hudson in New Jersey, over 200 participants gathered at the Liberty State Park on June 20 to mark the occasion. The community-led event was anchored by the Federation of Indian Associations.. over 120 joined online. Consul General of India in New York, Randhir Jaiswal, who briefly attended the event with Deputy Consul General Shatrughan Sinha, appreciated and encouraged the participants. Celebrity yoga instructor, Reiki healer, and health coach Thara Natalie gave yoga lessons for all ages. She also shared health tips during the one-hour session. Singer and songwriter Jay Sean was the guest of honor while former Miss America and actress Nina Davuluri, also a yoga practitioner, compared the event.

In Washington. D.C., the Embassy of India observed the day with an in-person and online event. Welcoming the participants, Ambassador Taranjit Singh Sandhu stressed yoga’s potential to provide both health and happiness by improving the physical and mental well–being of people, especially given the impact of the global pandemic. He also noted that India and the United States have stood shoulder to shoulder with each other in fighting the pandemic.

In Atlanta, Georgia, the American Academy of Yoga and Meditation, with the support of the Consulate General of India in Atlanta, is organizing International YogaCon USA 2021 all this month.

Similarly, the Consulate General of India in Houston held Yoga events at Buffalo Bayou Park, Houston, and River Walk in partnership with the City of San Antonio. In San Francisco, the consulate is holding Yoga Day celebrations at the Palace of Fine Arts on June 25.

The BAPS hosted a yoga event at its temple in Los Angeles on June 20, Over 60 participants practiced various poses such as Bhujangasana and Marjariasana and breathing techniques like Kapalabhati Pranayama and Bhastrika Pranayama amidst the temple’s peaceful ambiance and breathtaking architecture. The session concluded with the participants joining together to offer special prayers for all those lost due to the COVID-19 pandemic, their grieving family and friends, and the countries and communities still facing high rates of infections and deaths throughout the world.

In Chicago, the Consulate General of India collaborated with Friends of Yoga to host an event at Grant Park in Downtown Chicago on June 19.

Some took to social media to share their photos performing yoga on the occasion. “I’m so grateful for the gift of yoga,” tweeted former Hawaii Congresswoman Tulsi Gabbard. “It has impacted my life in the most profound way. I’ve been practicing yoga asanas and yoga meditation for as long as I can remember, and it remains central to my daily practice. It is so much more than a form of physical exercise. It is a lifestyle, a consciousness and worldview that can inspire us to respect and care for one another and our planet.”