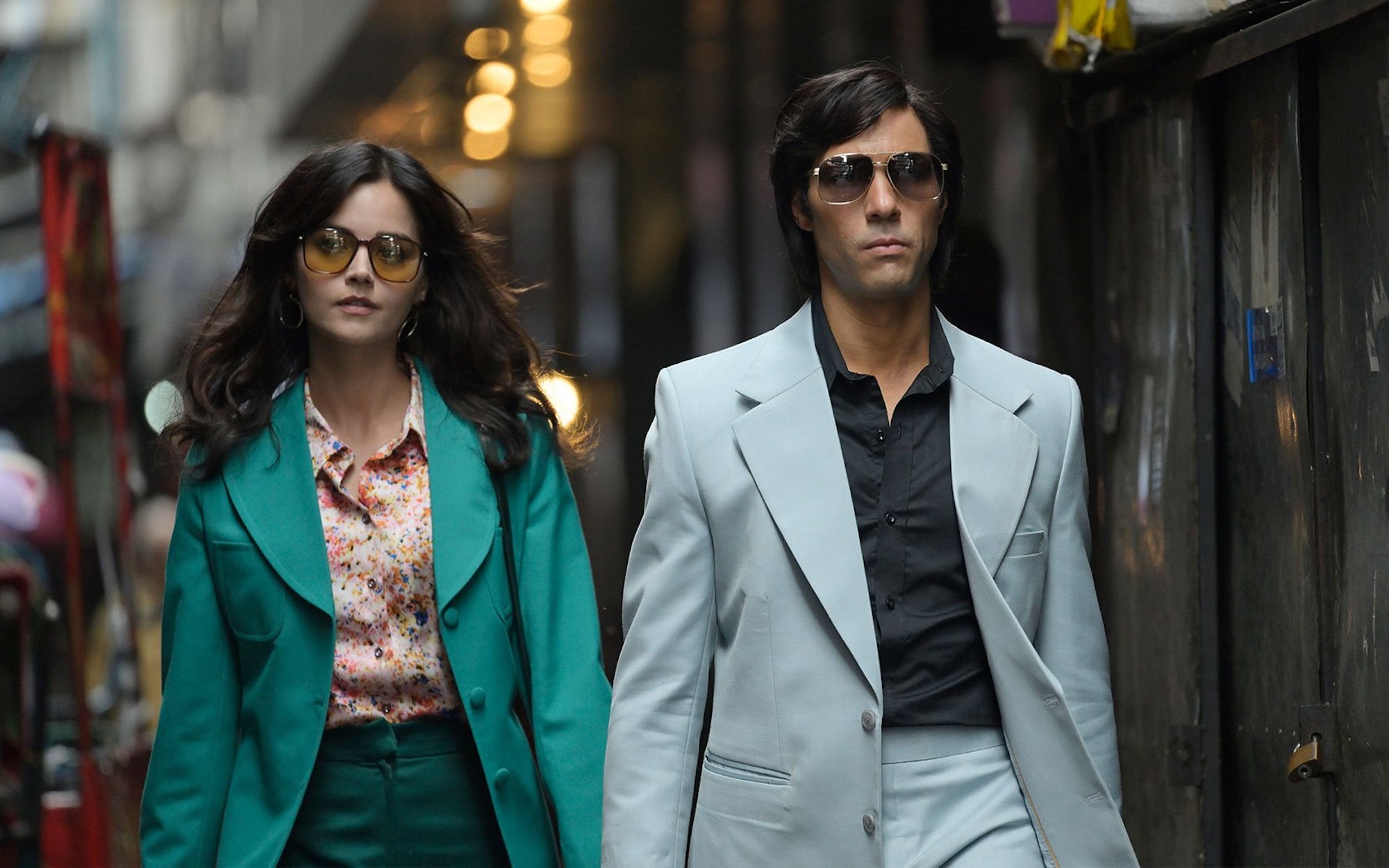 Chances are, you spotted “The Serpent,” a new Netflix thriller, on your surfing frenzy over the last few weekends. The crime story is based on the real life of conman and serial killer Charles Sobhraj, who carried out a crime spree across the “trail” of Asia in the 1970s. And with a stellar cast – including lead actor and Golden Globe winner, Tahar Rahim (“The Mauritanian”) – it is well worth a viewing.

The eight-episode series, produced jointly by BBC One and Netflix, tells the story of Sobhraj (played with quiet menace by Rahim), who preyed on Western tourists on the hippie trail in the mid 1970s. Sobhraj and his girlfriend, Marie-Andrée Leclerc, pose as gem dealers, and commit a bunch of crimes together, before eventually becoming chief suspects in a series of murders of Western travelers.

Born Hotchand Bhawnani Gurumukh Charles Sobhraj to Vietnamese mother and Indian father, he committed at least a dozen murders between 1975 and 1976, and was known as ‘The Serpent’ for his knack for dodging charges and capture. By 1976 he was eventually convicted and sentenced to over 20 years in prison. On his release in 1997, he moved back to Paris.

“The Serpent,” with its spine-chilling depiction of murder is sure to give you a thrilling tide through the mind of a psychopath. One can definitely binge watch (guilty as charged) as a debonair Sobhraj leaves a trail of destruction in his wake, while a junior diplomat at the Dutch Embassy in Bangkok.

Herman Knippenberg (Billy Howle) doggedly follows his trail obsessed with catching ‘the serpent’.  Knippenberg can’t let go of a plea from the family of a missing couple who implore him to find them. Knippenberg’s boss advises him that solving mysteries isn’t his job, but something about this request bores into his brain, and he also realizes that the local cops will do nothing.

Though the attempt not to glamorize Sobhraj is indeed laudable, it makes it difficult to see the complete sway he had over people without any sign of his legendary wit, charm and silver tongue. But in this series, Sobhraj remains a cipher — a chilling socio-psychopath that people should logically turn away from rather than actively seek out.

Opening at a swinging party in November 1975 at Kanit House in Bangkok, we encounter Sobhraj, who introduces himself to the unsuspecting as a charming gem dealer Alain Gautier. “The Serpent” then goes back in time to a jewelry robbery in Delhi which got Sobhraj arrested, his marriage, the birth of his daughter and the seduction of his partner in crime, Marie-Andrée Leclerc (Jenna Coleman).  The show then returns to the events at the party and introduces key players including Ajay, (Amesh Edireweera), Sobhraj’s second in command, his neighbors Nadine (Mathilde Warnier) and Remi (Grégoire Isvarine), who ultimately help Knippenberg build a case against Sobhraj.

Point to note: I did get quite a case of whiplash from the constant back and forth in time….but if you hang on….the story gets good.

In the next few episodes, we learn the backstories of Sobhraj’s victims, including the Dutch couple Helena (Ellie de Lange) and Willem (Armand Rosbak) who were drugged and burnt alive, and were the reason Knippenberg got hot on Sobhraj’s tail. We also see Vitali (Kaleli Hakim), wanna-be nun Teresa (Alice Englert) and Connie-Jo (Dasha Nekrasova). There is also Dominique (Fabien Frankel), another hapless traveler that Sobhraj keeps ill enough to help around the house — as he tells Marie- Andrée, “Keep him a little sick and he will do anything for you.” Dominique was one of the rare victims who managed to get away.

On Knippenberg’s side, there is his wife, multilingual Angela (Ellie Bamber) who helps him with his investigation. Angela is not happy with the passive role he has been given, and with Knippenberg’s boss, the long-suffering Ambassador van Dongen (William Brand) and his secretary, Lawana (Apasiri Kulthanan) hogging the limelight. And then there’s Paul Siemons (Tim McInnerny), the Belgian Foreign Service official who would prefer to deal with Sobhraj with a gun.

Ultimately, Knippenberg finds his lost hikers, and although their story doesn’t have a pleasant ending their misfortune is only the beginning of his hunt!

While Sobhraj’s story made headlines at the time, he is not as well known to the younger set. The series’ writers do a fine job keeping the mystery alive for those unfamiliar with the case. While the dialogues are imagined, and some of the names changed, the series draws heavily on Richard Neville and Julie Clarke’s 1980 book, “The Life and Crimes of Charles Sobhraj.”

Some things do not make sense like why Dominique didn’t go for help to the embassy rather than travel on a false visa. And when gathering evidence against Sobhraj, why didn’t Knippenberg try and convince Dominique to give evidence? Maybe watching too many crime shows makes us all armchair investigators!

Rahim and Coleman exude a leonine elegance as Sobhraj and Leclerc, and Howle is solid as their adversary, especially since for most of the series they’re barely aware of who he is. With slick costumes, gorgeous locales and a bright, motivated cast, “The Serpent” looks the part of a sleek true-crime thriller. The gem of the series is Rahim, who with his natural good looks internalizes his reptilian alias to perfection, meticulously weighing his words, actions, gestures while approaching these unsuspecting travelers, most of them still in their 20s. With Sobhraj’s signature magnetism, Rahim eschews the part with brilliance, shedding his skin and revealing snippets of the real Sobhraj, when surrounded by his “true friends.” To every other person he meets, he pronounces them a “friend,” with a practiced, mechanical warmth.

The actor turns on his charm during scenes of violence and terror, fully embracing the role of an unfathomably cruel monster. At one point, Sobhraj beats a woman in broad daylight, in the middle of a crowd, but the onlookers pay no attention, assuming their genteel neighbor is just horsing around.  Through him we get to meet the enigmatic and elusive Sobhraj, who although labeled a serial killer, if the series is to be believed, was more opportunistic in his killings. While he tries to reason away his murderous ways, telling Marie, “From the age of 15, I was denied everything,” he seems to kill because it is the easiest way to get what he wants, be it money or false passports. When Sobhraj tells Ajay in Kathmandu to find a cheaper hotel, it reveals Sobhraj to be a racist apart from being a stone-cold psychopath.

Rahim’s portrayal of Sobhraj as a cautionary tale — do not trust the charming, helpful stranger in a foreign country is bang-on. Everyone’s acting, from the leads to the supporting cast, is spot on. As for the Asian characters besides Sobhraj’s Indian accomplice Ajay Chowdhury (Amesh Edireweera) who is painted as your basic, seedy sidekick . . . there aren’t any which, given that the story is set in Thailand about a South/Southeast Asian serial killer, should tell you something about whose world view is worth exploring here and who is deemed worthy enough to be part of the scenery.

However, the look, feel and the sounds of hippie trail of the ‘70s are recreated perfectly. That colorful bus from London to Nepal with cinematographically picturesque stops in Istanbul, Kabul, Tehran and Delhi are a sight for sore eyes. “The Serpent” builds real-life serial murderer and con artist Charles Sobhraj’s world with a shrewdness the attentive viewer can’t help but appreciate.

And even though it’s an entirely formulaic cat-and-mouse mystery thriller, and fails to maintain the thrill of its drama through its eight-episode run. But as much as “The Serpent” benefits from its shocking real-life story, it also falls victim to it. The first five installments make for a gripping crime series, but the last three episodes lose their momentum so significantly in part because the real hunt for Sobhraj slowed to a crawl. The final half-hour jumps through several decades and developments (and unfortunate aging makeup) in a rushed, anticlimactic conclusion, even if it remains true to the story.

Fewer episodes, more creative license and fewer twists would have helped condense it into a consistently stirring series, with some bite. But before it loses steam, “The Serpent” is one wild ride. That said, this retelling seems to have everything that the average viewer with their endless appetite for serial killer dramas could possibly want — travel, seduction, danger, and enough beauty to satisfy the soul.

“The Serpent” is currently streaming on Netflix.