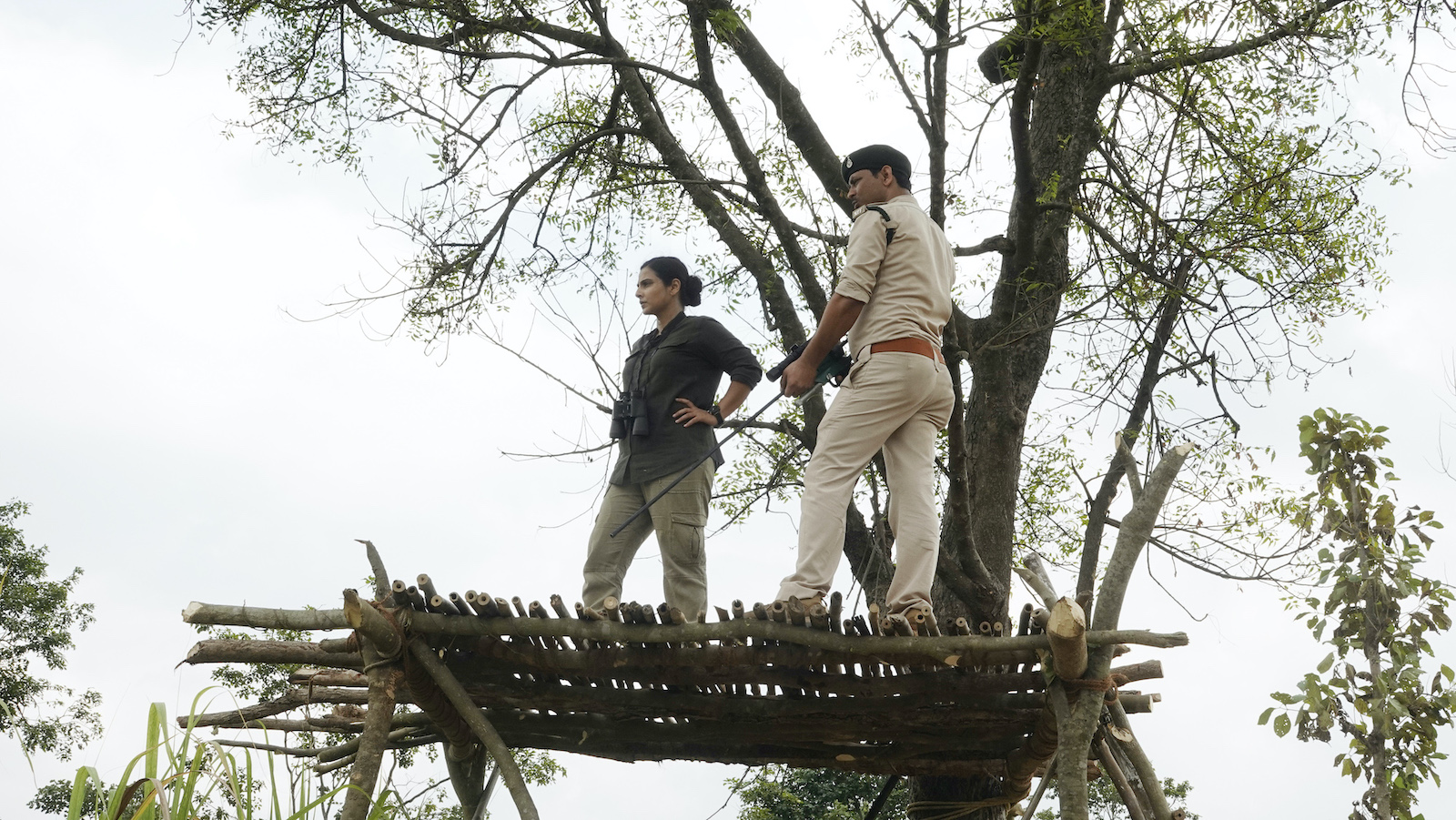 On a brief vacation at the beach, I decided to check out the latest Bollywood offering “Sherni.” And what I found was a National Geographicesque film on the importance of forest conservation and the disastrous effect of human greed. It is a great departure from a regular Bollywood film, and that’s what sets “Sherni” apart.

With the man-animal conflict increasing in India, as more and more forest land is being encroached on for residential and commercial purposes, surprisingly, very few films have dealt with this burning issue. So, major props to “Newton” director Amit Masurkar for taking up this lofty initiative with “Sherni.”

The film revolves around Vidya Vincent (Vidya Balan), a straight-laced, committed forest officer, who is newly transferred into tiger country – the forests of Bijaspur. Her husband Pawan (Mukul Chadda) is away in Mumbai while she resides alone in a residence allotted by the Forest Department. She is not happy with the promotions or lack thereof and salary hikes that she has received in the last nine years and wants to quit. But Pawan advises against doing so as his corporate job is on shaky grounds. In many ways, Vincent’s world seems isolated much like the tigress’s — a lone woman in a male-dominated department. Yet, her colleagues and peers trying to undermine her are the least of her worries. She soon realizes that she’s stepped into a minefield.

One day, Vincent learns that a tiger was spotted close to the village. A few days later, the tiger kills a villager, leading to anger among the locals. Through the camera traps, the forest officers learn that it’s a tigress, named T12, who is the perpetrator. For the villagers, tigers passing through their fields is a norm, as their village is flanked by forests on both sides. In their own words, the tigers often pass by without even glancing in their direction, but this new development soon spreads fear, threatening their lives and livelihoods.

Elections are also around the corner and two warring, rival, political camps stoke the fires, turning it into a burning election issue. Sitting MLA, G K Singh (Amar Singh Parihar), who wants to retain his throne, promises the villagers that he’ll ensure the tigress and her two cute cubs are killed and thus provide respite to them – becoming their hero and savior. On the other hand, P K Singh (Satyakam Anand) is an ex-MLA who wants to get back to power. He provokes people against G K Singh. And amid their tussle, villages continue to fall prey to the man-eating tigress.

This little village is the epicenter in which conservation, environment, politics, are brewing, and the flashpoints are the deaths of those villagers who are forced to take their cattle into tiger country because their grazing land has been gobbled by the powerful mining corporations.

To fulfill his promise, G K Singh invites Ranjan Rajhans aka Pintu (Sharat Saxena), a self-proclaimed conservationist but who is in reality a vicious hunter. He wants to kill T12 to add another notch to his impressive kill belt. Vincent, however, is not in favor of killing the animal. For her, locating and capturing T12 alive is of utmost importance but this means navigating through the sentiments of the locals, the pressure built by the politicians, her boss Bansal’s (Brijendra Kalra) attitude (he just wants to play ostrich, wishing the problem to disappear into the woods) and of course, hunter Pintu, who is doggedly hunting the tigress.

The new lady forest officer is now the cynosure of all eyes. Her only support seems to comes from Hassan Noorani (Vijay Raaz), who is a zoology professor in a nearby college, some of the local villagers like Jyoti (Sampa Mandal), a member of the village committee, and Nangia sir (Neeraj Kabi), the Forest Department head and her mentor. Vincent advises the villagers to stay away from the forest. Using camera traps and tracking the pug marks, she hopes to find T12, tranquilize her and then release her in the nearby national park. Time is running out and it’s important she succeeds in her endeavor before Pintu hunts the tigress down and more innocent villagers are killed.

What ensues is a race against time and adversaries. Will Vincent be able to restore balance in this tussle between man versus wild? You will have to see for yourself.

Masurkar weaves an intricate and complex narrative with rich visuals, as he dives deep into this man versus animal offering. The screenplay by Aastha Tiku is meticulously detailed, giving an insight into not just the protagonist’s mind but also the workings of a British relic – the bureaucratic forest department and how the village and the forest are entwined in their existence. A sentiment summed up admirably by the line “Sher hain to jungle hai, jungle hain to baarish hain, baarish hain to paani hain aur paani hai toh hum hain,” by a ‘Forest Friend,’ trained by Hassan Noorani to spread the word of conservatism.

The cinematography (Rakesh Haridas) and sound design (Anish John) is stupendous. The camera rivals that of any nature documentary, literally romancing the dense, lush, sublime jungle – dappled sunshine, gurgling streams, buzzing of insects, the rustling of leaves, distinct sounds of birds and animals, and the majestic heart-stopping beauty of the tigress and her adorable cubs – the forest seems to come alive in “ Sherni.” And one simply can’t walk away without falling in love with the forest first.

The background score by Benedict/Taylor, Naren Chandavarkar adds to the air of mystery and is minimal and effective, while the only song in the film “Bandar Baant” (music by Bandish Project, lyrics by Hussain Haidry) strikes the right note. Costumes by Manoshi Nath, Rushi Sharma, and Bhagyashree Rajurkar are non-glamorous, in keeping with the demand of the script.

As far as the cast goes, Balan seems the perfect pick for this role. She gets into the skin of her character and leaves us with a remarkable, understated yet powerful performance, as she exudes the quiet determination, passion, and grit of her character. Devoid of any dramatic overtones but with eyes that speak volumes, it is a joy to watch A-list actress Balan subtly battle sexism and bias not just at work, but also at times at home.

‘The Big Day – Season 2’ has All Elements of Magical Weddings, But Lacks the Magic

Balan gets in some smart empowering quips about being a professional first, not just a woman – with not just a blustery local who tries to shout her down, but also her spouse who thoughtlessly shows up unexpectedly, armed with mum, and mum-in-law (Ila Arun in a delightful cameo), expecting her to drop all work-related duties and become the subservient biwi and bahu, who cooks, cleans and satisfies her man in the bedroom. As a local teacher who is her ally, Raaz livens up the scene in the only way he can – with a subtle yet stellar performance. Brijendra Kala, as the area in charge, a typical babu who wants to be everyone’s friend and no one’s enemy without actually lifting a finger, is a hoot. Neeraj Kabi has a great screen presence. In his brief role of an experienced yet hypocritical forest officer, who says one thing but means another, leaves an impact. And Sharat Saxena is also very good as a passionate hunter who can go to any lengths to get his prey. Suma Mukundan (Vidya’s mother) and Nidhi Diwan (Reshma; Hassan’s wife) don’t get much scope to flex their acting prowess. Sampa Mandal (as the feisty villager Jyoti) leaves a mark in her brief role.

The understated humor quotient also works well. Two scenes that stand out in the first hour are when G K Singh storms an awareness program by Hassan Noorani (Vijay Raaz), and P.K. Singh chasing Vidya’s senior Bansal (Brijendra Kala) in his office. The latter is quite amusing and novel and was well appreciated as a means to break up the heavy drama.

However, if we were to nitpick on the misses, there’s a bit too much stuffed into the film — local activism, raising awareness about the importance of preserving the land, patriarchal power games, women negotiating age-old customs of duty, and new ones of wanting to excel at their jobs, bureaucracy, etc. Also, Sherni begins on a rather dry note. The opening credits are shown on a black screen with no music, making it clear that the film is intended for niche audiences – leaving the majority of Bollywood masala movie fans out in the cold. Not a wise move if spreading this important message to the masses is a goal.

Unfortunately, Balan’s character is not well fleshed out either. The promos seem to draw parallels between her character and that of the tigress. However, Vidya Vincent doesn’t roar when she witnesses injustice happening around. There are scenes where she’s just a silent bystander, thus diluting the effect of the parallels between both shernis.

The film also ends on an unjustified and drab note. In the end, one gets hopeful that Vincent will take matters into her own hands. But the makers don’t explore this well and the character loses some of its luster. The slow and documentary-style narrative, longer runtime than necessary, and a bewildering climax that leaves a lot to be desired do dampen the impact.

As to whether Bollywood and its audience are ready for a film about ecology and the environment remains to be seen. “Sherni,” a strange beast of a movie, is definitely a one-time look-see and makes for an intense and intriguing film.

Anu Ghosh immigrated to the U.S. from India in 1999. Back in India, she was a journalist for the Times of India in Pune for 8years and a graduate from the Symbiosis Institute of Journalism and Communication. In the U.S., she obtained her Master’s and PhD. in Communications from The Ohio State University. Go Buckeyes! She has been involved in education for the last 15years, as a professor at Oglethorpe University and then Georgia State University. She currently teaches Special Education at OakGrove Elementary. She is also a mom to two precocious girls ages 11 and 6.

‘Mimi’: A Situational Comedy About Surrogacy That Falls Into the Emotional Bollywood Trap

‘Skater Girl’: An Inspiring Tale of a Dalit Girl That Will Melt Even the Coldest Heart