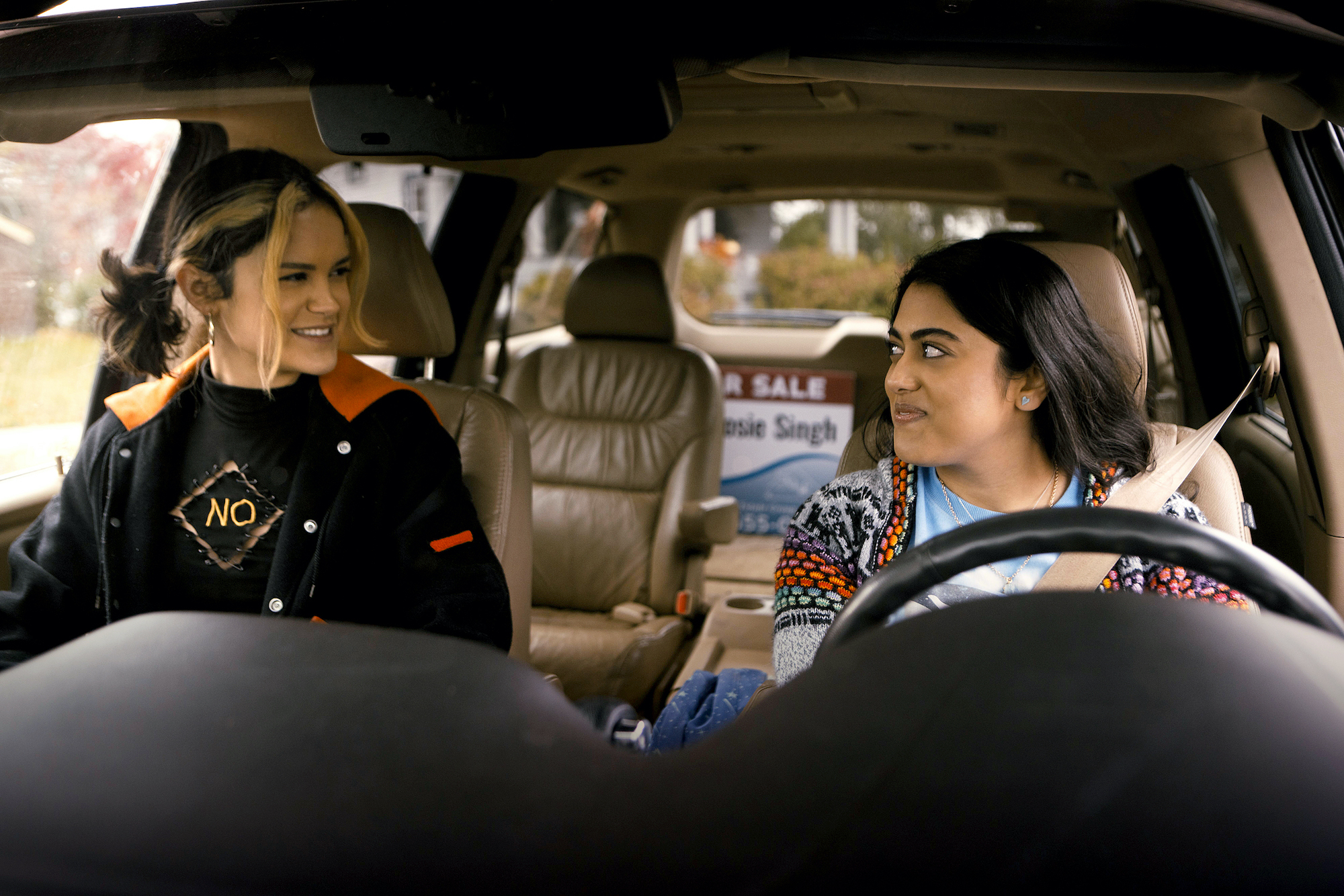 Seat at the Table? How I Struggled to Eat My Tiramisu at the World’s Largest Starbucks

The latest in raunchy teen girls-behaving-badly all-night-long road-trip high school comedy to hit the Hulu Originals repertoire is “Plan B,” starring Indian American actress Kuhu Verma and Victoria Moroles. The formulaic premise is simple but engaging. Two polar opposite besties, united in their clever banter and lack of high-school popularity, embark on a road trip across South Dakota.

Verma plays Sunny, a smart and sex-obsessed teen who after crushing hard on popular jock Hunter, has a regrettable sexual encounter with nerdy Christian classmate Kyle. Factor in a hiccup with the condom, and Sunny realizes that she needs to take the morning-after pill — also known by the brand name Plan B — to ensure that she isn’t pregnant after the short and not-wholly-satisfying encounter.

Soon Sunny and childhood bestie Lupe (Moroles) are racing to find emergency contraception in a town where “conscience clause” legislation allows overzealous pharmacists to deny medication if it goes against their beliefs. With the clock ticking, and realizing that she won’t be able to find the care she needs in her town, Sunny and Lupe set out for the nearest Planned Parenthood in Sunny’s mom’s minivan (of course, mom is conveniently out of town); driving across the state, to find the care she needs.

Needless to say, as all movies in this genre go, their journey, just like the party the night before, does not go as expected. This edgy, sweet, frank and goofy comedy, directed by “Dead To Me” actress Natalie Morales, and scripted by collaborators Prathi Srinivasan and Joshua Levy, who have worked on projects including the YouTube series Bollyweird (and who both worked on iZombie), is a heartwarming story about the importance of your best friends, the fact that people often love you more than you fear they will, and the concrete consequences of public policy debates that often don’t even include the people who will navigate those consequences. And with stellar performances by Verma and Morales, I sat up and took notice.

Who is Kuhu Verma?

For those (like me), who are not familiar with Verma or her works, I decided to do a little research. What I found was that Verma is a talented singer and off-Broadway performer, who got her film break in 2017’s Oscar-nominated rom-com “The Big Sick,” where she played one of many potential brides with whom Kumail Nanjiani’s family sets him up (note to self… rewatch that).

Talking to MTV about her breakout lead role, the New York-based Verma says, “I think a lot of the previous roles that I had done were characters that were coming from a place of shame and coming from a place of deep self- deprecation and self-misunderstanding and not really standing their ground in what they believe in and what they think,” adding, “With Sunny, it was “refreshing” that the way she sees herself is with great respect and ownership. She knows what she wants.”

Verma told NBC that after she read the script, she came to a somewhat awkward realization about her own adolescence. “I started remembering my high school self and how cringey I was for so much of it,” said Verma, 25. In particular, she recalled just how painful crushes, dating and romantic rejection can be for high schoolers, especially those who grew up in immigrant families like hers.

She told MTV that in order to prepare for her breakout role, she returned to her childhood home in Lansdale, Pennsylvania, and cracked open the journals she filled in middle school and high school. She wanted to “[go] back to that mindset of being a misunderstood Indian girl,” because that’s Sunny — and countless other teenagers. It’s a mentality you can grow out of over time, but it’s difficult to forget that ache.

“Do you remember what this was like, to be this desperate for sexual attention and not really knowing how to navigate that? And feeling like everyone else is seeing you as this nerd, and you yourself are like, I don’t see myself that way, I think I’m a cool bitch,” Verma said. “A lot of that was really resonating with me because I was simply like, oh wow, I have to do this for the middle-school version of myself. I have to do it for the younger Indian girls who don’t know how to navigate their sexualities.”

Portraying a character who is direct about her sexuality also led Verma to reflect on the mixed messages teens often get about dating and intimacy. “The film allowed me to let go of a lot of the sexual shame that I think a lot of people of color, and women of color specifically, ended up going through as you’re growing up,” she said to NBC.

As Vanity Fair note, “we are in a time now where more films are getting made about teenagers and adult women who decide not to carry unplanned pregnancies.” and films like “Plan B” “are taking the conversation about how certain states in the U.S. make it almost impossible to receive reproductive health care forward.”

“Plan B’s” most memorable and aha moment takes place at the end in front of an abandoned Planned Parenthood office. It’s Sunny’s last shot at getting the pill she needs to live the life that she wants at her age. Her future feels out of her control.

“It was tremendously healing for me,” she said to MTV about filming the emotional scene, which she says helped her “have this universal relief as a woman of color and just cry about the frustration of the kind of obstacles we have to go through in this country. It’s like that moment I think a lot of people of color have in their lives, where you don’t really have the language all the time to reckon with why you feel different,” she adds. “Suddenly, everything kind of spills over. I hope people can watch it and feel a sense of familiarity and a sense of ‘Oh, I’m not the only one that’s going through this, and I’m not the only one that’s having a hard time in this body.’”

Verma, talking to NBC said that while she did relate to Sunny in many ways, she is grateful that her parents were more open about things like dating while she was in high school. Like many South Asian parents of their generation, Verma’s parents originally avoided discussing sex and relationships while she was growing up. “The discussion was more one- liner. They said, ‘You know you’re not doing this until you’re in college,’” she said. “That was that.”

But when she began dating in high school anyway, her parents came around. “I dealt with a lot of similar anxieties as Sunny, so it was really nice to be able to actually address them,” she said. While much of the media coverage of the film has focused on the deep friendship between a South Asian teen and a Latina teen as a central part of the plot, Verma appreciates that Sunny is relatable across races and ethnicities. “One of my favorite parts of the story was that she didn’t necessarily have to be Indian. She could have been from any culture with similar kinds of pressures,” Verma said to NBC. “That felt so freeing, because I felt like I was there because I could genuinely bring something new and exciting to this part.” Hopefully, new found fans of Verma keep getting to see her.

“Plan B” is streaming on Hulu.

Whither U.S.-India Relations? A Historic Look at Ties Presaging the Biden Administration