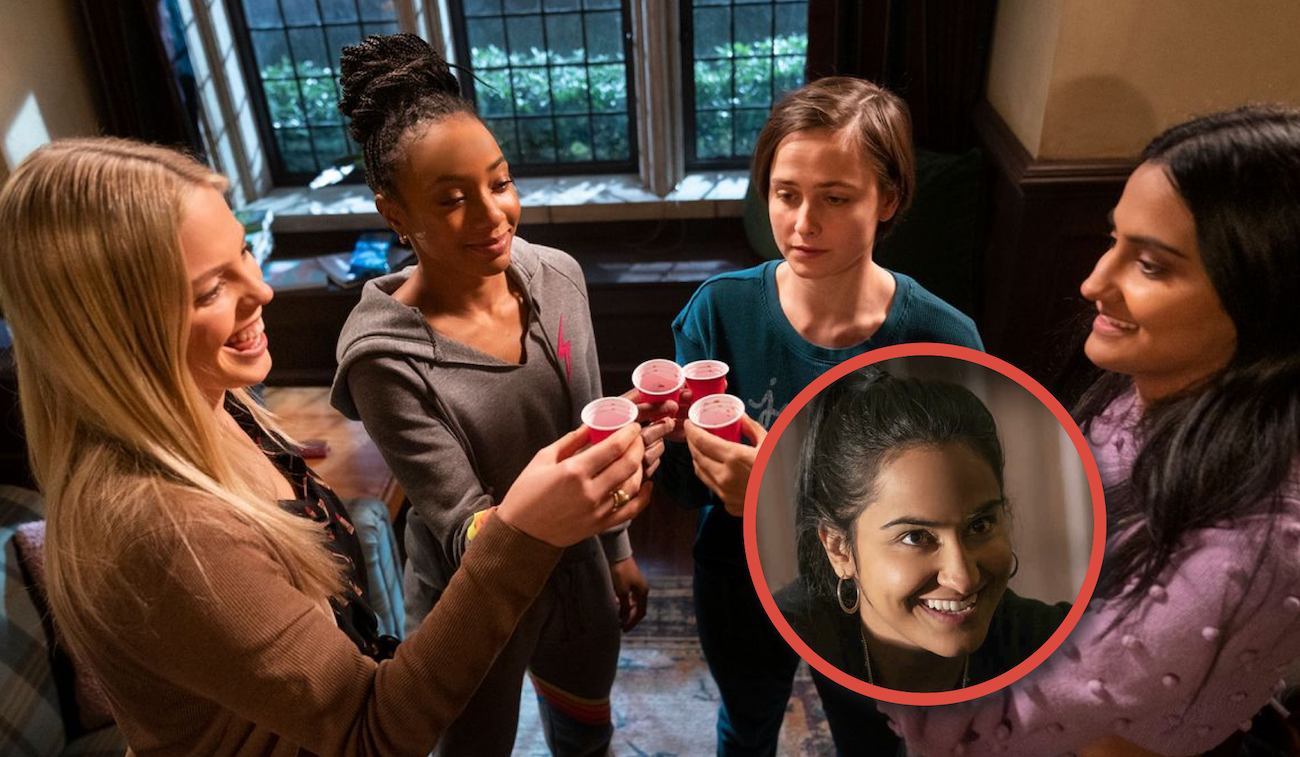 Making it Our Own: An Indian American Thanksgiving With Tandoori Turkey and Sweet Potato Poriyal

Mindy Kaling’s “The Sex Life of College Girls,” a teen college comedy, premiered on HBO Max last week. Co-created by Kaling and “Brooklyn Nine-Nine” writer Justin Noble, the series chronicles the lives of four roommates as they embark on their freshman year at Essex College, a fictional institution set in a New England town. These young ladies, who are away from home for the first time in their lives, are trying to figure themselves out mentally, emotionally, and sexually. The series premiered on Nov. 18 with two episodes, with new episodes arriving each week after that.

We are introduced to Bela Malhotra, played by Amrit Kaur, a New Jersey native as eager to break into comedy as she is to shed the conservative constraints of her Desi upbringing; Leighton Murray (Regina Rapp), a closeted uptown snob; Kimberly (Pauline Chalamet) a scholarship student from a small town in Arizona; and Whitney (Alyah Chanelle Scott), a college athlete whose U.S. Senator mom overshadows her arrival on campus.

Kaling is no stranger to creating television shows that highlight multifaceted minority stories like in “Never Have I Ever,” where she launched the series’ breakout star, Maitreyi Ramakrishnan. This time, in “The Sex Life of College Girls” she introduces us to another Canadian actress — Amrit Kaur.

Trying to get a spot on the masthead of the prestigious magazine, she chooses to exchange sex for opportunities. She gives six hand jobs to comedy nerds in exchange for them voting for her. “Sorry, I’m gonna crank ’em,” Bela tells her shocked roommates post-party.

And it was this opportunity to push back on long-held depictions and stereotypes of South Asian women as conservative and traditional, is part of what drew the 28-year-old Ontario native to the series. “It has been a while since the world has seen young women on television discussing sexuality with a sense of humor,” she told ETalk, a Canadian entertainment news television show. She said she appreciates that the series “showcases a range of different experiences through its multi-racial cast.” Adding that Canada is “so multicultural,” she noted that the show will be “great” for the Brown girls, “especially in Brampton and Vancouver, who have not seen a Brown girl exploring her sexuality on screen.”

Teen Vogue says Bela’s character” aligns most biographically” with Kaling. “She’s a brown girl who wants to be accepted in the world of comedy, but has to deal with not just working on her craft, but also being a woman of color in a gate-kept space, guarded by white men.”

Kaur had to overcome immigration struggles to get the role of Bela. She told Refinery 29 that while auditioning for the role, she didn’t have an O-1 visa, which allows people in the arts to stay in the U.S. for up to three years. “I auditioned, and then I got a callback for a chemistry read, and they canceled it because they found out I didn’t have the visa. My representative had to do a bunch of calls with immigration and convince them that they could get me an O-1 visa in a matter of weeks.”

While the overall series has been getting good reviews, Kaur’s acting has been specifically lauded. Richard Roeper of The Chicago Sun-Times, in its review, says that although “The Sex Lives of College Girls” is “a terrific vehicle for Kaur, Chanelle, Rapp and Chalamet to demonstrate their comedic and dramatic talents,” Kaur is the superstar. “I’d watch a series about Bela’s adventures not only through college but into the rest of her life,” Roeper writes. “She’s that flawed, that funny, that clever, that captivating.”

Ever since she was in school, a career in acting had interested Kaur. She was a senior captain of the improv team in high school, but was not allowed to take drama as she was considered “too obnoxious,” she said to MTV TV. “So I did it as an extracurricular and somehow convinced my parents that I would do theatre school.” She attended York University in Toronto. But her college life was nothing like Bela’s. “I was so attracted to theater school because everybody was crazy, and I came from such a conservative place,” she told The New York Times. “I didn’t go to a lot of parties,” she said. “I was the only girl that stayed at home,” she said.”So I, too, am living vicariously through Bela. A lot of that stuff I just wasn’t culturally allowed to do.”

Right from her theater school, Kaur realized how South Asians were portrayed as being not sexual. She was one of the only Brown girls in her theater program of 200 and recalls her teachers asking her if she was comfortable doing a kiss scene. She told The Times that this time, she “wasn’t having those conversations at all.”

Her introduction to the glitz and glamour of the industry was when she participated in the Miss World Canada Beauty pageant in 2014. Some of her previous acting credits include “ Star Trek: Short Treks,” “The D Cut,” “Nurses,” “Little Italy” and in the Netflix series “The Bold Type.” She is also a writer and producer, who wrote, co-produced, and acted in the award-winning 2020 short film “The Heatwave.”

She realizes how groundbreaking her role as Bela is. “We haven’t seen South Asian people be sexual on-screen or even to be talking about sex, let alone just being on screen,” she said in the Refinery 29 interview. “We went from not having sex at all, and then the industry allowed us to be sexual on screen, but we have to [look like] models,” she noted. “This is really the first time that we have just a normal, average girl experiencing sex and being dominant. That’s really important,” she said.

She noted how “North America has put us in this trap that brown women have to be submissive; it follows through to colonialism and white dominance, and patriarchy. But that’s not true. We’re not submissive, we’re dominant, and we’re dominant in bed. And our culture [here and in India] has a lot of work to do to come back to terms with the reality that we are sexual.”

And that goes for her family as well, who have had “a lot of struggle with me playing this part. And that’s something we’re all learning.”

She told Refinery29 that although her father comes from “a small village in India where you don’t even talk to the opposite gender” and is “uncomfortable with the idea of his daughter being on a show with the title that says sex,” he’s supporting her. Both her parents were with her during the post-release promotions which she said was “just mind-boggling.”

She is however of the opinion that Bela is not necessarily the role model for sex. “But I hope that especially brown girls, but girls in general, feel comfortable talking about sex.” She recalls how through high school and college, she and her Brown friends “continued to pretend” they were virgins. “We never spoke about sex, and because we weren’t having open conversations, there were things that were happening behind doors that we couldn’t talk to each other about because there was so much shame.”

But there are “dangerous situations that come from that lack of communication,” she noted, adding that “at least now if brown girls and girls, in general, see someone who is open about sex on screen, they might understand that other girls are also having sex and having those conversations, so that ultimately we can get to a place where girls are helping each other make sure they’re in safe situations. That’s what I really hope.”

Browning of Velma: Mindy Kaling is Surprised at Reactions to South Asian Voicing the ‘Nerd’ in Scooby-Doo Spin-Off