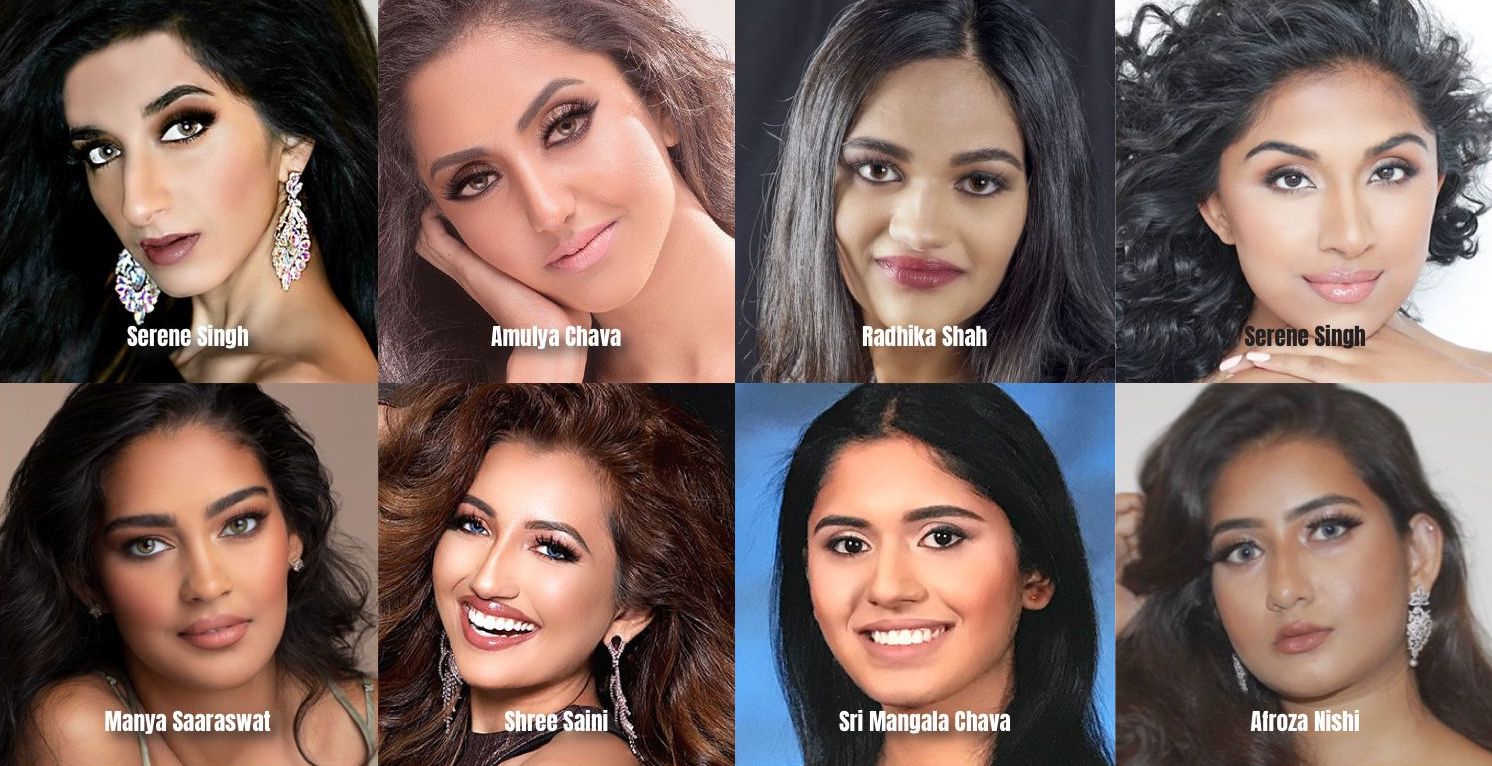 Eight South Asian Americans are among 28 contestants chosen for this year’s Miss World America contest, which will be held virtually in October. Indian Americans vying for the coveted crown are Serene Singh of Colorado; Amulya Chava of Kansas; Radhika Shah of Nevada; Manju Bangalore of Oregon; Manya Saaraswat of Pennsylvania; Shree Saini of Washington; and Sri Mangala Chava of West Virginia, along with Afroza Nishi, a Bangaldeshi American from Rhode Island.

Beginning next month, the contestants will participate in real-time preliminary competitions, receive camera time in front of a live audience and judges, interact with viewers, and rehearse and collaborate with each other. Viewers will have access to a series of online virtual events, during the month of October. The audience will have an opportunity to interact with the hosts, contestants and other show participants, take part in live polls, virtual VIP networking events, and much more! The new Miss World America and Miss Teen World America queens will be invited to an all expense paid trip to Los Angeles for an official crowning ceremony, photo shoot, appearances, media interviews, and other exciting activities, all of which will be included in the Miss World America 2020 Final webcast.

Serene Singh is a Rhodes Scholar, and will be starting her doctoral program in Criminal Justice at the University of Oxford. A Truman Scholar and an alumnus of the University of Colorado, she graduated summa cum laude in Political Science and Journalism with a minor in Leadership Studies. She is the founder of the Serenity Project Brave Enough to Fly, a nonprofit that aims to give confidence tools to at-risk women. The former Miss Colorado Teen 2016 is a speech and debate coach as well and works with students across the globe to help them find their voice, and believe in their dreams. Singh has worked for former First Lady Michelle Obama and the Girls Opportunity Alliance to improve girls’ education in South Asia. Singh plans to advance her passion for public service to one day serve on the United States Supreme Court.

Amulya Chava is an aspiring civil rights attorney, who is majoring in political science. She was the founding president of her local Wounded Warrior Project chapter. Through her efforts, she hopes to encourage others to make a difference in the lives of struggling veterans. In addition to working with our veterans, Chava is a published author and recently released her first book called “Soar.” In her free time, she loves to read books in the historical fiction genre and bake with her mother.

Radhika Shah will be attending Stanford University this fall as a Public Policy major before pursuing medical school and becoming a physician. At the age of 16, Shah founded Real Autism Difference (RAD), a nonprofit to provide respite services for those with autism in the Southern Nevada Community and beyond. In just two years, she raised over $100,000 for RAD’s programs including after school, weekend, and summer care services. She was featured on the front cover of MyVegas Magazine as a Top 100Women of Influence. In December of 2018, she was appointed by Governor Sandoval to serve as the youngest Youth Commissioner for the state of Nevada. An avid public speaker and has delivered a TEDx Talk, Shah has been a panelist at the U.S. Autism and Asperger Association International Conference, and has spoken at the Volunteers of Medicine Southern Nevada Gala. Shah is the recipient of  many service awards including George H.W. Bush’s Daily Points of Light Award.

Manju Bangalore is a physicist, actor, and the founder of Operation Period, a youth-led nonprofit addressing menstrual inequity through art, advocacy, education, community engagement, and aid. She received her physics degree and math minor from the University of Oregon in 2018 and is now pursuing her M.S. in aerospace engineering with a concentration on propulsion systems. She has worked at two NASA centers, Marshall Space Flight Center and Johnson Space Center, on propulsion and the cockpit displays for the Orion spacecraft, as well as in the White House under President Obama on science policy. In addition to her science and engineering background, through her acting, she has appeared in several plays, a Super Bowl commercial, a Microsoft commercial, and Beyonce’s Black Is King.

Manya Saaraswat immigrated to the United States when she was three years old. Both of her parents are physicians and from a young age, Saaraswat was encouraged to lead a service-driven life. At age 14, she began volunteering in the neonatal intensive care unit at a local hospital. It was here where she found her love for pediatrics and medicine. Saaraswat entered Bucknell University on a presidential fellowship which is the highest merit scholarship the university offers. While there, she was captain of the Division I cheerleading team, a tutor for organic chemistry and biology, and a paid undergraduate research assistant. Her academic endeavors lead her to a stem cell internship at Harvard university, 4 publications in medical journals, and a life-changing trip to volunteer and intern at a local hospital in India. Currently, Saaraswat is pursuing a Master of Science of Health Policy and Economics at Weill Cornell Medicine before she enters medical school.

Shree Saini is a joy-creator, servant leader, loyal friend and a global speaker. She graduated from the University of Washington and has been a visiting student at Harvard, Stanford and Yale Universities. Saini has devoted her life to community service. At age 15, she started her nonprofit and since then, she has written thousands of articles and served hundreds of nonprofits. Saini’s childhood dream to serve as Miss World inspired her to change her adversities to advocacy. At just age 12, she got a pacemaker surgery to keep her alive. Doctors said her physical activities would be forever limited but Saini persevered to regain her lost physical and emotional strength. Saini’s BWAP project is Heart Health: healing both the physical and emotional hearts.

Mangala Chava is a recent graduate of Biology from University of California San Diego and aspires to be a physician one day. She enjoys working with the elderly and has been involved with Alzheimer’s San Diego during college. She currently volunteers for Alzheimer’s Orange County. In her spare time, she enjoys hanging out with her family and friends, finding out where all the best pizza spots in town are, reading historical fiction and drawing. Her two life goals would be to open a retirement home for elderly abuse victims as well as a holistic clinic that incorporates mind, body, and spirit in treatment.

Afroza Nishi, a first-generation Bangladeshi American who immigrated to the U.S. with her parents at the age 3 is pursuing her undergraduate studies at Macaulay Honors College at Baruch in Accounting. She also works as a college coach with a nonprofit organization, and hopes to become a licensed Certified Public Accountant. She was the captain of the wrestling team at Hunter High School, which played a major role in her leadership skills development. She enjoys creating origami and has been creating origami since she was 13. In her spare time, Nishi likes to kickbox.