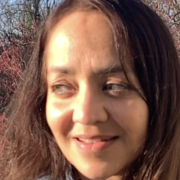 Lakshmi Kumar, picks up the phone to dial her 40th call for the day, clocking in a staggering 55 calls on a given day, totaling 800 calls over the last three weeks. Her resolve is unshakeable and talking to South Asian voters, her voice is calm; her persistence indefatigable. She says, “Once I know that the person on the other end is a Democrat, I am just making sure that they plan to exercise their civic responsibility and vote. I encourage Americans of South Asian origin to register and vote for Democrats. Absentee ballots should make it easier for South Asians to vote.” Her will to mobilize the Desi or South Asian community around the Bidden-Harris vote is determined. She shared the story of one Democrat leaning voter she contacted: “One lady was even willing to have a yard sign on her lawn even though she lived in a very red part of Wisconsin.”

They See Blue, a national group, organizes the power of the South Asian community with the goal of flipping the House Seats that were endangered in California, eventually flipping them from red to blue.They See Blue was founded in 2018, just a couple months before the United States midterm elections. A grassroots organization, They See Blue grew its membership to 200. Its website says that it held successful fundraisers, conducted targeted outreach to South Asian families through canvassing, phone banking, and sponsoring political ads on local radio stations. Now, it has come a long way with a larger membership base, including recently hosting an online fundraiser for Biden-Harris hosted by Amy Poehler, with Clinton and Maya Rudolph among others.

Meanwhile, in Barrington, IL, Paru Thondavadi, shakes her hands, arms aching from writing her 42nd postcard, encouraging South Asian voters in Wisconsin to register to vote, if they have not done so yet, request mail in ballots and vote early to avoid lines. She organizes phone banking zoom parties and training sessions to keep the momentum going for existing volunteers and those new to phone banking. Ironically, she has been a registered Republican in the past, but this time not only is her choice on the other side of the fence but she is also determined to play an active role that can swing the tide.

Along with Hemali Shah, whose dining table is spread with hundreds of postcards and mailing lists, the two spearhead the Illinois efforts of They See Blue. Now a strong group of over 30 members, the Illinois group has made thousands of calls and mailed in a few of thousand postcards as well. Younger group members, Serena Shah and Natasha Thondavadi, have been involved reaching out to college campuses to mobilize the younger South Asian voting base and text banking, which has been another cool way to join a grassroots campaign. Another group member, Vandana Walia helped organize a kick off event celebrating the Biden-Harris ticket and supporting Illinois Congresswoman Lauren Underwood.

The group’s main focus has been Wisconsin, a crucial swing state in this election and a neighboring state to Illinois. Paru says, “the antics of the Wisconsin Supreme Court had halted our request to Wisconsin voters to request absentee ballots.” Less than a week ago, the Wisconsin courts abruptly halted the delivery of absentee ballots across the state, a decision that was reversed late on Monday. In Illinois, They See Blue has focussed its efforts on the reelection campaign of Congresswoman Lauren Underwood from the 14th district. South Asians form a strong base in Underwood’s district and would like to support her reelection.

Congresswoman Lauren Underwood will join the group this weekend on Saturday Sept 19th. Online calling events have enabled many Democrats to join in, some of them not even of South Asian origin, say that they enjoy the camaraderie and the hands on approach of the group, that gives them something tangible to do in such a critical election.

They See Blue, Illinois, is excited to increase the group’s outreach, says Paru, “I have signed up to make calls with Lauren Underwood for Congress On Saturday, Sep 19, 2020. Are you free to join me?” Click here to sign up.

Farah Adil, another group member who has also been phone banking says, “Undecided voters were key to Trump’s 2016 win. History must not repeat itself in 2020.”

Please email theyseebluechi@gmail.com for more information or to volunteer.

Shalini Parekh is a journalist and writer from the Chicagoland area.