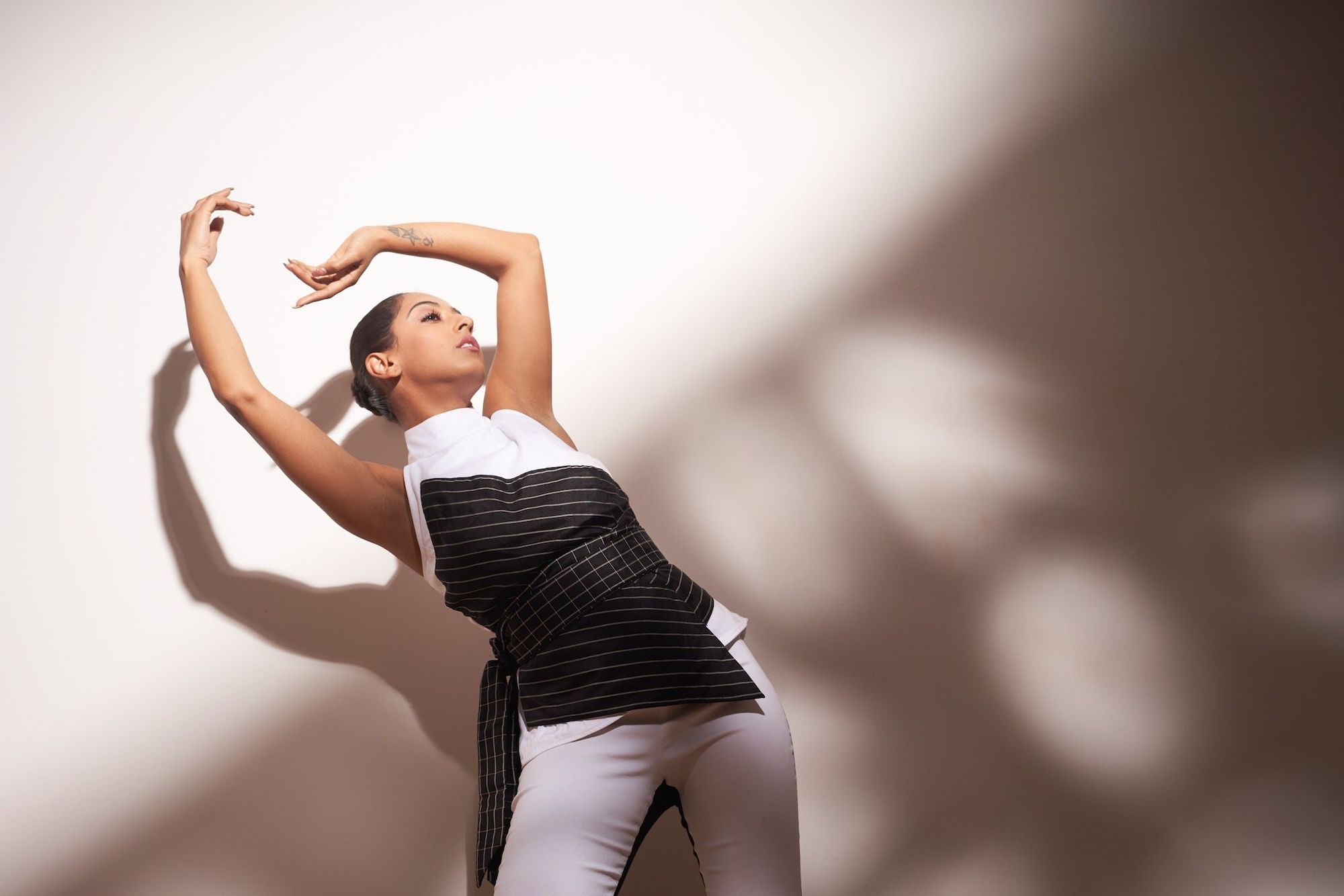 In the Heights: 29-year-old Indian Man From New York City Missing for a Week has Been Found, Safe and Sound

Indian American choreographer Joya Nandy Kazi recently received the prestigious silver statuette for Best Online Commercial in beauty, fashion and lifestyle for her choreography in WOW Skin Science’s “Holi Love Story ft. Joya Kazi” at the 42nd Annual Telly Awards. The premier award honors excellence in video and television across all screens, receiving over 12,000 entries from all 50 states and five continents. In a phone conversation with American Kahani, Kazi talked about blazing a trail in the world of choreography.

When WOW Skin Science approached Kazi to model for their product photoshoot paying homage to the company’s Indian roots, the Kazi was ready. She pitched an alternative campaign concept that would feature both the product and the vibrancy of Indian dance during Holi, the festival of colors. Needless to say, the idea clicked and the ‘Holi Campaign’ took off with flying colors, pun intended. Kazi brought in the best of her company dancers, created stunning choreographic moments, designed vibrant costumes, and shared the screen with actor Sachin Bhatt in a cute love scene, reminiscent of a Bollywood visual.

“I’m grateful to WOW Skin Science for the initiative to use their platform with the intent of doing meaningful work that has a goal of authenticity and inclusivity,” she says. “They gave me the space and creative freedom to cultivate images that share my dance and culture beyond the boundaries of age-old stereotypes and allowed me as a South Asian American to define how the culture would be represented. It was a joy to create and collaborate with them. I got to show off a little of my culture, rather than simply holding a bottle of product and modeling for it.”

Born in Mumbai, Kazi, 31, came to the U.S. just two weeks short of her first birthday and settled in the Bay area with her family. She grew up in a Hindu-Muslim home, with a Bengali mom and a Kashmiri father. “They met in Mumbai and fell in love,” she says of her parents. “Of course, not everyone had the capacity to understand and accept their union. So, they came to the U.S. to create a life of love, happiness and opportunity.”

Kazi’s mom, Papiha Nandy, a journalist in India, came to the U.S. and started a radio show called Ghungroo, and even founded a radio/TV broadcasting corporation. Her dad, Tony Kazi, a pilot, and aspiring model, started an aviation academy in the U.S. training pilots. At an age when kids are glued to cartoons, Kazi grew up rocking out to pop icon Michael Jackson’s “Black or White”. In fact, she was such a huge fan of the “Beat It” singer, that her mom used to wake her up from a nap to be able to watch him on TV. “My mom used to play it, and I would love it. He became my first crush and even wanted to marry him, when grown up,” she says with a laugh, adding, “The Odissi dancer in the video (“Black and White”) was my first exposure to any type of Indian dancing. It was such a pivotal moment. It was the first time I saw someone on TV that looked like me. That planted a seed in me. I also thought if I could dance like the Odissi dancer, he would marry me!”

Kazi, to whom representation and expression of her cultural identity in her choreography is key, says, “I know the importance of representation. My entire life’s journey was based on this one dancer. So as soon as I could, I began learning Odissi and that jump-started my career.”

With no friends or family in the U.S., Kazi says her parents did their absolute best to give her sister and her as much of a cultured upbringing as possible. Noticing her talent, passion, and love for dance, her mother enrolled her in Indian classical dance classes to learn the basics. “My mother would spend hours in the week driving me back and forth between dance classes.”

She adds: “I grew up dancing and performing within the community, but my mom told me that I wasn’t allowed to do any dance but Indian classical until I was 16.” Kazi, who is equally comfortable tapping her feet to Indian classical, hip-hop and Bollywood numbers has a repertoire that includes Odissi, Bharatnatyam, Kathak, Kuchipudi, as well as Ballet and Jazz. “I grew up as a student of Indian classical arts and felt so connected to my heritage through that.”

She started becoming more serious about dancing, and when she was 12-year-old, she knew she was professionally going to pursue it. At age 16, spotted by a Bollywood choreographer Kazi started choreographing professionally, and even opened a dance school. “That is how I started bridging the classical dance world with the commercial.”

Kazi’s love for dancing was so great that she recalls spending weekends making fliers and going to all the local stores and libraries to find students for her dance class, while her high school friends, with newly minted driving licenses, would love to hang out at the mall. Kazi spent her weekends teaching others to dance until she went to college. “My mom is definitely a tiger mom,” she says laughing, adding, “you didn’t waste time at the mall when you could be productive!”

Kazi recalls the time she told her parents about her plans on becoming a full-time choreographer. “They were kind of…surprised,” she says.  And when she realized that she didn’t want to go to medical school and pursue her passion instead, they gave her their blessings reminding her “to be sure to put her mind to whatever she chose to do” and give it her 100 percent. “For my parents, labels – Bengali, Muslim, Indian, American – never mattered. It was always about doing your best.”

Nine years ago, she moved to Los Angeles to continue her professional career in dance and choreography after studying Theatre & Dance with an Emphasis in Choreography & Production Management with a double major in Political Science and a minor in Managerial Economics at UC Davis. While she was there, Kazi founded Toofan (2006), the university’s very first competitive Hindi Film Dance Team. She presently owns and runs Joya Kazi Unlimited in Los Angeles, where the academy aims to educate, motivate, and inspire students to achieve proficiency in dance ranging from Indian, classical, and jazz to hip-hop and contemporary.

Her credits also include a choreographed dance routine in “Never Have I Ever,” a Netflix 10-episode comedy-drama by Mindy Kaling and Lang Fisher. And for those who have seen the traditional Ganesh Puja dance in the show, will surely recognize Kazi as Preeti, the tall girl dancing in the middle, dressed in a golden and red lehenga.

Speaking of her influences other than MJ, Kazi says without a moment’s hesitation, “Bollywood queen Madhuri Dixit. There’s no one better. She has always been such an inspiration – her nazakat (expression) and khoobsurati (beauty).” So enamored is she by the legendary “ek, do, teen” sensation, that she paid a tribute to her in a video that went viral and ended up reaching her very appreciative idol. This led to her being invited to be a part of “Dance Deewane” (Colors TV) in India, but unfortunately, due to the pandemic, Kazi was unable to travel for it.

However, her Madhuri Dixit tribute was aired on the show and also received a Top 5 nomination at the Universal Dance Award, LA. “The video came full circle – started here, went to India and came back right where it started. It’s one of the things that makes me so proud to be able to bring my culture to the forefront and see it being appreciated by people on both sides of the world.”

Kazi also made a second tribute to Dixit with photographer-actress Lauren Gottlieb (“ABCD: Any Body Can Dance” – 2013). “Madhuri ma’am shared that video and it was so surreal, that the queen even knows we exist.”

Kazi has also worked with celebrity choreographers like Shiamak Davar, Punit Pathak and Terrence Lewis while also training under stalwarts like Guru Kelucharan Mohapatra, Pandit Birju Maharaj, and Guru Bandana Sen. Her dance training lies in a strong foundation of Indian classical dance — Kathak, Bharatnatyam, Odissi, Kuchipudi, and Manipuri. Kazi has also studied ballet, jazz, modern, contemporary, hip-hop and Salsa. “I have been able to have the best of both worlds.”

Speaking about her experience with the Mindy Kaling “Never Have I Ever” show, Kazi says that it was an absolute delight to be able to work on the set. Kazi was also involved in the casting of the dancers, making sure those selected were trained either in classical or Bollywood dance styles. “I loved being able to choose the costumes and dancers,” says Kazi, who worked along with costume designer Salvador Perez on the set to bring authenticity to the show. “I feel that oftentimes this filtered, whitewashed, image of Indian dance culture is very limited creatively. And you are not often allowed to find your own representation. You have to fit in this box,” she says.

Kazi also nurtures a dream to be able to choreograph legendary singer-songwriters Beyonce and Rihanna. “It would be so wonderful to take Indian dance on a global stage like that, with someone representing it so respectfully. Being interconnected globally through social media, I believe our culture and identity, unlike the past, when we couldn’t share it, can be shared and accepted on an international platform. People of the culture should be setting the tone of how they want to be seen by the world. That is what I want to do through my dance.” She also hopes to choreograph Priyanka Chopra Jonas.

Kazi grew up as an immigrant child, constantly balancing her Indian heritage with the American way of life, from pool parties and baseball games to Odissi and Kathak classes. She just wants to “see Indian dance and culture represented in a way where people can be proud of it.”