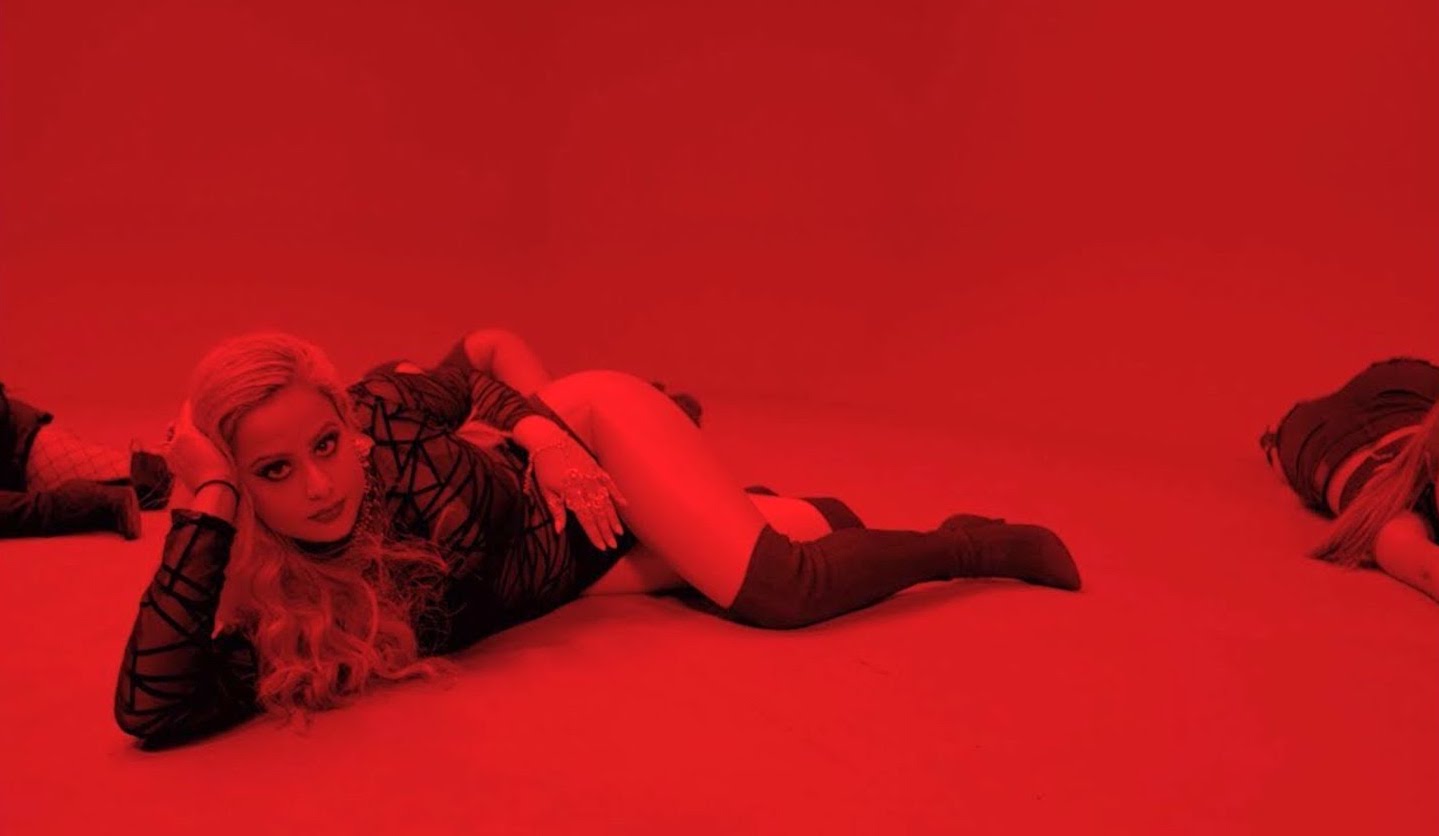 In a society where it’s not common for a desi girl to be a global pop star, Atlanta’s Movina Nagarajan aspires to be just that. With the release of her first single “Call Me Baddie,” Movina is set to break stereotypes.

“Call Me Baddie,” available on YouTube, and replete with tabla beats, EDM and western lyrics, is Bollywood thumka meets Atlanta swag. A picture in fusion, the blonde Movina, seen in traditional lehenga, jhumkas and maang tikli topped off with a skimpy bodysuit and thigh high boots, shakes her hips seductively throughout the sultry video. With a promise to ‘not give you sweet and nice but make you feel alive’ and ‘let you know that what you see is what you get’, Movina’s raw sexiness and edgy lyrics, will have her pushing boundaries, stirring things up and ‘being the one we can’t forget.’

Movina has also starred in a short film (2018) by Tharun Joji, called “Ingrained,” about chasing one’s dreams and passion. The movie can be viewed on Amazon Prime. Her sister, Meghna Nagarajan, plays the lead, with Movina playing her daughter. “They needed a classical Indian dancer, so I got called in,” says Movina, who has learnt Bharatnatyam, an Indian classical dance form.

Born in India, this 32-year-old Bengaluru native moved to the U.S. via Indonesia, when she was 10. “I basically grew up here in Atlanta,” says the dulcet-toned Movina.

An Emory graduate, with a double major in finance and music, Movina went into college thinking she would do pre-med, a stepping-stone to medical school. But music pulled her in a different direction.

“I did music and chorus all through my childhood, whether it was voice lessons or piano. But I missed music so much in college that after my first semester, without even really thinking about it, signed up for music classes. I never really wanted a double major. But music speaks to me in a way not much else does.”

Movina has learned both Carnatic and western classical music.

However, it wasn’t till her sophomore year that Movina finally decided her heart wasn’t in pre-med and decided to switch to finance. “I thought, even though music was my passion and I wanted to make it my career, I knew you couldn’t make a lot of money from it at the start. It would be a struggle. So, I switched to finance to help pay the bills and help me with my music career – recording songs or making music videos,” says the pragmatic Movina. “Being an independent artist is time consuming and financially draining. I know I have to have something reliable.”

She joined Siemens right off the bat and still works for them today. “I juggle working for them and doing music, but music is definitely my passion. I feel that is what I am meant to do,” she says adding, “things wouldn’t feel right without a tune playing in my head. The goal is to one day have music be my career and work at it 24-7.”

In a society, where traditional careers – doctors and lawyers – are joyously welcomed by parents and family members, Movina was not met with raised eyebrows by her parents. “My parents have always been very supportive. They have encouraged me to take music classes and try different things. In some of my first recording sessions, I had my parents with me and if not them, then my sister.”

She adds, “If I were to say they were not supportive, I think people would nod and understand and say, ‘oh that makes sense.’  But the environment I grew up in was very different. My parents have always let my sister and I do what we want and think how we want. They have stressed how important it is to educate oneself and be kind and respect others, but also stressed that it shouldn’t stop me from doing what I want or expressing myself.”

As to whether her parents are trained in music like her, she laughs and says, “No … not unless you count my dad singing around the house!”

As for her extended family and friends she’s not really sure. She knows they are watching her, waiting to see what happens. She admits that some are skeptical and “probably think I’m crazy or that I’m stepping outside my boundaries” but Movina, not one to back down from a challenge, is ready to meet it head on.

A family project, “Call me Baddie” has been conceptualized and directed by her younger sister Meghna, who is pursuing her MFA at SCAD, Atlanta.

“I knew from the get-go, I wanted the video to be done by her (Meghna). We have collaborated very closely together on this. We came up with ideas for the video together – the concept. My parents also gave me feedback on the song once it was recorded. They were so excited that I had an original.”

She adds, “A couple weeks before I shot it, I wore all my outfits for them and the makeup. They told me what they thought worked and what did not. They (her parents) were very involved.”

Meghna is in school to be a writer/director. Her video, “Baddie” won Best Student Director at the European Cinematography Awards. “This video is a testament to our teamwork.”

Meghna is also an engineer from Georgia Tech, Atlanta.

Movina definitely plans to collaborate in some capacity with her sister in all her future ventures, but points out that she is open to also working with other directors and artists in the industry. “Collaborating with my sister is one of my favorite things to do.”

Nothing is typical with Movina. Her video is a little bit Indian and a little bit Western. A little bit sweet and a little bit sexy. And a whole lot different. Titled “Call me Baddie,” the song and video, rejects the idea of the perfect woman – the good girl that is glorified by society. Speaking of the genesis of the song, Movina says it’s an ode to the rebellious and apologetic in us. “Call me Baddie” is about not really conforming to society and its expectations. “This is who I am. I am loud, outrageous and creative. There are a lot of people who feel that they don’t fit into the mold that society has created for them.”

“Call me Baddie” is Movina’s call to all, to be their unashamed self. To live life a little bit differently. “Be unapologetically you,” she adds.

And Movina hopes she can be a beacon to young South Asians that may want to break stereotypes. “There have always been desis that have felt this way…shackled to norms. I am now just trying to put that into song. And I hope it resonates with them.”

Her love for music started right from when she was knee high, humming along to the tunes of the evergreen Alka Yagnik, Sonu Nigam and A.R. Rehman on the radio. “I like the Indian beats and melodies. And it comes through in my music.”

But it’s not just Indian Bollywood music that has influenced her songs. “My parents listened to a lot of Western music too. They introduced me to the Bee Gees and to the King of Pop, Michael Jackson, and even to Madonna, who were trailblazers in their own right. Their music was so universal. They were bold and unapologetic and so authentic. They didn’t care if they didn’t fit the mold at that time. They expressed themselves fearlessly. They have influenced me tremendously.”

But the path to stardom in mainstream music can be difficult. “Entertainment is a very competitive field. It’s a very hard career path. The chance of being a success is very low. In other careers, like doctor or engineer, there’s a laundry list of things I am expected to do to succeed. But not in music. On top of that if you are South Asian, it gets harder. The U.S. market doesn’t know which category to put you in. I am a bit of an anomaly.”

She continues optimistically, “There’s always a challenge initially to break the norm of what they (music producers) think pop stars today should look or what they should sound like. But I think being unique is a huge asset in the entertainment business. No one wants a clone of what’s out there. So, this is something I can lean into, instead of seeing it as a huge challenge.”

As to the future, Movina is excited. She has many new projects in the pipeline and would have recorded and released them this year, if not for the pandemic. But for now, Movina is content writing songs and staying in touch with her fans on social media.

And she would love to make music for Bollywood one day. “The music in our movies is some of the most intricate, melodious, complex arrangements. When I need a romantic song fix…I’m usually going to my Bollywood playlist. So, I would love to write a couple songs for a movie. That would be a dream come true!”