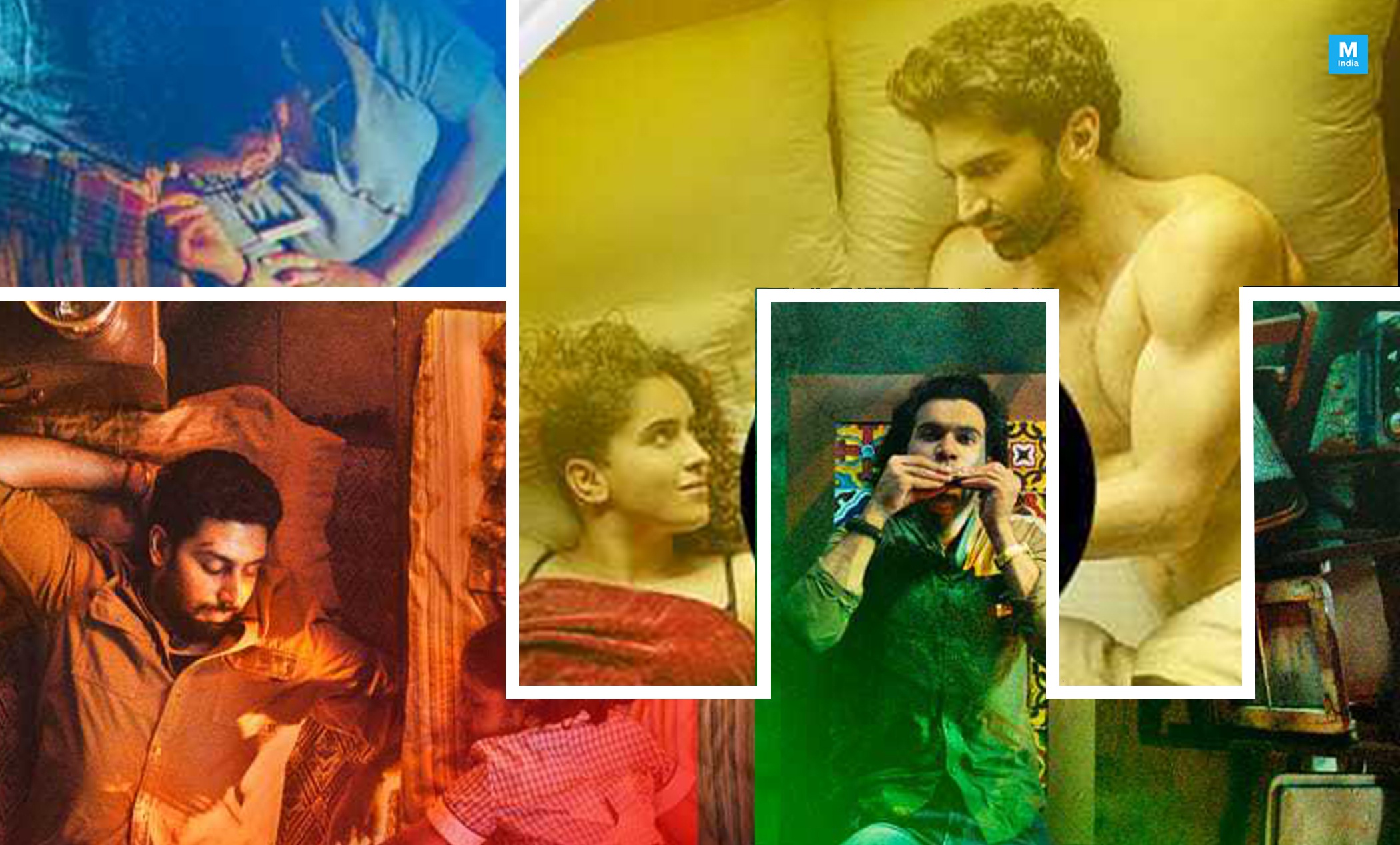 COVID-19 did not just bring normal life to a standstill, but it also changed the way avid Bollywood fans watched movies. With theatres first downing their shutters and then opening to a non-existent audience (I am swearing off the in-theatre experience till a vaccine), 2020 has seen several big name movies make their way to digital platforms like Hotstar and Netflix for their mega release. Joining the brigade is Anurag Basu’s recent directorial venture, “Ludo,” which was released for the Diwali crowd on Netflix.

“Ludo,” which comes with a stellar cast including Abhishek Bachchan, Pankaj Tripathi,  Rajkummar Rao, Aditya Roy Kapur, Sanya Malhotra, Asha Negi, Fatima Sana Shaikh, Rohit Saraf and Pearl Maney in the lead, is something of a Coen-Tarantino-Bollywood production, where everything is connected in very colorful, darkly comic ways. In this caper we get to observe a bunch of characters crisscrossing, sometimes closely, sometimes tangentially, and get to see where they end up, all to the tune of that lovely old Bhagwan dada song–o beta ji, o babuji, kismat ki hawa kabhi garam, kabhi naram.

There are very few Bollywood filmmakers who can do madcap fare like Anurag Basu. This comedic-dramatic crime escapade is a tangled thing that might need some untangling. The tangles unravel into four mini love stories focusing on couples, who are tied together via involvements, direct and tertiary, with mob boss, Sattu (Pankaj Tripathi), who does all fun parts — the pointing of guns, sneering and lusting for money and power that we might expect from these don-types.

So let’s get started unraveling.

One couple is Akash (Aditya Roy Kapur), a voice actor and ventriloquist who once filmed a scorching sex video with ex-lady love Shruti (Malhotra), and hopes to get together with her so she’ll help him hunt down whoever posted it on the internet and make him take it down. Maybe it’s Akash’s lovesick ploy to get back with Shruti, who didn’t stay with him because he wasn’t rich enough to marry; of course, but this new development interrupts her weeklong pre-wedding festivities.  Shruti becomes thoroughly invested in the venture, all the while, hoping her hubby-to-be doesn’t see her racy, steamy video. And to facilitate their caper, they approach none other than gangster Sattu to help track down the illicit video-uploader. If you are wondering, whether they resume the party between the sheets and if true love triumphs, no spoilers here!

Elsewhere, cornball, break dancing, mullet-guy Alok urf aloo (Rao), has long pined for his adolescent crush Pinky (Fatima Sana Shaikh), and was heart -broken when she marries someone else. Now Pinky is saddled with a sweet-faced baby boy and a cheating, lying scum of a husband, who somehow ends up in the wrong place at the wrong time and winds up in the clink for a murder committed by, wait for it, Sattu bhai.  Predictably, Pinky turns to Alok to help her, which he can do, despite an inability to really help himself profess his unrequited love. He bends over backwards and risks his mullet-warmed neck to get her out of one jam after another. What happens next? You will have to see it to believe it.

Then, there’s this homeless retail-drone Rahul (Rohit Saraf), who witnesses a dead guy, being made dead by none other than Sattu. So Sattu drags him back to his island crime-lair, which he soon will regret, since Rahul accidentally explodes the whole thing trying to make chai. A chef he is not. An ambulance nurse, Sheeja (Pearle Maaney), cares for the busted-up Sattu, and what with one thing leading to another, she and Rahul push the gangster into the river and hit the road with his attache of ill-gotten cash. Probably not a smart thing to do, especially since they accidentally don’t’ kill him and wind up on the run as Sattu now wants them dead!

And finally, there’s bitter Bittu (Bachchan), a freshly minted ex-con (obviously from Sattu’s gang) who’s heartbroken because he’s never met his six-year-old daughter, and her mother has told her another man is her dad. Bittu is sent to prison by none other than Sattu and now wants revenge for his life being turned upside down. Along the way he gets involved with a neglected young girl named Mini (Inayet Verma), and together, they concoct a faux-kidnap/ransom scenario that wouldn’t make it past the first draft of any high-jinx film.

As all of the characters come up with hair-brained schemes to dig themselves out of the hole, as their lives keep intersecting. Basu weaves in romance, drama, thrill, tragedy, whimsy and slice-of-life, while keeping it essentially a black comedy.

People are run over by trucks, cars end up on train tracks and cranes ram into hospitals — the physical comedy and broad humor are very much a part of Ludo’s landscape. It all ends in a bonkers climax where everyone ends up at the same time at the same place and the proverbial bullets fly.

Eventually, all this stuff comes together, sort of, barely

Some members of this ensemble cast provide a high degree of amusement. Tripathi-the-don, gun strapped to thigh, is on the top of his game, although now is a good time for him to start breaking out of the permanent goonda-mawaali typecast role.

Bachchan Jr. deserves a mention for his rough exterior-but naram dilwala reformed goonda role. And his chemistry with the precocious Mini has brought him rave reviews on social media from Bollywood and fans alike.

Rajkummar Rao stole my heart and brought a tear to my eye with his hopeless aashiq role.

And as the straight-talking, tough-as-nails nurse with a dark and cynical streak who falls for a completely inappropriate fellow, Shalini Vatsa is a delight to watch.

The trouble with this crazy caper is that it is a tad too long. The last time Basu had adopted the same unknown-characters-coming-together format was in Life in a Metro, and wrap up was one and a half hours, which was perfect.  Still, in this time of the pandemic, the virus finding an honorable mention in the movie, we could do with some hijinks, fun and games, even if it drags in bits. Ludo, despite its missteps, keeps it light and breezy, with its cast helping it to stay the course.

Stream it or skip it, you roll the dice!