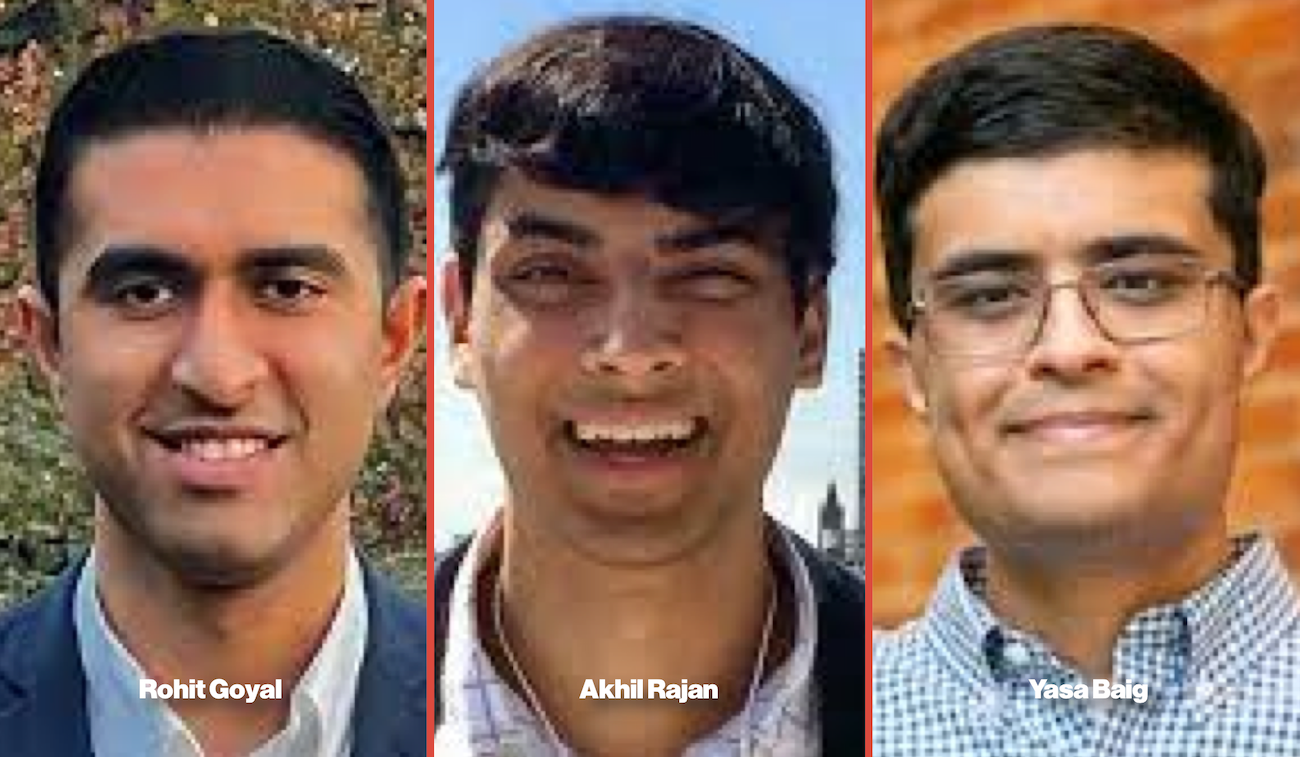 Three South Asian Americans — Rohit Goyal and Akhil Rajan, both recent Yale graduates, and Yasa Baig of Duke University — are among 41 recipients of the 2022 Marshall Scholarships, which finance young Americans of high ability to study for a degree in the United Kingdom. Named for former U.S. Secretary of State George C. Marshall, the scholarship program was established in 1953 as a gesture of gratitude to the American people for the assistance offered to the U.K. after World War II under the Marshall Plan.

Rohit Goyal earned a B.A. in economics at Yale and was elected into Phi Beta Kappa. As a senior, he led Yale to a victory in the Federal Reserve Board’s National Fed Challenge, an undergraduate team competition in which the students analyze economic and financial conditions and formulate a monetary policy recommendation. He also began a discussion series on economic policy for students and faculty. He has done research in economic methodology and labor economics and hopes to examine these fields in greater depth as a Marshall Scholar. He will study economics and philosophy at the London School of Economics.

Akhil Rajan earned a B.A. and M.A. in political science at Yale. He studies spatial inequality in the context of both political and economic divides. In the past, he has worked on policy for campaigns at the local, Senate, and presidential levels, as well as in his work as a fellow of the Kerry Initiative at Yale, an interdisciplinary program that tackles pressing global challenges, and as a political appointee in the U.S. Department of Agriculture in the Biden-Harris administration. In his academic research, Rajan has studied the effects of gerrymandering, the political behavior of underrepresented candidates, and the impacts of campaign finance on American democracy. He will pursue a degree in comparative social policy at Oxford University.

Yasa Baig, a physics and computer science double major with a minor in mathematics, is an Angier B. Duke scholar and was awarded the Goldwater Scholarship earlier this year for his scientific research. At Duke, he has been developing a mathematical and deep-learning-based technique to quantify emergent complexity in bacterial growth dynamics under the mentorship of Lingchong You. Baig is fascinated by questions about how living systems spontaneously generate order out of chaos. He plans a research career in biophysics applying nonlinear and complex systems theory to complex biological systems. He is also the co-founder and chief software engineer of the Duke Applied Machine Learning Group (DAML), one of the largest student software and machine learning engineering groups in the US. When COVID 19 caused the loss of many computer science student internships, Baig and his colleagues at DAML founded the Phoenix Project which paired more than 200 students with new, virtual internships. In addition to his academic work, Baig volunteers as a crisis counselor for the Crisis Text Line. He also enjoys playing the violin and hiking.