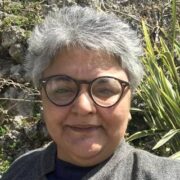 Ten days have passed since the news of the protests led by women in Iran against compulsory hijab broke, triggered by the brutal murder of #MahsaAmini by Iran’s morality police. Our screens have been flooded with angry militant protests by Iranian women and men on the streets and on Twitter.

From the first videos of a woman cutting their hair standing atop a utility box at a protest in Kerman to the latest heartbreaking images of a sister at her brother’s funeral, hacking off her hair as she grieves, scores of Iranian women, young, middle-aged, and old, have taken a scissor to their locks.

This trope has been adopted by international protests on the issue. From New Zealand to San Francisco, women have cut their hair to express solidarity. In the most significant action thus far, thousands of Kurdish women from Rojave (yes, the very same region in which ISIS was defeated by the efforts of Kurdish women’s protection groups), women burnt the hijab, marched and cut their hair.

It’s a very Googled question: why has this mode of protest been chosen? What does it signify? One answer is obvious and does not need to be explained to us in India, familiar as we are with the ritual tonsuring of the head following death. Mahsa Amini was Kurdish and the cutting of hair is a Kurdish mourning ritual. But how do we read its adoption across the board as a gesture of defiance?

The compulsory hijab law in Iran mandates that women must cover their hair (and wear long, loose-fitting clothes to hide their figures). An uncovered head is treated legally as a criminal offense that is met with incarceration and physical violence; socially, it is considered an irredeemable provocation that legitimizes pornographic violence and impunity—women can be, and are, verbally assaulted and can be publicly beaten by complete strangers for not wearing ‘proper hijab.’ In religious terms, it is interpreted as heresy and a complete repudiation of the religion of Islam.

Understanding the above is important for us if we are to make sense of the fact that some Muslim women demand to be allowed to wear the hijab in India: they do so because they see the hijab as an expression of their personal faith. Nowhere do they ask for, or invoke, an Iran-style legal-social-religious institutionalized impunity to be exercised on other Muslim women or on themselves.

How is cutting off one’s hair a protest response to this complex of impunities? The Iranian women tearfully, angrily, triumphantly cutting their hair before our eyes are speaking directly to their oppressors. In this singular act:

—There is defiant mourning: The shearing of one’s hair is an assertion of grief at the pain of losing sisters whom the Mollah’s laws brand as erring, and whose ‘correction’ (by torture and imprisonment) is not supposed to be mourned.

—There is fiery aggression: If the Mollah’s decree is that a woman’s hair is such unsupportable titillation, he should then have to watch her remove it—her rebellion can no longer be invisibilized by the hijab.

—There is freedom from patriarchy: In patriarchal fantasies of women’s self-image, a woman’s hair is supposed to be her pleasure (think back to all those Bollywood actresses who can’t seem to occupy an iota of time without grooming their hair)—even though in Iran, it’s only allowed to be a private one. By cutting her hair, an Iranian woman chooses to remove this mark of her femininity and be seen as a person, a human with rights.

—There is an assertion of absolute equality before God and the state: The Mollah’s state and religion see the shrouded woman as the only accepted subject of the state and the religion. By shearing her hair, an Iranian woman contests both these definitions—she is, as a woman and as Muslim and as a citizen as those who are covered, and who are not her adversaries. To be shorn is to be shorn of the Mollah and his definitions of religion and state as purveyors of patriarchal shame and inequality.

News out of Iran has now reduced to a pitiful trickle. The pundits are filling the void, speaking darkly of the inevitability of a defeat by a powerful totalitarian state, the (very real) designs of imperialism, and the (very real) rise of Islamophobia. I am no pundit or soothsayer, but I see no defeat to be possible ever for the ideas of freedom and equality, renewed so powerfully for us by the ongoing #IranProtests2022.

Ayesha Kidwai is an Indian theoretical linguist. She is a professor at the Jawaharlal Nehru University in New Delhi, [1] and an awardee of the Infosys Prize for Humanities in 2013.