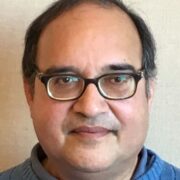 Perhaps the most astonishing moment in my life occurred in the Bombay – now Mumbai – airport. The year was 1964, I was nine years old, and my family had just returned to India. Until that day I had thought of myself as an American child living in a suburb of Washington, D.C. with an Indian mother who wore saris, often cooked delicious Indian meals, and on special occasions would make the best of Indian sweets, sandesh. I’d previously lived in India after my father received a Fulbright scholarship but was only three years old when we returned to the U.S. It had been a time before memory with no words to hold the experience.

The India I had absorbed through all my senses in those two years came flooding back as we sat in the airport waiting for friends. I remember it as an overwhelming feeling of joy and wonder. In my heart, in my bones, I was home. My Indian grandmother lived with us for that magical year in New Delhi and I got to see my uncles once again. A summer vacation that included visits with friends in hill towns of Sattal, Ranikhet and Nainital holds some of the most wondrous moments in what has been, thankfully, a predominantly happy life.

Life is full of surprises. I was struck with a severe form of ankylosing spondylitis, a type of arthritis, when I was 18. There have been four hip replacements, a sudden triple bypass surgery, glaucoma, and other medical adventures along the way. My experiences with the health care industry have been troubling at times. In 1997 I had to argue repeatedly with doctors to authorize an x-ray which ultimately revealed that I had been walking with crutches for months on a broken artificial hip that had come out of the socket. Still, my encounters have been nowhere near what many people have suffered when they could not afford health care.

It’s probably no surprise that I became a member of the Party for Socialism and Liberation in 2005. My Indian mother and American father were both born in November of 1921, she in Benares, and he in Raleigh. Growing up under British rule, she experienced racism and colonialism on a personal level. He, a white child growing up in North Carolina, despised the legally mandated racism governing everyday life and learned to question authority at a young age. It was only natural that my father, my sisters and I joined huge demonstrations against the Vietnam war. Years later he told me that some of the best people he’d ever known were communists who fought against racism. Although my parents were not socialists, they were progressive; much of how I see the world has been shaped by their experiences.

The United States today faces a convergence of crises, many which have been growing for years and are now obvious for all to see in this year of the number – 20/20 – associated with accurate vision. If we look around, we see that more than 212,000 people have died in the U.S. as a result of Covid-19, roughly one fifth of the global total, in a country with 4% of the world’s population.

Class divisions have never been starker. People are forced to live on the streets while unaffordable luxury apartments sit empty. Tens of millions of Americans lack health insurance while the pandemic rages. In September NPR reported that nearly one in four families in this country have experienced food insecurity in 2020. At the same time American billionaires have seen their wealth increase by more than $500 billion since the start of the pandemic. Even as the pandemic brought terror and death, people in major cities and small towns have been rising up to protest police murders and systemic racism. Massive displays of widespread police violence inflicted on protesters have put to rest the tired excuse that a few “bad apples” were responsible. 20/20 vision indeed.

All of this suffering and violence pales in comparison to the rapidly growing threat of environmental disaster caused by a profit-driven economic system. It’s easy to mock Republicans who deny the science of climate change, but Democrats’ proposals fall far short of seriously addressing this existential crisis. The very concept of infinite growth and planned obsolescence of products on a finite planet with shrinking resources is ludicrous.

We must start thinking outside of the box and organizing to build a sustainable world that meets peoples’ needs. The Party for Socialism and Liberation’s campaign addresses these and other crucial issues that have received little attention from either major party. The ten-point program, posted in the campaign website, lariva2020.org, addresses pressing domestic and international issues. More than a collection of promises that can be jettisoned when major donors complain, it is grounded in years of struggle in communities around the country.

When I first met PSL members in August of 2005 I had no idea that I would be running as Vice Presidential candidate with Gloria La Riva in 2020. That summer I was one of many volunteers leafletting and helping spread the word about a September antiwar demonstration in Washington, D.C. Hurricane Katrina devastated New Orleans that summer, revealing a shocking lack of concern for the lives of poor, predominantly Black residents of the city.

This contempt for human life on display after Katrina, together with the war based on lies, exposed a system that was a threat to people everywhere. Gloria La Riva and other PSL members traveled to Louisiana to draw attention to the governmental neglect and the work done by people who came together to protect the community after Katrina. She recently organized assistance in and around Lake Charles after yet another hurricane.

I immediately liked PSL’s socialist perspective and the way people worked together. There was serious commitment, but also joy, a sense of humor, and a refreshing lack of big egos. I continued to volunteer around the office in the weeks following the demonstration and became a member a few months later.

Sometimes it seems the world is always in crisis. My parents met in time of violent upheaval at the Kurukshetra refugee camp after independence and partition. He was a volunteer with the American Friends Service Committee, an organization that received the Nobel Peace Prize along with the British Friends Service Committee in 1947. She, a graduate of Isabella Thoburn College in Lucknow, had applied to serve in the time of crisis. Trained as a social worker, she organized activities for young children in the sprawling camp and taught a Hindi language class that he began to attend. She declined his initial marriage proposal just weeks after they met. “Crazy American,” she’d recount, smiling, lost in thought about those early days. Their friendship grew, and three years later she changed her mind. My sisters and I are forever grateful that she did.

(Top photo, the author with his parents and older sister in Raleigh, North Carolina. c. 1955.)

Sunil Freeman is the vice-presidential candidate of the Party for Socialism and Liberation.