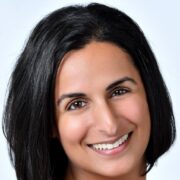 My love for chicken wings began early when my family first moved to America. In my TEDx talk, “Chicken wings made me unstoppable,” I shared how chicken wings helped me transform my life from my darkest days.

It’s always a topic of discussion with friends, ‘why do you love wings?’ And I always reply, ‘because they’re delicious!’ But more so, chicken wings come in so many flavors that you can never get bored of them—tired of one flavor? Change the sauce! We can embrace this same philosophy in our own lives. If we feel stuck or need a change in our life, we can always re-sauce ourselves. That’s the key message of my TEDx talk: “re-sauce yourself!”

I am no stranger to re-saucing myself. I have dabbled in multiple careers, including investment banking, strategy consulting, and eCommerce. While trying to figure out what I wanted to do in life – at least professionally – I stumbled upon stand-up comedy, and my life changed. Since discovering comedy, I’ve been able to host my own radio show, start a podcast, and perform comedy worldwide from Saigon to New York. Today, I’m ‘Florida’s Funniest Female’ and have shared the stage with comedic legends. I have an award-winning podcast – Creative Breakthrough – which features conversations with creatives from under-represented communities, including South Asians such as Sarah Thawer, Rizwan Manji, and Ali Velshi. And I’m also a marketing strategist at Disney World.

My inspiration for my TEDx talk was to encourage others to shift their mindset, find their inner strength, and overcome past struggles. However, my initial motivation came when a personal branding company reached out to me on LinkedIn. They wanted $12,000 a year. When I asked what was included in the package, they mentioned a TEDx talk, but I wouldn’t be ready until year three! I’m all for coaching, but this sounded ridiculous. I wasn’t even contemplating giving a TEDx talk at the time, but suddenly I felt inspired.

Giving a TEDx talk is not easy. First, I had to put together an application similar to a college application. The application consisted of multiple essays, and the selection process was competitive. Luckily, I have experience assembling strong applications. I have my BA from Brown University and MBA from The Wharton School at the University of Pennsylvania.

The focus of TEDx is to share ideas worth spreading. TED.com describes a well-formed idea as one of two things: “Something that is new and surprising; an idea or invention that your audience has never heard about. Or a great basic idea (that your audience has maybe already heard) with a compelling new argument behind it that challenges beliefs and perspectives. In other words, an idea isn’t just a story or a list of facts. A good idea takes certain evidence or observations and draws a larger conclusion.”

For me, figuring out how to express ideas I am passionate about was the most challenging part of the process. I spent weeks on the application – exploring ideas, brainstorming with friends, and writing essays. I finally went with my gut and wrote about chicken wings. I knew it was outside the box, but I felt it was unique and authentically me.

Once you get accepted to give a TEDx talk, you have to write a talk that’s under 18 minutes long, memorize it (there were no teleprompters), and deliver it in front of an audience. I had no idea how poor my memory had become. After weeks of trying to memorize my talk, I recall deleting an entire section. I could not commit it to memory, so I removed it. The other hard part was the delivery, which is different from a comedy routine. If I forget my lines, I can’t ad-lib, talk to the audience or say, ‘give it up for your waitstaff!’

In my talk, I share my personal obstacles and the challenges I faced with religious intolerance, racism, and sexual assault. Using the chicken wing as a metaphor, I weave the concept of “re-saucing” yourself into the narrative, sharing how I discovered my authentic self — and my voice — once I started choosing my own sauces in life.

‘Jago Hua Savera’: A Classic Pakistani Film Based on an Indian Novel Set in East Bengal

You have to want to change your sauce, which can be a difficult realization to come to. However, acknowledging that you’re drowning in a stale sauce and that you want to make a change is a key step in the process. I was angry and depressed. And every day, I was spiraling into a deeper hole of sadness and despair. One day, I decided to talk to a therapist, which I hadn’t previously considered an option given the cultural stigmas. This was my first step towards re-saucing myself. Taking that first step is the hardest, but once you throw away the stale sauces, you’ll make room for many new, tastier sauces!

Watch my TEDx talk and ask yourself: How will you re-sauce yourself?

Shereen Kassam is a South-Asian-East-African-American comedian and Disney marketing professional. She has performed worldwide on stages from New York to Saigon, as well as appeared on HBO and opened for Arsenio Hall. Shereen was recognized by the Orlando Business Journal as a 40 Under 40. She completed her BA at Brown University and her MBA from The Wharton School at the University of Pennsylvania. Shereen currently resides in Orlando, Florida.