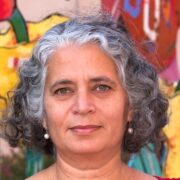 During this pandemic sheltering, as a busy and stressed frontline worker, I spent my short breaks with stand-up comedy clips online. I stumbled upon short clips by a clever and funny young man from India, Munawar Faruqui. He reminded me of a newspaper column that I used to read when I was growing up in Delhi, in the 1970s. It was called “With Malice Towards One and All” and was authored by a well-known journalist, Late Khuswant Singh. He wrote intelligently and offered an opinionated summary of the news, in a gossipy manner, to give his readers the pulse of our times, along with something to agree or disagree with. Khushwant Singh was to Delhi what Herb Caen was to San Francisco. They could find humor in anything and everything, and despite their irreverent tone, obviously loved the places they belonged to. If you never read newspapers, think of the opening monologues of the late night television shows in America. Munawar Faruqui, aka Munna, seemed to me to be a man following in that tradition.

Munawar is serious about comedy. He is comfortable in his skin and knows where he belongs, a small town Muslim from Junagarh in Gujurat, who came to the big city Mumbai, as a kid of 12 with his father and sisters, after his mother was no more. He reveres nothing other than making his audience laugh. He is an equal opportunity offender. He calls out nonsense wherever he sees it, as he sees it. He brings a perspective that resonates with my attitude, and that of millions like us, the urban middle class. We are hardworking, self-reliant, creative, no-nonsense, grounded, and do not take ourselves too seriously and tend to trust the world despite its absurdities, because that’s the only way to live well. His short online videos had me charmed and I became a fan, even though he makes jokes about desi meddlesome aunties like me. He has made a place for himself as a YouTuber. One of his clips said he shared free content online, but would like to see the viewers at his show where he has new material. My guess is that he makes his living from that. If I lived closer, I would definitely try to catch his show.

Earlier this month, Munawar was to perform for a New Year’s show in Indore. At the start of his show, a local politician’s son complained that Munawar was about to make jokes that would offend his Hindu religious sentiments. He and his hosts were arrested and are still in jail. Several months earlier, Munawar was cyber bullied for a clip on YouTube, and had, under pressure and for the sake of his own safety, issued an online apology for it. The offensive joke involved a popular Madhuri Dixit old Hindi film song.

Indore is in a state ruled by the Hindutva extremists. Munawar’s arrest seems to be politically motivated. News reports online say that even the police say they have no evidence against him. Yet, his lawyers have failed in all three attempts, including one to the High court, to get bail for Munawar. There are videos of local goons online, threatening to teach Munawar a lesson, and also all those Hindus attending his shows and laughing at his jokes, in front rows. The choicest abuses towards mothers and sisters and what they will endure were part of the threats made in the video I could not tolerate to watch, both as a woman and the potential front row fan.

My Hinduism is not so weak that it would be damaged by a comic getting a laugh out of a mythological reference. My Hinduism has Gods who are openly celebrated for causing mischief, with stories of acting as thieves (Krishna is called makhan-chor, literally butter-thief, but also known for stealing clothes from riverbank to see the ladies bathing in it embarrassed), having multiple girl-friends (Gopis of Krishna), whose idols in temples have their beloved and not their wife (Radha, not Rukmini, for Radhe-Krishna) being worshipped alongside them. Lessons in morality are not dictated as just one right way by anyone in Hinduism, not even the Gods. The Hindu holy scriptures give each Hindu the permission to find our own path, even if it might involve fighting with our own cousins (Krishna, as Arjun’s charioteer and advisor, urges him to deal with the difficult dilemma he faces, with courage and not being weak-hearted). Hinduism celebrates many different ways of being. As reincarnation and karma settle all scores eventually, this life must never be taken too seriously. My Hinduism is outraged by the online threats.

It seems that Munawar Faruqui is picked on because he is a Muslim and also because he is a soft target. He has soft power as an influencer with several of his videos having been watched over a million times. His jokes poke fun at our ways to reveal the truth of who we are. Humor is also a coping mechanism and therapy for the tragedies endured that we are helpless to escape from. Those bullying him reveal their own weakness and cowardice. They do not have the skill and power to win hearts and minds, as Munawar does.

His family had to go into hiding for their own safety. His friends are losing hope, and wonder why their caring, helpful, funny, sensitive and generous friend is being detained. His only weapon is his comedy. If he was granted bail, what might he do? Tell a joke or two? The only reason to detain him is to silence the truths his jokes reveal about who we really are. To stay silent and not express my outrage feels wrong, even as I accept my sense of utter helplessness at this tragic situation. Munawar is the voice of sanity, freedom and laughter.

India has millions of young people like Munawar Faruqui. Neither the government nor the corporates can provide the opportunities needed to employ the talented youth in ways that will provide a decent living. We need to leave the young folks alone. If the youth won’t challenge the status quo, who will? If they are not creative, the unemployed young people will end up as pawns for one or the other side of a political power-base. That would not be good for anyone, not good for the future. Don’t take my word here. See Munawar’s online content and that of the ones threatening him. Who would you want to see online and meet in person?

Dr. Jyoti Bachani is an Associate Professor of Strategy and Innovation at Saint Mary’s College of California. She is a former Fulbright Senior Research Scholar, with degrees from London Business School, UK, Stanford, USA, and St. Stephen’s College, India. She is the co-founder of the U.S. and India chapters of the International Humanistic Management Association. She translates Hindi poems and edited a poetry anthology called “The Memory Book of the Poetry of Diaspora in Silicon Valley.”