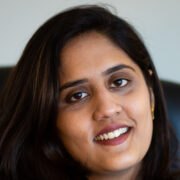 Waxing Hinduphobia: No Amy Wax, Indian doctors, Like All of Us in the Profession, Will Not Be Silenced

Ever since I started screenwriting, I have been so fascinated with writing stories about the interpersonal dynamic between siblings. There is something about that push-and-pull dynamic. Questions like, how can you hate each other’s guts, but still share a very real, raw love for each other? How can you go from screaming your lungs out to one another to bickering about unimportant things? And how can you slip from anger and rage to annoyance in just a second?

Honestly, no one pushes your buttons quite like your siblings do, and I wanted to explore that in my writing. For years, I wanted to write and direct a short film about a pair of Indian American sisters who come together after the sudden death of their parents. When the pandemic washed over us, and I was hunkered down at home like the rest of the world, I knew it was time to work on it.

I knew my previous collaborators – Kankana Chakraborty and Ria Patel, who have worked with me on my previous short films, “Maa” and “Bandaid” – would play the two sisters. I also had a rough idea of the film’s premise. I began working on the script with a writers’ group full of highly-trained writers.

Over the next few months, I wrote and re-wrote the script that eventually became “The Rose Garden.” I worked with my writer friends, Kankana and Ria, my family, every single person I could find. I was determined to make this script a success.

In it, I had poured parts of myself in a way that I had never before. Through Lisa (Kankana) and Damini (Ria), I channeled my own experiences with anxiety, something that I was too afraid to do before. I also channeled my decade-long grief of losing my maternal grandfather into “The Rose Garden,” and by early 2021, I decided to submit it to Film Fund grants in order to secure the funds to film the project.

“The Rose Garden” did end up placing as a finalist in the ScreenCraft Film Fund in 2021, chosen out over 1,000 applicants.

After months of deliberations, I decided to launch a crowdfunding campaign on Seed&Spark to raise the funds to finish the production and post-production of “The Rose Garden.” The campaign goes live on the 18th April, and we aim to raise $12,000 for the project. The funds raised will go towards paying the cast and crew, location permits, camera and lighting equipment, insurance, craft services and meals, production design, COVID safety kits, post-production costs, film festival submission fees and contingency.

I believe that “The Rose Garden” is a very important film to make. It deals with topics that are often taboo in the South Asian community, such as mental health issues. I have always maintained that I want to bring such topics to the front of conversations and create awareness for it through my films. “The Rose Garden” offers up a very nuanced take on the topic as well, as it shows how these issues can impact both the person going through it, and their family members. It also deals with issues of raw, painful grief, and the importance of sisterhood.

I’ve also always been passionate about improving and increasing the authentic representation of South Asian people in American media. I want to go beyond the stereotypes and cliches and tell well-rounded, layered stories that help change the narrative. I know that minority stories are always viewed as something exotic and foreign, but I think so many of our stories are very universal. I want to normalize our experiences and show the world how our culture shapes us.

On the Bright Side: 21 Things That Happened This Year That Made My 2021 One for the Books

I believe that “The Rose Garden” does just that. While Lisa and Damini are Indian Americans and their day-to-day lives are very much shaped by their Indian upbringing, at the end of the day, they are two sisters who have to find each other again, after the tragic death of their parents. It’s a universal tale that anyone can relate to.

So, I truly hope that you support our film and back it on Seed&Spark. We have a range of perks available for our backers, with surprise new perks that will pop up in the middle of the campaign. Together, we are an award-winning team of creatives, who have collectively won over 50 awards for our work, and we are very excited to bring “The Rose Garden” to life.

I am so excited to invite you to join us on this journey. You can back our project here at Seed&Spark. You can also follow the page for updates and to help us unlock many perks from Seed&Spark. You can also follow our social media handles: @rosegardenshort (Twitter) and @rosegardenshortfilm (Instagram). Please share the link with your friends, family and network, and we can’t wait to make this movie.

Nidheya Suresh is a Los Angeles-based writer and filmmaker of Indian origin. Over the past 5 years, she has written, directed, and produced five award-winning short films. Most recently, her film MAA won the Best of Out & Loud at the Out & Loud Pune International Queer Film Festival, and her short script “The Rose Garden” was a ScreenCraft Film Fund Finalist. She is currently in the pre-production of “The Rose Garden.” After she completed her degree in Screenwriting, Suresh became passionate about telling South Asian and Indian American tales in a nuanced light. She aims to bring forward these stories with compassion, humor and detail often missing from these narratives.