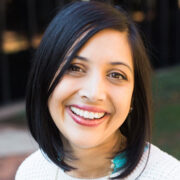 Every time I see Kamala Harris, I get chills. This is the first Indian-African-American female to be nominated as a Vice Presidential Candidate of a major political party. It’s absolutely mind-blowing to see Brown and Black children have a role model who represents and validates their Indian American and African American identities.

However, by calling her “Kamala Auntie” many South Asians are privileging her Indian identity and overlooking Kamala’s Jamaican identity. We need to address the complexity and nuances of her multicultural identity because the South Asian American community has often turned a blind eye towards racial issues related to being Black in America. South Asian Americans have remained complicit in White supremacy because we have reaped the unearned societal benefits from being Brown. Many South Asian Americans have been able to achieve success in America and so they want to preserve their status as “good, model” minorities.

Kamala’s mom knew her Black identity was complicated from the very beginning. When Kamala’s parents divorced, she was raised primarily by her Indian mother. However, even after her divorce, her mother made it a point for Kamala to identify with both her Indian and Black ethnicities. In Kamala’s autobiography, “The Truths We Hold,” she notes that “my mother understood very well that she was raising two black daughters. She knew that her adopted homeland would see Maya and me as black girls, and she was determined to make sure we would grow into confident, proud black women.”

There is a history of discrimination with the South Asian American community when it comes to the color of one’s skin. South Asian Americans need to tackle the issue of anti-Blackness by unpacking the biases that exist within their own communities. Lighter-color Indians are often racist toward darker-colored Indians. Many South Asians believe skin color determines a person’s worth in society. India even has an entire beauty industry dedicated to helping dark-skinned Indians make their skin a lighter color by manufacturing products such as Fair and Lovely. South Asian Americans need to acknowledge that to accept Kamala, means to accept her whole identity as a Black woman and as an Indian woman.

We want to move away from looking at the world in either/or. It’s not either Indian or Black but navigating the complexity between the hyphens. We need to privilege and honor her multiple ways of being in the world. In America, the Black/White dichotomy has dominated racial conversations. Using this framework, we are all on a Black/White continuum that leads towards whiteness. Using the model minority stereotype, South Asian Americans are equated with Whiteness due to their educational achievement and their cultural values that stress hard work. As a result, South Asian Americans strive to associate with Whiteness and disassociate themselves with helping and empowering Black communities.

Dr. Amita Roy Shah is the founder of My Social Edge.com and Hybrid Parenting.org. She is an adjunct professor at San Jose State University in the Department of Child and Adolescent Development. She is also the author of “It’s Time for Holi!,” “Lights, Camera, Diwali!,” and “Brain-Based EQ for Kids!” She has a Doctorate in Curriculum and Teaching from Teachers College, Columbia University.