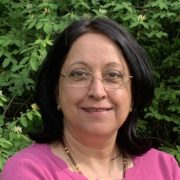 The Foreigner in Me: How I Finally Regained My Identity and Exhaled

The move from India to the shores of America was driven not by any starry-eyed notions of ‘living in America,’ or even forced by an arranged marriage by family. I had consciously — and happily — made the decision to relocate with my new husband following his career opportunity.

I was prepared for big changes, but the ones I encountered left me somewhat perplexed.

The contrast with the bustling metropolis of Delhi to a quaint university town in Virginia was the first shocker. Being told I had an ‘accent,’ by a person with a deep southern American drawl, was truly amusing.

After a decade of mastering the madness of Delhi traffic, it was shocking to get a ‘fail’ on my first DMV driving test. Apparently, I was ‘too confident,’ and was ‘showing off’ my luxury car. Was that comment racially motivated? Perhaps.

Moving on … to colloquialisms. Most of us North Indian/Punjabi types are more than familiar with the ‘marney jyogia’ phrase. My grandma used to say ‘jeenay jyogia’ with the same anger and emphasis. Hence the typical American phrases like ‘You can’t win for losing” and ‘Same difference’ particularly spoke to me.

Though my husband and I had made the move to the U.S. voluntarily, our kids — despite being born here — did experience issues of belonging. Though American citizens by birth, they were deemed foreigners due to their warm skin tones. Religious instruction was their main conflict — having to participate in the Hindu rites at home as well as blend in with the mostly Christian instruction at school — but cuisine and culture were also significant hurdles.

A report card did not elicit ‘good job, buddy,’ but rather questions on the missing point or two that would make a complete 100. Did this tough oversight help them to excel academically? Yes! Did it elicit comments from our friends on our tough attitude — that it was pushing the kids into a life of therapy? A resounding yes to that, too.

Maidens of the Moon: The Joyous Celebration of Kumara Purnima Kindles Memories of Home

Graduation elicited more resentments from friends and peers, resultant from choice college acceptances for our kids. Never mind that these kids — albeit with some ‘cultural’ influencing by their Indian immigrant parents — spent more time hitting books instead of parties.

At this point of our lives, divided almost equally between our birth land and our chosen country of domicile, we often wonder … are we Indian or American? This perplexion weighs heavily in this current political climate. On one hand, though Non-Resident Indians are allowed to vote in the homeland, logistics prohibit it. And in America, our hesitation to get politically involved stems from our immigrant status. As most of the Indian Diaspora, we feel frustratingly helpless to contribute substantially to either of the two countries/nations that we call our own.

Born in Delhi, India, Komal Prasad emigrated to the U.S. in 1993, celebrating her first wedding anniversary in her new country of choice. Together with her physician husband, she raised two children while balancing the work-home lifestyle which is the norm in America. As the children grew older and needed more parental attention, she changed gears, and became a homemaker. This allowed her time to delve into her artistic side. She is currently an award winning fused glass artist, with a home studio/ gallery. www.amaalgam.com