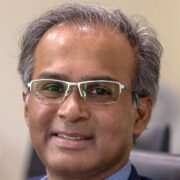 These are the words that left an impression during my recent visit with Sri Sri Ravishanker who is a very popular yogic guru and founder of ART of Living. The obvious question that surfaced was “How does one go about creating such a world, such a body and such a mind, filled or void of memories”? I thought through this dilemma with my “intellect” as is customary with the various avatars I inhabit. What is the blueprint for such a state of existence or such an Art of Living?

As an allopathic-trained surgeon, I scoured and probed to understand this situation. The logical and intellectual exercise ingrained in western medicine was to be reductionist to identify a cause-effect relationship. Is the solution rooted in education? Does the problem manifest in childhood and worsen over time? These were the type of inquiries that surfaced in my mind. I hoped to come up with a logical diagnosis and match it to a solution. This exercise left me consumed for some time but left me with more questions than answers.

Modern allopathic health care and modern educational institutions don’t understand and recognize the immensely complex interplay between the mind and body. The dynamic interplay between the two are thought of in a purely physical sense with a cause-effect relationship. Such an analysis leads to the logical progression of thought and experimentation by isolating events to test various interventions to cause beneficial changes. However, there is a growing realization in the sciences at large, and specifically in medicine, that the realm of mind sciences and consciousness and the various deeply interdependent systems is out of grasp. Many issues and phenomena simply can’t find a diagnosis or an answer in modern scientific methodology.

As Subash Kak, a scholar, scientist, intellectual, educator, academic, and author says “there is a problem with modern science that can’t explain any more than it has as things are starting to break apart. The realm of consciousness is now the in thing to understand.” There is a big void in science and medicine. When considering a complex interdependent system aptly explained through the “ant in an ant colony” analogy by Nicholas Naseem Taleb, an options trader, a professor, an eminent mathematician, an intellectual, an author and a scholar who studies “risk,” there is a growing realization that an ant behaves a certain way when alone and completely different when in an ant colony. This analogy and reference to this framework are important when dealing with mind sciences and human development.

For a complex interdependent system, a reductionist analysis does not suffice. Hence the entire framework of western childhood education and psychology must be re-evaluated. Most of the western framework of human psychology and the mental health and paradigms surrounding mind sciences are based on psychosexual desires in a Freudian sense and other aspects that evolved along this line of thinking. There are other aspects of psychology and mental health that stem from a pharmacotherapeutic and psychotherapeutic approach to intervention. This dual approach and treatments certainly help with some disorders. Yet, they are inadequate in the management of many common aspects of mental health.

Furthermore, there is a growing prevalence and significant increase in mental health disorders such as anxiety, depression, loneliness, anger and frustration in society. The basic structures of family and society are breaking down. There has also been an explosion of mental health issues in children. Covid exposed the woeful inadequacy of the current mental health situation to tackle this growing epidemic. In consideration of these worrisome trends, there must be a fundamental change in dealing with mental health. Childhood education must be scrutinized to determine ways to better teach and train children to thrive in our complex modern society.

Such a change must seriously consider the ancient way of understanding the mind and body. The writings of Yoga sutras, Vedas, Upanishads, and other bodies of literature in the Hindu knowledge systems clearly elucidate a highly evolved and well-developed discipline of the mind sciences. Numerous “rishis” experienced and further codified consciousness beyond the intellect and the mind.

Mind sciences encompassed in the yoga sutras include methods to access consciousness through meditation, pranayama (breathing techniques but much deeper than mere breathing) asanas (physical bodily postures) and various other aspects of a holistic and balanced life. Accessing this “Chitta consciousness” was the primary focus of many of the writings and schools. Methods to access the “Chitta consciousness” were elaborately discussed in the “Bhagavad Gita” and further codified by the rishi, Patanjali in “Patanjali Yoga Sutras”. These teachings were introduced into society through educational institutions at a young age. The contrast between this ancient way of teaching when compared to modern childhood education is striking. The growth of a child in the modern world mostly focuses on factual, intellectual, and data-driven pursuits.

The ancient way of upbringing envisions a holistic perspective of childhood education and encompasses a deeply disciplinary life including ritualistic study in Sanskrit, rote memorization and recitation of many shlokas in Sanskrit (there is ample data and evidence now that such recitations and incantations have beneficial effects in the intellectual growth and development of the brain), group and teamwork to learn many household life responsibilities, a deeply disciplined routine and daily schedule along with playtime, engagement with nature and reverence for the environment, fostering respectful relationships with elders, teachers and parents, deep respect and love for animals, physical fitness and self-defense practices.

Most importantly, there was an attempt to coordinate the rhythm of life with the cycles of nature and to be one with nature. Didactic education was not introduced until further mental and physical maturity of a child that was assessed by a Guru. The initial identification of a child was “aham brahamsmi” I am brahman to reinforce the concept that one is identified and is in unison with nature and the cosmos.

The most important skill that a child learns in such a model is the ability to control the mind and the emotions generated in that mind. The ancients realized that the emotions generated in the mind are like turbulent waves. They understood that the mind is an organ like any other organ in the body, and hence trainable. With the practice of deep meditation and pranayama and asanas of yoga, they were able to achieve control over the mind which further facilitated access to realms of consciousness beyond the intellect, the “Chitta consciousness.” They further realized and learned to refrain from sensory indulgences that distract from these pursuits. The concept of” Chitti Vritti Nirodha” or the elimination of the tribulations or waves of the mind is practiced. Such practices were introduced at a young age and became part of a child’s life and routine.

A suitable environment was created in and around nature called the Gurukula. Sahana Singh, an author on ancient Bhartiya history, recently published a book on ancient education in India, in which she details the various aspects of this educational system. In this system, there was no room for reductive thinking and chemicals-based management of issues of a child.

A modern interpretation of a few aspects of such a holistic educational system is the Sky Kids program by ART of Living. Sky Kids teaches and trains at-risk children, and children without any documented mental issues, methods to reduce depression, anxiety, and violence using breathing techniques and meditation. It fosters a sense of calmness and the ability to concentrate and focus the mind. Anatomic and physiological studies of the brain have shown that a child’s frontal lobe is the processing center of various inputs from sensory organs and external stimuli.

The growth and maturity of the frontal lobe is not complete during childhood. During this vulnerable phase of a child’s development, exposure to vast amounts of stimuli and information that is amplified by current technology without the necessary discipline and skill sets to navigate conflicting inputs, floods the mind with questions, confusion, and conflicts. Lack of clarity and agitation “chitti vritti” creates unrest, and unease and can lead to various behavioral issues which the modern health care system labels as ADHD, Major depressive disorder, and other psychiatric issues.

Most children would be well served with a holistic approach to education that includes meditation, pranayama, and asanas. Sri Sri Ravishanker proposes the correct prescription to live in a violence-free world, with a disease-free body, a clutter-free mind, and a trauma-free memory. The ancient mind sciences and methods developed in India through various Hindu darshanas (realizations) and eternal natural truths about life and human nature must be considered as part of the educational curriculum of a child. It is high time to reexamine and revisit these teachings in the modern context. It is time for modern society to have humility and shed arrogance and integrate the methods and evolution of education developed in ancient India.