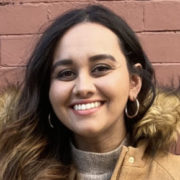 How Ramadan Became More Prayerful During the Pandemic

I’ve spent most of my life drawn to the over-the-top dramatizations of Bollywood. The colors, romance, poetry and dance that bring these movies to life enamored me as a little girl. Bollywood has always played a role in the relationships I’ve built, the art I’ve produced and the expectations I have set for my life. Unfortunately as I grew up, being excited by the new Bollywood movie release or listening to the latest Bollywood soundtrack was not considered “cool.” There was always a lingering sense of judgement from kids at school that would eventually push me away from my love for Bollywood, until I finally realized the power of my identity with it.

Growing up in an upper middle class Indian household, my story is probably very similar to yours. My parents left India to pursue greater opportunities and brought their culture, customs and values along with them. While I would consider myself a first generation American (because I was raised outside of India from the age of 6 months), I was born in India and am just as much an immigrant as them. The differences between my parents and myself are generational, but the one thing that glued us together was Bollywood.

I grew up knowing that on Sundays we would all be up and ready to watch “Namaste America” and “Showbiz India” (shows that gave updates on new Bollywood movie releases and played the top 10 music videos of the week). For two hours straight my parents and I would sit together and enjoy the vibrance of the colors on screen, exchanging comments from which new actress would become a star to which songs had the best choreography. This is where my love for Bollywood was cultivated.

I spent most of my childhood participating in different dance groups, be it classical Indian or modern contemporary styles. Alongside this, my family’s innate talent for singing had me spending my after school hours learning classical Marathi (language of the state of Maharashtra where my family is originally from) music as well. This left little room for me to be invested in American culture, music and dance. I would often catch myself lying to my friends when they would ask if I had heard the newest American track or had seen an episode of a show I was most likely not allowed to watch. This is where the divide between who I was and who I felt I needed to present myself as, began.

One vivid memory comes to mind when I think about why I started hiding my passion for  Bollywood and all that comes with it. I used to own an iPod Shuffle (do you even remember what those looked like?) and the problem was that there was no way of identifying which song would come next because it didn’t have a screen. My friend (also Indian) had the same issue.

After school one day my friend came up to me, visibly upset, and I had to wonder what had happened. She was the type of person who focused on school and yet still had a coolness to her that drew people towards her. It was rare that she would be upset over something little so I had to know. It was then that I realized the clear discontinuity between being raised by culturally immigrant parents and by those born and brought up in America. My friend had been listening to her iPod with a boy in our class who was caucasian (his family must have been of European descent, but for all intents and purposes he was American).

Unfortunately for her, she had a few Bollywood songs on her iPod and as she shared her music with him, a Bollywood song began to play. The boy immediately stared at her with confusion. He proceeded, with a muddled look on his face and probably out of curiosity, to chuckle and asked what song it was. My friend, immediately embarrassed, changed the song and left. While this interaction may seem small, the rush of self doubt you get when you feel that someone has judged you for being different, be it on purpose or not, is transformative.

The Indian culture is something that I am immensely proud of now, but for a while, especially in my pre-teens and teenage years, it was something that I felt insecure about. The need to be accepted and “cool” in school took over any pride and worth I felt towards my Indian roots, and that included Bollywood. Spending time with my friends discussing American pop culture, instead of practicing my classical singing. Refusing to wear Indian clothes unless my mother insisted on it. Using an American movie as my favorite when asked, instead of “Kuch Kuch Hota Hai.”

A Day on a Houseboat in Kashmir: A Mother’s Day Down the Memory Lane

These were just some of the ways I was changing myself to “fit in.” Small instances such as the iPod shuffle one created a huge gap between who I truly was and who I felt the need to be. As I made my way through college I met so many different people from different walks of life and understanding their cultural differences helped me further accept mine. The feeling to embrace my culture and my passions grew with me as I finally accepted and embraced who I was. I ended up becoming one of the Bollywood Dance team’s captains, TA-ing the Bollywood Dance class offered by the University of California, Santa Cruz and starting the first Bollywood Acapella team with a friend. I was driven by those same Bollywood songs that I grew up listening to with my parents every Sunday.

Today, I use Bollywood to push my creative bounds and continue to move the Indian culture forward in American society. America has come a long way with accepting different cultures, but there is still much more to be done and my hope is to bridge that gap in any way I can and I urge that all of you do the same. Own who you are and where you come from, play that Bollywood song loud and proud. There’s no greater way to be your most honest self.

Priyam Kulkarni is an Indian American marketing professional. Growing up in California, as a member of several cultural organizations, Priyam has spent most of her time focussing on her creativity in music and dance. Now based in New York, she is a Field Marketing Manager for North America for AppsFlyer, a technology company.