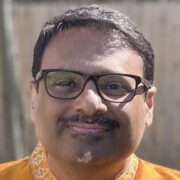 “Now what I’m saying is this: I would like for all of us to believe in nonviolence, but I’m here to say tonight that if every Negro in the United States turns against nonviolence, I’m going to stand up as a lone voice and say “This is the wrong way,” thundered Dr. Martin Luther King Jr., in his speech to a gathering, following the summer of 1966 as the nation lay under the siege of race riots.

Having been invited to speak at the Martin Luther King Jr. prayer service at St. John’s Missionary Baptist Church in Indianapolis on Monday, January 16, 2023, I couldn’t help but wonder what could be more befitting to this occasion than to talk about how Hindu teachings of nonviolence and the supreme truth that all beings are equal by their inherent and potentially divine nature. It is an honor to speak from the same podium where the likes of Coretta Scott King, Dr. Kelly Miller Smith, and Dr. Martin Luther King Jr. himself spoke.

Dr. King’s “intellectual pilgrimage to nonviolence” began when he was only a teenager. Although he was born into comfort and security, he sought to investigate the reasons and consequences of injustice firsthand, by working during summers. These early experiences taught him that injustices are of many kinds. Racial injustice is just as evil as economic, “poor White was exploited just as much as Negro,” he discovered.

While studying at Crozer Theological Seminary in 1948, Dr. King spent a significant amount of time analyzing the works of several other influential thinkers —Walter Rauschenbusch, Karl Marx, Lenin, Friedrich Nietzsche, AJ Muste. Dr. King concluded that he couldn’t completely agree or disagree with their philosophies. Whether any of these theories are an ideal instrument, moral and practical, in bringing social reform, Dr. King’s answer was, “partial yes and a partial no.” An answer which led him to despair and almost question his faith in love and its power to resolve social problems, until one Sunday afternoon when he heard a sermon by Dr. Mordecai Johnson. Dr. Johnson spoke of the life and teachings of Mahatma Gandhi. Dr. King, who had only heard of the Mahatma until now, found the message so “profound and electrifying” that he decided to begin studying Gandhi’s campaigns of nonviolent resistance.

Mahatma, which means “a great soul,” a title is given, and rightly so, to the one who realized the great powers of nonviolence and truth, ‘Satya.’ Truth is love and beauty. The power of truth is ‘Satyagraha,’ Mahatma Gandhi’s moral and practical instrument to achieve social reform.

Mahatma Gandhi was born in a Hindu household and was deeply influenced by the religion’s emphasis on ‘ahimsa’ or nonviolence which holds that all living beings are interconnected, and that violence against any being is ultimately violence against oneself. During his prison years, Mahatma Gandhi unremittingly labored to read as many translations of the Bhagavad Gītā as he could lay his hands on and then wrote a commentary — “The Bhagavad Gītā, according to Mahatma Gandhi.” The Gītā became an unfailing companion in his darkest hours and a supreme source of strength, inspiration, and moral guide. The Mahatma called the Gita “my eternal mother.”

Although Dr. King was a student of Christian theology at the seminary, he did not reject Mahatma’s philosophy only because it came from a different religion. Instead, he sought to find resonances between Mahatma Gandhi’s Hinduism and his interpretation of Christianity. Indeed, Mahatma Gandhi’s movement in India gave Dr. King a 20th-century version of ‘What Would Jesus Do.’ Dr. King patterned nearly all the strategy and tactics of the Civil Rights Movement—from boycotts to marches and even welcoming imprisonment—after Mahatma Gandhi’s leadership in India. Dr. King called Mahatma “the first person in history to lift the love ethic of Jesus above mere interaction between individuals to a powerful and effective social force.”

A decade after Mahatma Gandhi’s death, Dr. King traveled to India in 1959. He was surprised and inspired to meet Indians of all faith backgrounds working for equality and harmony, discovering in their traditions the same inspiration for love and peace that Dr. King found in Christianity.

Thus began Dr. King’s first step on a long journey of learning about the shared social justice values across the world’s religions and partnering with faith leaders of all backgrounds in the struggle for Civil Rights. Dr. King’s experience with religious diversity in India shaped the rest of his life.

Unfortunately, Dr. King’s efforts, although successful in abolishing discriminatory laws, are yet to eradicate discriminatory attitudes. Attitudes of dislike, distrust, and even hate of others based on religion, ethnicity, or nationality, still prevail over human nature. Dr. King believed that “man must evolve for all human conflict a method which rejects revenge, aggression, and retaliation. The foundation of such a method is love. “Love for all humankind as if the whole world were to be one family; ‘Vasudhaiva Kutumbakam.’

Profiles in Courage Amid Chaos: The Inspiring Ordinary People I Met on My Recent Visit to India

Just as nonviolence was effective as a form of protest against discriminatory laws, what Hindu principles help eliminate attitudes of discrimination?

One of the fundamental teachings of Hinduism is that all beings are divine. All beings manifest the ultimate reality, which is also the ultimate source of all existence, Brahman. The highest virtue is practicing love and respect for all due to their inherently divine nature. We all can weed out conscious and unconscious biases to welcome love into our hearts and behold the beauty of genuine brotherhood. For it was not in Dr. King’s nature to resign to the notion that, “the ‘isness’ of man’s present nature makes him morally incapable of reaching up for the eternal ‘oughtness’ that forever confronts him.”

In his acceptance speech in Oslo in 1964, while accepting the Nobel Prize for Peace, Dr. King reminded the world that the movement had not yet won the peace and brotherhood which is the essence of the Nobel Prize. Therefore, Dr. King would act as a mere curator of this award, to hold it in trust until humankind rids itself of all forms of discrimination, and it is then handed to its rightful owners: “all those to whom beauty is truth and truth is beauty.”

J.R. Sandadi is a long-time Carmel, Indiana resident. He migrated to the U.S. in the early 1990s and worked in the IT sector for 25 years before retiring from the corporate world. He volunteers his time with Hindu SwayamSevak Sangh (HSS, USA), and Sewa International USA. Sandadi is also involved with multiple interfaith initiatives across Indiana. He is a founding member of the Indiana Multi-faith Network.