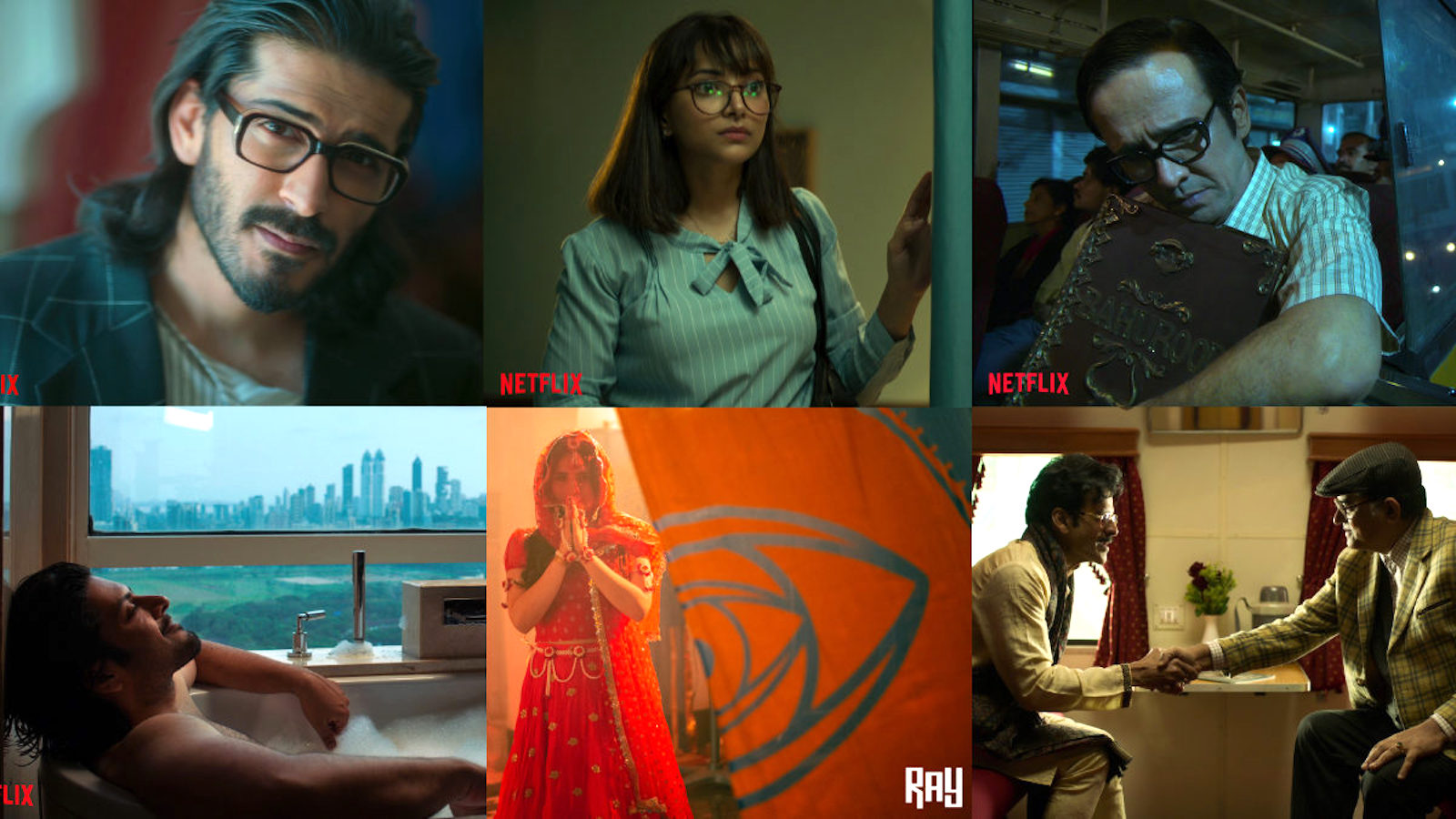 I was delighted to watch the anthology, released on Netflix/India recently. This is a cinematic homage by three filmmakers to the Oscar-honored giant Satyajit Ray on his centenary. The anthology is created by Sayantan Mukherjee, produced by Ajit Andhare (Tipping Point and Viacom18 Studios). Three talented directors Srijit Mukherji, Vasan Bala, and Abhishek Chaubey explored Ray’s complex narratives and produced four shorts during the COVID pandemic. The thread that holds these four dissimilar stories played by Manoj Bajpayee, Ali Fazal, Harshvardhan Kapoor, and Kay Kay Menon, is the blistering anguish of the male protagonists. Women characters serve in supporting roles but often hold the winning hand.

The first film is “Forget Me Not,” based on Bipin Chowdhury’s adaptation of Ray’s “Smritibhrom” by Srijit Mukherji. Mukherji is a consummate filmmaker. His first film “Autograph” won 41 awards in 2010 (an ode to Ray’s 1966 classic, “Nayak“). He interprets the Bengali word about an elusive memory to perfectly recreate his invincible character Ipsit Nair. I like the name Ipsit, as much as I love the reference to the blue flower of the same name.

The movie poster and opening shot pulled me into a vertiginous intrigue reminiscent of Alfred Hitchcock’s 1958 psychological thriller. I recognized Ali Fazal immediately from his performance as Guddu Pandit from the series “Mirzapur.” He is perfect as a macho man on the verge of making his first billion with his company Chrysalis. A whiz with numbers, a sharp strategist, towering head and shoulders above everyone. Cutting people short. Curt and dismissive. Patronizing. He is focused on conquering the world. So wrapped up is he in his bravado, that he forgets that every mighty warrior has an Achilles heel.

His self-confidence is thrown off by a young girl on a rooftop bar who reminds him of a rendezvous in a hotel in Aurangabad and their trip to Ajanta Ellora caves, complete with chocolate truffles, a midnight swim… Ipsit does not remember anything. He just brushes it off as a mistaken identity but his office staff seems to corroborate his trip to Aurangabad. There are bills. Conversations. Hotel bookings. Nair is flummoxed. It seems like he is suffering from early-onset dementia. The memory lapse weighs on his nerves. He slowly loses his mind. Wrecks his car, shows up late for a meeting. Creates a scene in front of clients.

When he leans upon his secretary Maggie for support. She reminds Ipsit of their affair, followed by her abortion. His wife overhears this sordid tale. He loses everything. An invincible man is left alone in a mental asylum on a wheelchair with a blue bouquet forget-me-nots in his lap. The blue flower, a symbol of love and fidelity becomes his nemesis. The film could have been improved in a subtle telling but regardless it is a chilling reminder that a man who succeeds with the help of his team can be brought to his knees if they form a liaison against him. Ipsit employs his classmates in his company but robs them of their dignity. But the man who can remember everything forgets that he gave his passwords to his employees, and they have access to his recycle bin.

The second short “Bahrupiya” is also directed by Srijit Mukherji: inspired by the same Bengali name Bahurupi. The story is about Indrashish (Kay Kay Menon) a plebeian office employee who is mistreated by his boss, landlord, and girlfriend. He inherits money and a valuable book on the art of makeup and disguises passed down to him by his grandmother. Sorely disappointed by his misfortunes, he decides to turn the tables on his associates. One by one, he gets even with his tormentors. No one can recognize him. His success goes straight to his head, like a heady local wine. Now his ego is thrumming from a God complex. He tries to expose a face-reading baba by appearing in his presence in different getups.

Every time the baba gives him a blank paper. Your face is blank, I am not able to read it, is obsessed with proving the all-knowing Baba wrong. Indrashish keeps asking again and again. The seer reminds him that Ghalib kept making the same error. Dust was in his face, he kept cleaning the mirror. Indrashish assumes the identity of Rakesh Singh as an absconding rapist. You are a good person. Get yourself treated. It was my duty to give you another chance. You think of yourself as God. Does Indrashish heed the holy man’s words before it’s too late? Or does his face freeze on him?

The third film is “Hungama Hai Kyon Barpa,” a ghazal written by Akbar Allahabadi and sung famously by Ghulam Ali  showcases a chance encounter between two men on a train. It is based on Satyajit Ray’s short story “Barin Bhowmik-er Byaram” with a travel twist. Abhishek Chaubey, is a childhood cinema buff, must have had a blast making this film. It is told in a neurotic first-person narrative but has humorous universal insights. The film can be sipped like aged fine wine. I have added it to my childhood repertoire of favorite tales and will watch it many times. The two people are the shifty-eyed but self absorbed hair-flicking, Musafir Ali played by the brilliant actor Manoj Bajpayee, and Aslam Beig. Beig is a sports writer, formerly, a competitive pahalwan, Jenga of Padpadganj.

It is a deja vu moment. They do not remember where they have met before. But they have a long journey to reminisce. Ali introduces himself as a poet and Beig played by the inimitable Gajraj Rao admires his artistry, completely unaware about the intricacies of the Urdu language. He gleefully misquotes famous couplets and blames Ali for stealing the adulation of his wife. Kal chaudavi ki raat thi… etc. Ali baulks at his mispronunciation of Paikhane me instead of paimane mein… But Ali is smitten by Beig’s admiration and waxes prolific. Main talkhiye haalat se ghabra ke pee gaya. He shows off a valuable ring bequeathed to him by the famous ghazal maestro Ghulam Ali.

Beig starts talking about his life, Ali’s memory is nudged by Beig offering him lemon rinds and cumin in hot milk. The poet remembers a previous train journey when he stole the Auspicia (khushbakht) gold watch, the watch that does not tell time, but augurs in good fortune. Beig laments that ever since the thief stole his pocket watch, his time and destiny have changed. Wonderful cinematography shows the moving train, internal conflicts, applauding fans, the gold watch swinging like a pendulum, the clock ticking in Ali’s bag like a time bomb, the train compartment transformed into a clock face. Ari yeh ghadi kaise gale mein padi! The two men keep drinking.

Now when Abhishek Chaubey has garnered the full attention of his audience he reveals the backstory of Ali’s Kleptomania. Ali is overcome by guilt and gives the pocket watch back to Beig after ten years. But the story does not finish here. Beig runs after Ali on the railway platform and asks him to return the watch to a shop Rooh Safa in old Delhi, near Mirza Ghalib’s chaat house. Ali meets a curious antique dealer played effortlessly by Manoj Pahwa. Here he finds other eclectic treasures like Satyajit Ray’s original red handbound manuscripts, Mountbatten’s pyjamas, Dara Singh’s gold medal, and Ghulam Ali’s ring. The unexpected twists and turns remind me of Dedh Ishqiya Ali’s allusion to time as ‘kutti cheez’ rings true! Finally, Lady Time catches up with all great thieves. Great films draw deeply from life experiences, and this film bears witness to Choubay’s depth. I will always remember Hungama Hai Kyon Barpa in more ways than one! I am certain Ray himself is smiling down upon him.

Storytelling and cinematography are different in the fourth film “Spotlight.” Vasan Bala gives an innovative interpretation of Ray’s story about star attractions and blind faith. The “Mard Ko Dard Nahi Hota” director starts with a Ray quote about improvisation (when Ray had translated his grandfather’s illustrated fable to make “Goopy Gyne Bagha Byne”) and jumps into a radically different arena. It is a preposterous farce about an entitled movie star (Harshvardhan Kapoor) known for one iconic facial expression or look: One look Kapoor, and his existential crisis on meeting a God-woman who usurps the plush hotel suite.

The actor seems to lose his mojo when the spiritual performer and her blue-streaked pantheon shows up and steals not only his plush hotel suite but also his show. The Didi played by the talented Akansha Ranjan is very comfortable in her skin and uses psyches One look Kapoor into masterminding her escape. shoe ad # go far. Spotlight is visually exciting. Eeshit Narain’s camera follows the repeated and unexpected scenes in the narrative. Chandan Roy Sanyal as Robi Ghosh is delightful as the witty manager with his aphorisms involving Ryan Gosling and Elon Musk. He reminds the hero that he began his journey with a shoe advertisement. Didi ke darbar me and the mad rush to receive holy water from her feet, adds to the frenzy. “Spotlight” is a scary reminder that religion ultimately is the biggest con!

Satyajit Ray, a magical lyricist, composer, writer, calligrapher, artist, and filmmaker beyond comparison. He also wrote many short, complex, and surprisingly witty stories — published in sets of 12. He was self-taught, did 90 percent of the work on his films himself. He learned everything on the job. He was analyzing every rule and breaking it. Always improvising. “Dada Moni,” the celebrated movie maker, received his Honorary Oscar in his hospital room for his classic “Pather Panchali.” This anthology may not bring home an Oscar but it pays a wonderful homage. It may be easier to watch the anthology stories one at a time because they are very dissimilar. My favorite was “Hungama hai kyun Barpa.” This film has a literal, poetic, and metaphorical message. Daka to nahi dala, chori to nahi ki hai, gives the story away but in such a poetic manner. The other stories are more melodramatic, minimalistic, and zany.