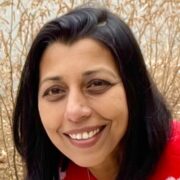 Since 1980, Deepti Naval has carved a niche for herself in Indian cinema, winning critical acclaim for what has been called her “sensitive and close to life” portrayals that emphasized the changing role of women in India.

A firm believer in evolution and growth, she has changed roles herself, never remaining still — forever growing, forever evolving, forever learning. “A Country Called Childhood,” (Aleph Book Co. 2022) Naval’s memoir, chronicles her life from the day she was born, through young adulthood.

At a time when fiction is perhaps increasingly becoming hyper-intellectual or dystopic or unreal, as consumers of content, we are hungry for the real. For facts. We are seeking the lived experience. We are seeking true stories. At the same time, the digital media culture has us becoming confessional, and oversharing is becoming the norm.

So, how do you write a memoir? How do you write about yourself or the people you love without betraying either? And how do you find your authentic self and authentic voice? Naval’s memoir has been able to do all of that and more. It is quietly confident about what is meant to be written and what might be kept private. It opens the door and welcomes you into childhood. Naval’s childhood. My childhood. Your childhood.

We meet Deepti Naval on February 3, 1952 – the night she was born in Amritsar in newly independent India. At once, we are transported into another time. A time when perhaps our own unconventional parents or grandparents might have interacted seamlessly with her unconventional parents, playing gramophones and radiograms, supporting their daughters’ dreams, favoring education and lifelong learning above all else; embracing those who had little or less; a Hindu family living peacefully in a huge house with a masjid right behind it; generously hosting the neighbor kids and streams of nieces and nephews; offering copious lectures on hygiene to the captive audience of young urchins who used the drain out back as their personal toilet. All this, and more, until she moved to the United States in 1971.

How difficult is it to write these personal stories? How does one know to trust one’s memory? Which memories should one go back to? Memories of our childhood tend to be specific – sounds, sights, smells. But Naval might have taken it a step or two further.

The anecdotes, the ups and downs, the details of sisterhood, of friendship, the vivid accounts of neighborhood streets, the feel of granny’s muslin, the palpable feelings of birth and death; the excruciating detail of three flights of dark stairs down to the bathroom. The book reads like a screenplay, and Naval confirmed she intended it to be so that we may walk with her “through those corridors of memory.”

As an example, she skillfully evokes the mood and atmosphere of a particular time and place. Her rendition of her mother cleaning her ears with a cotton swab dipped in hydrogen peroxide will have you perpetually feeling the coolness of that liquid in your ears.

The Nheri plays a recurrent, poignant role in the story. What might just be a sandstorm for some, is a vivid cinematic experience for Naval as a little girl. It is dramatic, awe-inspiring, beautiful, and devastating, all at the same time.

Much of the book is set in Amritsar, and many have called the book her love letter to Amritsar, Ambershire, Ambarsar. But she grew up in what she calls “a looming four-storey structure” with hidden staircases that satiated her appetite for both mystery and history.

The house, bought by her paternal grandfather, was built on “a large 500 square yard plot on the outer edge of the walled city.” This is Chandravali House, where she finds herself when her memories take her back. One can’t tell whether Naval carries the house with her, or whether it has its place in another time.

She talks about the first time she felt empathy – she was four years old. She talks about a maulvi – muezzin – returning to the mosque behind her house for the first time since Partition in 1947. She distinctly remembers Azaan – the morning call to prayer as Chandravali House begins to stir and windows start to open. Not in irritation or anger or intolerance– but personified in her mother’s voice, “Hai, how beautiful!”

Her father speaks of impassioned sermons over loudspeakers in the past – of crowded prayer services at the mosque. “But their prayers never clashed with our havans,” he says. A poignant uttering for the time. And even more poignant today.

The young Naval learns about Jallianwala Bagh and wars because her parents chose to speak to her candidly about those events. We learn that’s the home she was born into, and the India she grew up in.

We learn her parents were ahead of their time. However, living in these so-called “ahead times” one wonders if their generation – the greatest generation, was in fact really OF their times and not necessarily ahead. Naval says excavating who they were, where they came from, what made them, their history, and in turn, the evolving history of a country is what she came to find as she wrote. And this is what is revealed to us as we read.

“A Country Called Childhood” has universal appeal. As I sat talking with Naval in front of an audience of fellow South Asian immigrants, I realized our childhoods and our countries are inextricably linked. We carry them with us, but we can’t return to them in the exact way we left them. We yearn, we miss, we remember. Naval captures well that ‘wheels up moment’ when her aircraft left Indian soil. We immigrants have all experienced that moment.

In her memoir, a newly independent India comes of age along with Deepti Naval. There are several historical references and mentions of happenings that impacted her childhood and that provide the reader with a very relatable descriptive insight into those turbulent times.

Through her writing she manages to get the reader to understand or believe or think that we are in her head, looking at life from her point of view. Understanding this is not objective history, but a slew of memories. Hers, theirs, ours. Naval leaves us wanting to read and re-read, remember, and as Toni Morrison said, re-remember — returning again and again to parts of the story that are so uniquely hers that they are universally ours.

Niharika Chibber Joe is a United States civil servant, working on U.S.-Japan relations. She is also a prize-winning published poet and short story writer. Most recently, her work has been published in Millennium Poesy (2021), Earth, Fire, Water, Wind (2021), Lockdown Prayers (2021), Paradise on Earth: An International Anthology (2021), The Body of Memories: A Collection of Memoirs and Personal Essays (2021), The Silk Road Anthology (2021), In All the Spaces: Diverse Voices in Global Women’s Poetry (2020), the Setu Online Literary Journal, and in Different Truths – a global participatory social justice platform. Niharika serves on the boards of YUVATI (Youth Under Voluntary Action for Transformation India), and the DC South Asian Arts Council, where she is a regular panel moderator. She holds an M.A. in International Relations from the Johns Hopkins University’s School of Advanced International Studies in Washington, D.C., as well as an M.A. and B.A. in Japanese Language and Literature from the Jawaharlal Nehru University in India.