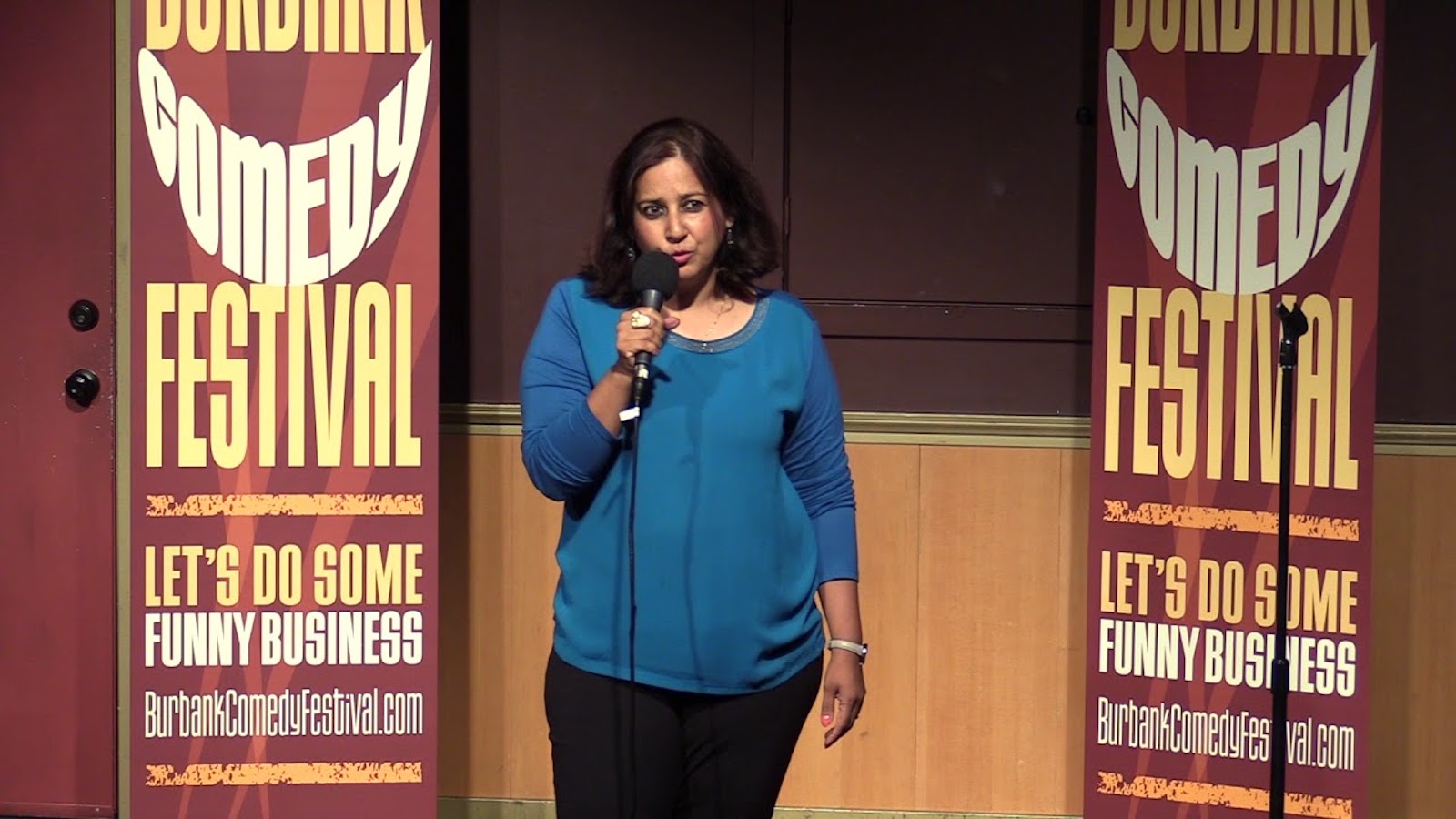 Serykah Aggerwhil is not a household name, yet. But this management consultant-turned stand-up comic-turned actress is definitely on the path there. Aggerwhil whose credits include “Can’t Breathe” (2018), “Curd” (2019) and “Upload” (2020), chatted with American Kahani about her comedy, acting and switching gears. Serykah, who moved to the U.S. after marriage some 30 odd years ago, started doing comedy more out of necessity. She became tired of being the target of jokes by her family of comedians … so she came up with witty comebacks “that straightened them out!”

Both her husband, Raajeev Aggerwhil and son, Neil are regulars at comedy clubs in Los Angeles. Although her husband runs an IT company by day, Aggerwhil says, “just like people play golf for fun, he does comedy!” As to her foray in the art of making others laugh, this mama to three grown sons says, “At first, I wasn’t sure about comedy, but then I took the plunge, got on the stage and absolutely loved it.”

She has a 25-year-old, a 21-year-old and her youngest, who is about to start at University of California Santa Barbara in fall 2021, who are all for their mom changing lanes from management consulting (which she still does today) into acting. “My boys and husband have been very supportive of my new found love. My oldest son, Raeshib is a filmmaker from USC (he has worked with well-known Indian actor-director Shekhar Kapur) and so totally understands my love for the stage and the camera.”

Gushing about her love for the stage and acting, Aggerwhil says, “I took to it like a fish to water. I have been doing comedy for almost 8 years now and then fell into acting. I love the craft of acting. Acting is very satisfying…to be able to portray a character, someone’s vision, is the best feeling ever.”

Aggerwhil’s short film “Curd,” directed by Varun Chounal was showcased at the Los Angeles Asian Pacific Film Festival. Starring Serykah Aggerwhil and Diana Caban, the film centers around Hira (Aggerwhil) who is visiting her son in the U.S. Unable to spend time with her because of his busy schedule, Hira is left alone to her own devices, feeling trapped in his house.She struggles with an alien culture and language. Following a botched dinner preparation, circumstances compel Hira is to take her first steps towards assimilation.

As to how the movie fell into her lap, Aggerwhil says, “Chounal was finishing his thesis at Marymount University. He wanted this movie as his submission for his visual communication program. He was looking for Indian American seasoned actors. I auditioned and I got the part.” Talking about the role further, Aggerwhil says, “The role resonated with how I felt when I first came to this country. Things were so different then. Things felt so strange to me when I first came here. There was no social media, an extended Indian community. Basically, it was just your husband and you. The role of Hina brought all those feelings to the fore front.” She adds, “In India, the culture is neighborly. One goes to their neighbors, chats, become friends. Here in the U.S., there are all these cultural boundaries. And I noticed these differences when I came here. Like Hina, I too felt isolated. That’s why I felt close to the character and it was an honorto step into Hina’s shoes.”

Originally from Nasik, India, born in Calcutta, Serykah was named Supriya by her parents. “I had a very Bengali name. It was modified numerologically about 12 years ago.” “My old friends from school and college still call me Supriya,” she says laughing. Suggested by her spiritual guide to bring her good luck in her new found career, Serykah also changed her last name from Aggerwal to Aggerwhil.

There may have been something to it because Aggerwhil landed an episode in the Hollywood science fiction comedy-drama television series  “Upload” (2020) created by Greg Daniels (“Saturday Night Live”, “The Simpsons”, “Parks and Rec” and “The Office” etc). “It was a brief scene, but I got to work with the great Greg Daniels himself when I did the scene.” Aggerwhil, a regular at comedy clubs in Los Angeles, also has a Super Bowl Google commercial under her belt as the guacamole lady.

She also stars in “Couples at War ” with her husband, comedian Raajeev Aggerwhil on You Tube, that centers around an immigrant couple that outsources their arguments, A quick and cost-effective alternate solution to traditional marriage counseling. “With the pandemic as auditions were few and far between, and movies and TV were shutting down, we started our own content.”

As to the future for Indian Americans in mainstream Hollywood, Aggerwhil says, “Our time has come. This is great to be Indian American in the media. All our (Indian Americans) struggles are now over. We are in many award-winning shows and movies, some of us have won Oscars. I can see many more following in their footsteps. We were underrepresented for a long time. But with streaming platforms like Netflix and Amazon Prime, the immigrant story has to and is being told.” And if acting had never happened, Aggerwhil says laughing, “I would have been living a very boring and monotonous life!”