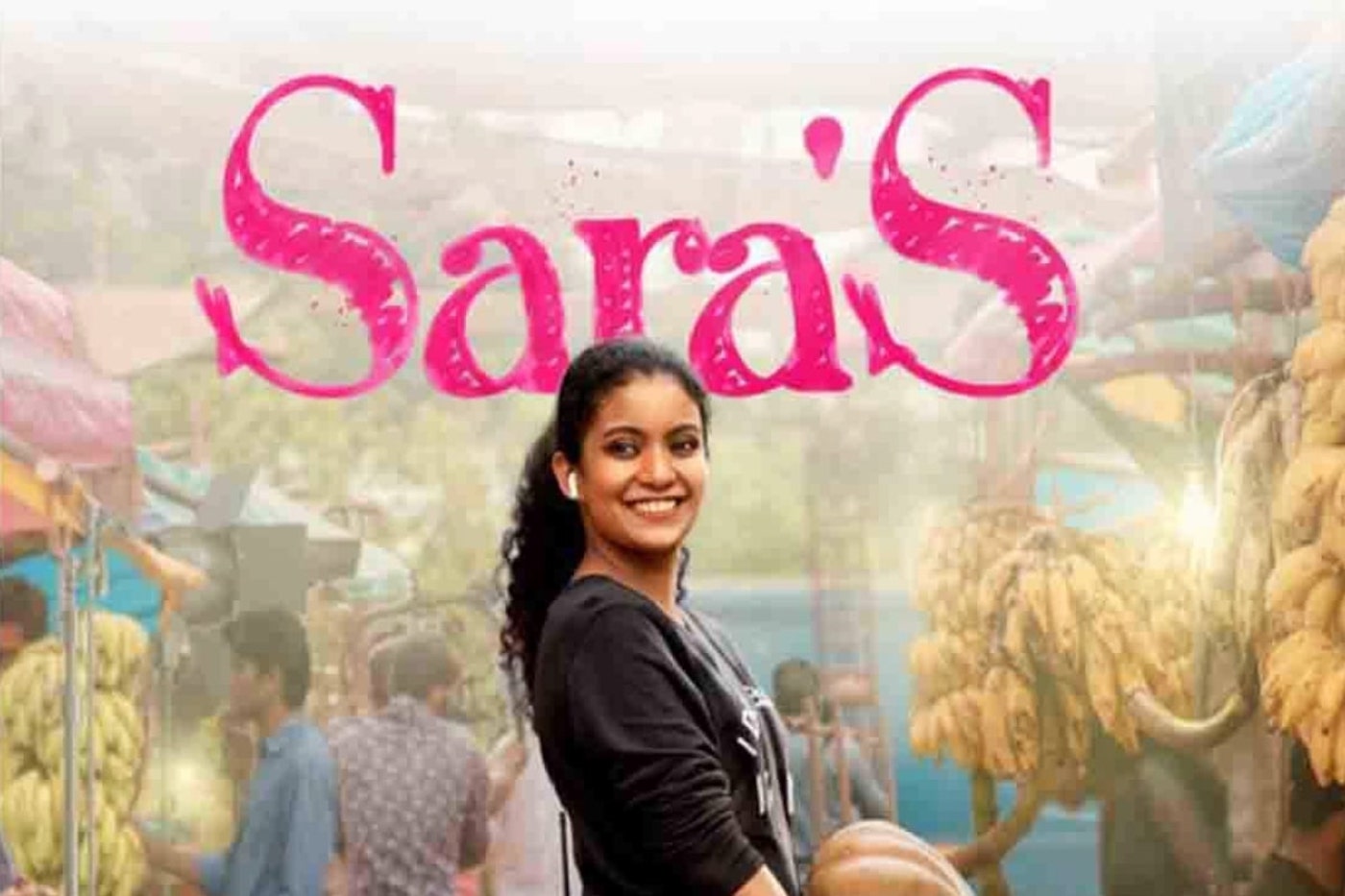 The Magic of Dilip Kumar: My Memories of the Man, Actor and Legend

I don’t claim to be a Malayalam film connoisseur, but when netizens were raving about Jude Anthany Joseph’s “Sara’S”, I had to check it out (thank God for subtitles!). In a film industry that has vilified women who don’t want kids tremendously in the past, at the risk of sounding cliched, “Sara’S” is definitely a breath of fresh air. Jude Anthany Joseph’s latest release examines the controversial topic — a woman’s right to abortion.

In “Sara’S”, Joseph tells the story from the woman’s perspective Given that the film revolves around a woman’s right to abortion, I guess there is no other way of telling this tale. This is Sara’s decision and we get to experience this through her eyes. So, here’s the gist.

Sara Vincent (Anna Ben) is a focused, single-minded career woman — which is his trademark style. A happy-go-lucky girl, Sara has always been clear that she never wanted kids, even at the risk of losing numerous boyfriends, when she shares her “radical” ideas on motherhood with them. After all, a woman’s job is to procreate, right?

In one scene, Sara even breaks up with her boyfriend when the two of them argue over her unwillingness to have kids in the future. They are eating egg puffs in this scene, and the camera tellingly focuses on the fallen egg. The question left hanging in the air is, can Sara ever be seen as anything more than a baby (egg) producing machine?

Sara, an assistant director by profession sure seems to think so. A daddy’s girl, Sara is a modern-day woman who harbors a dream – to be a filmmaker in her own right. And no dirty diapers will derail her future. An only child, Sara is blessed with a happy family that supports her at every turn, strangely except when it comes to her marriage.

Screenwriter Benny P Nayarambalam, Ben’s real-life father, also plays her on-screen father in the movie. He wants to be the ‘woke dad’ who backs his daughter’s dream of becoming a filmmaker but gives her a six-month deadline to find a suitable boy for marriage. After six
months, he says, he will be forced to pick a boy for her. Maybe he’s worried that his daughter is already 25, and her prospects in the marriage market are limited. So much was for his progressive outlook.

But, six-month deadline aside, Sara meets and falls in love with Jeevan (Sunny Wayne), who shares many of her ideas about life, including her decision not to have kids. Jeevan, an overgrown kid himself, sees kids as an unnecessary nuisance to one’s life. Love, life, and wedding happen, and with them come the inevitable – societal pressures to conform. And to top it all an “accidental” pregnancy…a “contraceptive error”, as Sara is quick to point out. Will she decide to keep the child at the cost of her dream of finally becoming a filmmaker. Or will she abort the fetus? I guess you will have to watch “Sara’S” to find out.

This is a recurring reference in the film, brought up at different junctures. Sara certainly believes that the answer is “yes” and has no intention of getting caught in the baby trap. But can that be so easy in a society where marriage and motherhood are considered mandatory for women?

Writer Akshay Hareesh has done a commendable job, keeping the humor mild with peripheral emotional connection to characters. In a scene where Sara questions her mother-in-law as to what she gained by raising two kids her whole life and leading a lonely life, the film speeds on without giving us an over-simplified, complicated answer, letting the narrative do the talking instead. In yet another scene where Sara is asked to clean a sussu (urine) floor by her to-be mother-in-law, whom she is meeting for the first time, her response (and you have to watch the film) shows that the director and writer let the narrative take the course without trying to complicate things.

And that’s how the film deals with the crux of the plot as well. Without melodramatic dialogues or preachy statements, the film delves on the concept of “her body, her choice.”

But Sara’s life is no smooth sailing. “Sara’S” is populated by a number of ‘progressive, non-sexist’ men – much like real life. For example, Sara discovers popular film actor Anjali has quit cinema to attend to her duties as a wife and a mother. She seems to find happiness in her everyday chores at home and chooses little moments with her family over an offer that can fetch her a National Award. Or at least that’s what she tells herself.

Hareesh seamlessly navigates Sara’s story through the cesspool of blatant misogyny and this sort of casual sexism. When men support women to pursue their dreams, it always comes with a set of terms and conditions. In case there is an impasse, it is up to the men to decide what’s best for women. The ironies in this film need no explanation.

As much as this film is Sara’s story, it is also the story of her husband Jeevan. When Sara accidentally gets pregnant, she treats Jeevan with contempt for reneging on his earlier convictions. Jeevan, who never wanted to be a father, has now mellowed, matured, and wants to keep the baby. It is not an easy decision for Jeevan and it is supposed to be an emotional roller-coaster ride for him. But the film hardly makes an effort to let us in on Jeevan’s heavy thoughts and emotions.

Here is my slight issue with the film.

“Sara’S” is not the typical fall-in-love-and-live-happily-ever-married story. Even though the movie talks about a sensitive matter about a woman’s right to embrace motherhood, it takes a light-hearted approach to make its point. This approach works to a large extent because the message it tries to deliver never gets preachy which comes as a breath of fresh air. The film doesn’t try to showcase motherhood as a burden but it allows one to introspect on the sacrifices women have to make to raise kids. It also talks about how patriarchy has made raising kids solely a woman’s job as the men are the breadwinner. There’s also a line about misunderstanding choices for feminism which is how, unfortunately, most perceive it today.

“Sara’S” also shines a spotlight on the discrimination of women in the film industry. From being turned down to direct her own script because of her gender, or being asked to trade sex for production money to being told that her duty, like that of most women, is to eventually have kids and raise them, the film doesn’t hesitate to address uncomfortable questions. Refer back to the powerful sub-plot about the veteran actress wanting to make a comeback but waiting to be permitted by her husband to don the greasepaint again.

There’s another interesting subplot involving a male gynecologist with a better sense of understanding motherhood than most men when he tells Jeevan that it’s “her body and her decision alone” or when he advises a fourth-time aging, tired mom (whose Catholic amorous husband doesn’t believe in contraception and looks at every child as a blessing from God) to stop this cycle of pregnancy by any means necessary.

While the charming Ben carries the film expertly on her shoulders, the supporting cast does a decent job.

The major drawback of “Sara’S” is that every character in this film is agreeable to a fault. The conservative setting, the outdated belief that women don’t need a life outside family, and hardliners in Sara’s family, who believe in women’s traditional roles, fail to create any dramatic tension in the narration. Would have loved to see a little khit-pit.

The film also suffers from an affliction that is common with many female-led stories. The makers feel compelled to show “different” kinds of women making “different” choices that are right for them. The idea behind it is to not project only one kind of life as emancipatory, but what this also does is to fracture the focus of the story, and distract attention from the central character’s convictions and interests.

That being said, “Sara’S” works as a much-needed conversation starter, presenting an offbeat, difficult theme in a mainstream wholesome fashion that can be watched comfortably by everyone in the family room. Definitely a watch in my books.

“Sara’S” is streaming on Netflix.