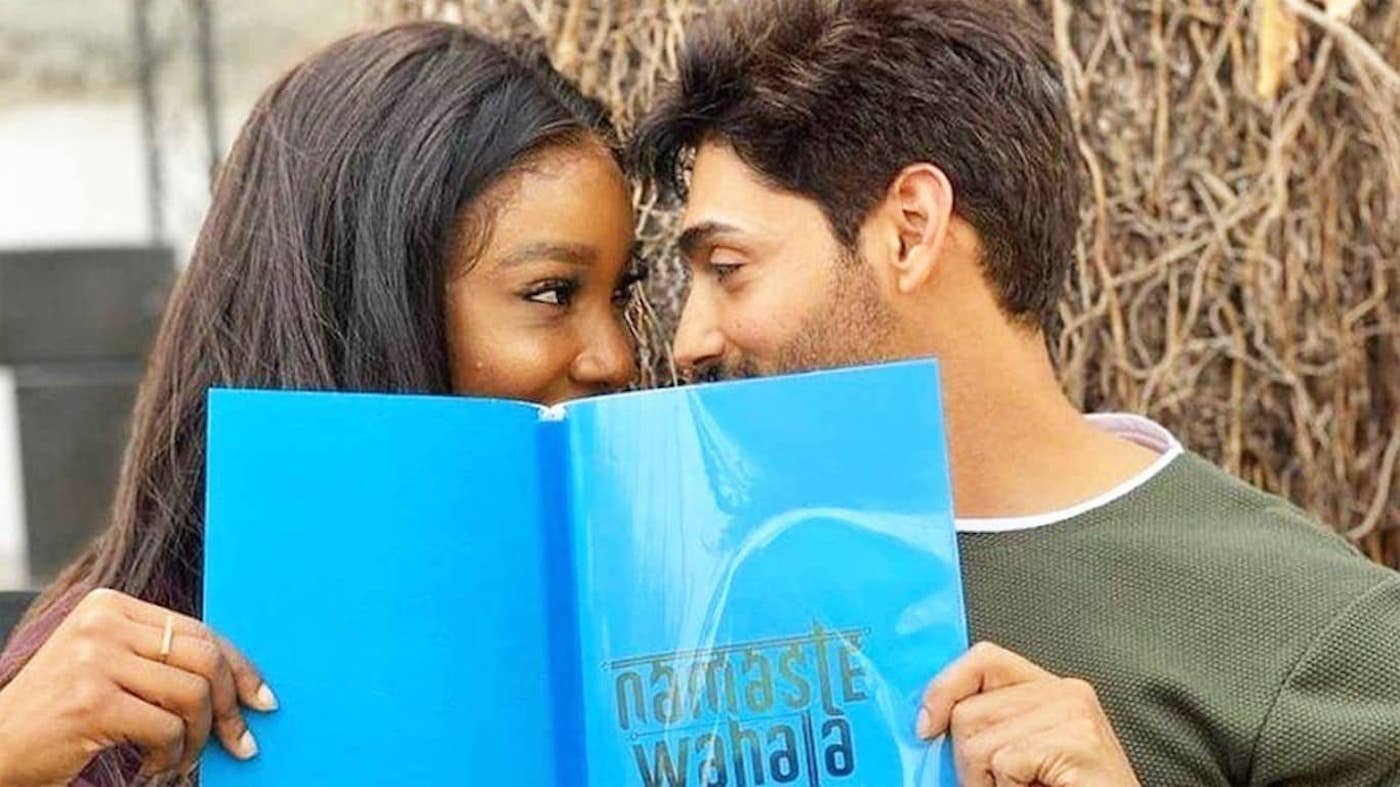 For anyone looking for a new rom-com this Valentine’s Day, like I was, “Namaste Wahala,” the Indo-Nigerian cross-cultural romance, may have been just the ticket.

However, “Namaste Wahala,” written and directed by newcomer Hamisha Daryani Ahuja left me far from satisfied. In typical Bollywood masala stereotypical style, boy-meets-girl on the beach, aankhon hi aankhon mein pyaar hota hain, boy and girl wish to wed, parents, in this case Nigerian dad and Indian mumma become the villains forbidding it, cultural hurdles occur, throw in some catchy Caribbean and Hindi toon inspired naach gana and you have an average movie, and I am being kind.

Here’s the plot. Handsome Indian investment banker Raj (Ruslaan Mustan) tells pretty Nigerian lawyer Didi (Ini Dima-Okojie) that she is the girl he’s going to marry, ten minutes after meeting her!!! Even in an instant gratification world, that’s too quick.

In this masala khichdi, social status isn’t the issue, as is in most Bollywood fare in the same vein – culture is. Both the families are super-privileged and invested in looking their Sunday-best even when they roll out of bed on a Monday morning.

The dramatic conflict begins when Raj’s mother Meera (Sujata Sehgal) lands up at her son’s doorstep (after a lengthy and poorly scripted, enacted “comic relief” scene with a taxi-driver at the airport that should have been declared dead on arrival). Soon the Indian mom is having a food feud with her future bahu, and hurling insults at her son’s Nigerian girlfriend and her family.

According to her, any Indian girl who can cook chhole bhature or aaloo paratha for her son is the best match for him – since a way to a man’s heart is through his stomach.

Didi’s family is no walkover either, so don’t go feeling sorry for them.

“You bring me an Indian?” Didi’s father Ernest (Richard Mofe-Damijo) had blurted out, spewing his drink all over poor Raj and the floor, when Didi introduces Raj to her parents, as if he’s just been served the wrong dish in a Michelin-starred restaurant.

But all this is done lightheartedly, poking fun at the cultural fabric.

Plot twist, Didi’s father runs a huge legal firm where heir-apparent Didi doesn’t want to work. She would rather use her legal skills to help abused women for an NGO, whose director, Leila, is Raj’s cousin (cameo by director Hamisha Daryani Ahuja).

Further plot twist: Didi’s father wants her to marry another well-mannered, kind Nigerian lawyer in his firm, Somto (Ibrahim Suleiman), so he can retire and pass the baton to the next generation.

Throw in the requisite “bitchy” enemy – Preemo (Osas Ighodaro Ajibade), a lawyer in Didi’s father’s firm who has career aspirations of her own and resents Didi’s claim to the throne, and you have a B-grade Bollywood drama.

What ensues is the usual back and forth tamasha between families. Do the two earn their parents’ blessings and win the day? Guess you’ll have to see it to find out!

Hunky Mustan (known for his role in ‘MP3: Mera Pehla Pehla Pyaar’) and the voluptuous Dima-Okojie, who light the screen up together and apart, act suitably bemused at the formulistic goings-on, while the rest of the cast takes its responsibilities very seriously, maybe too seriously. Everyone seems to be over-acting and hamming all the time. Didi’s boy-crazy best-friend Angie’s (Anee Icha) face is a miracle of exaggerated multi-expressions. She rolls her eyes, wriggles her lips and waves her hands constantly, all in the name of acting. However, Angie and Didi do share most of the movie’s comedic dialogues, which aren’t half bad.

Everyone talks as if they are reading from a tele-prompter, and trying not to laugh while also promoting Coke at every given opportunity.

The title “Namaste Wahala”– which means “Hello Trouble” – is a hybrid of both Indian and Nigerian languages. But the movie hardly highlights the Nigerian language, except a few times where Igbo (spoken in Nigeria’s south east) is chipped in at the end of an English sentence, mostly by Didi’s father. Didi’s mother who is Yoruba, and played by Joke Silva, doesn’t say anything in Yoruba as much as Raj’s doting amma chatters away in Hindi.

This is the movie’s shortcoming, its Nigerian characters really – disproportionately speaking English in a movie that should revel in the country’s multitude of languages.

But it’s not all bad. Not only does “Namaste Wahala” address violence against women as a serious issue, it looks at the complicity of structures and institutions that allows gendered violence to be maintained. It’s worth mentioning that Didi’s client’s case happened in Nigeria, where the justice system protects abusers and perpetrators for their immoral acts rather than aiding the victims.

It also highlights the class disparity that drives how justice would be meted out. If Didi wasn’t representing the victim, chances are that a case won’t see the four walls of a court.

Although it’s not peculiar to Nigeria, director Hamisha Daryani Ahuja has lived in the country long enough to observe these nuances, carefully inserting an anti-gendered violence message in a way that doesn’t distort the film’s principal themes.

There’s also some fun to be had in the festive, colorful, bright bouncy aura and the best sequence comes after the end-credits, as it always does (after the Big Fat Bollywood Wedding-Dance) where the hero’s Indian mother asks the heroine’s Nigerian father for dahej (dowry).

But the best dialogue in the entire run-of-the-treadmill fare is between the heroine’s mother and heroine’s bestie. Mom puts her hands on man-preying bestie’s buxom chest and counsels, “Nobody buys the cow when he can get the milk for free.”

Screenplay by Diche Enuwa and Temitope Bolade-Akinbode manages to capture the shades of both the Indian and Nigerian culture fairly adequately.

All this being said, “Namaste Wahala” is no earthshaking directorial endeavor. At the most, it is a mildly enjoyable, cute concoction, of a boy-meets-girl-in-Nigeria.

“Namaste Wahala” is available to watch on Netflix.

Anu Ghosh immigrated to the U.S. from India in 1999. Back in India she was a journalist for the Times of India in Pune for 8 years and a graduate from the Symbiosis Institute of Journalism and Communication. In the U.S., she obtained her Masters and PhD. in Communications from The OhiThe 16-year-old New Yorker has a romance with poetry and a passion for social justice.o State University. Go Buckeyes! She has been involved in education for the last 15 years, as a professor at Oglethorpe University and then Georgia State University. She currently teaches Special Education at Oak Grove Elementary. She is also a mom to two precocious girls ages 11 and 6.

Out of Africa: Intercultural Love Story ‘Namaste Wahala’ to Stream on Netflix on Valentine’s Day